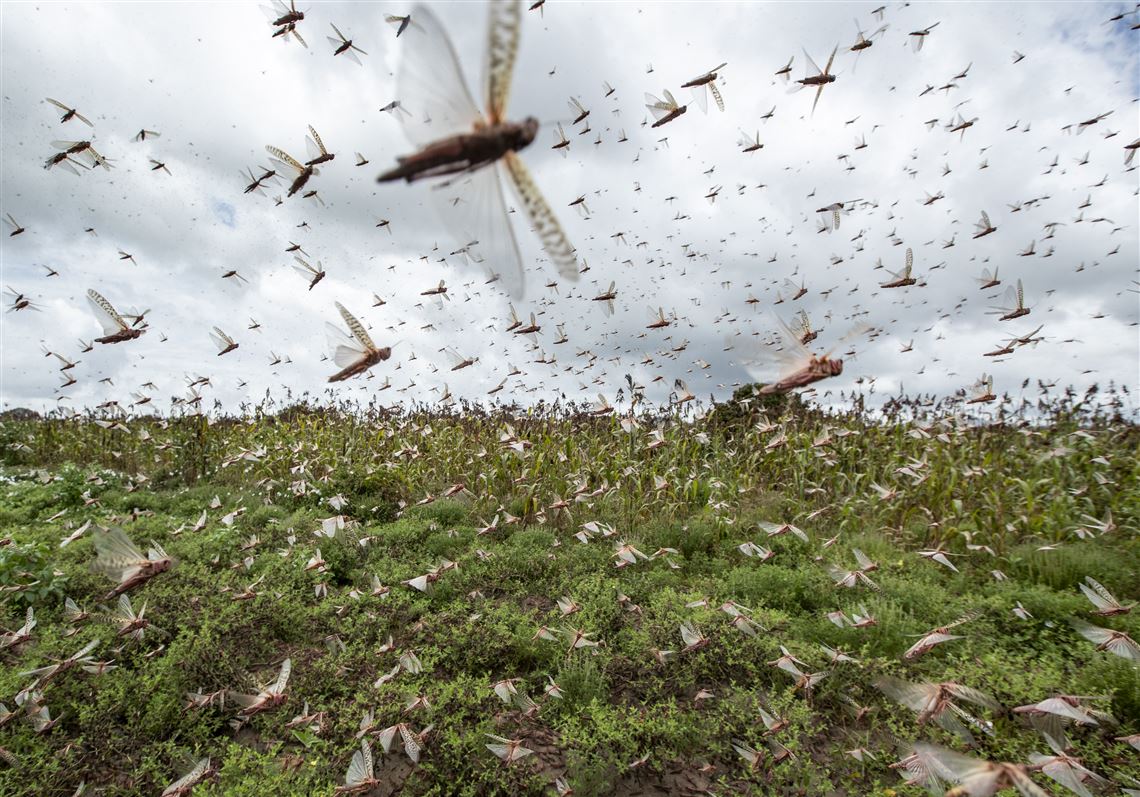 In the modern-day language, when we talk of going to the bush, the picture one gets is guerrilla warfare. But in traditional Africa, it may also mean something very different. That is, the ‘bush washroom’. And, as unsanitary that facility can be – actually is—it is at the same time a source of many functional observations, going even beyond UNEP concepts. One of them translates into a warning. It says: “A plant shoot that will splash feces at you is the one you depress with your foot while helping yourself.”

Normally, one would have expected other susceptible countries like Kenya, Uganda, Tanzania and South Sudan within the East African Community (EAC) bloc to see it coming. It is said when you see your neighbour getting a problematic haircut, make (your head) ready. But this did not happen. May be it is because to most of the sub-region’s second generation leaders, the desert locust experience is not something they remember. That is, if they know it.

Their keen attention could thus have been drawn by the second alert in early February, this year, when FAO re-asserted three hot-spots of threatening locust activity. The first was the Horn of Africa area pointing at the possible inclusion of Kenya, South Sudan and Uganda.

The second spot followed continued growth of infestations along both sides of the Red Sea bringing in the highlands of Saudi Arabia, the coast of Yemen, Indo-Pakistan border, the eastern coast of Oman, and south to Yemen.

The third was in southwest Asia mainly embracing Iran. Having survived from the locust plague in 2019, Iran proclaimed that it was fully focused to address impending infestation threat along the FAO predictions to the letter. The country has also an experience of the pest attacks in 1963-64 and 1993-94, causing heavy damage to the country’s farms and agricultural production.

It was not until the second week of February after what one could call a final alert from FAO that Kenya, Uganda (and Tanzania still a doubting Tom) woke up to the desert locust truth. There is need to update the region’s leadership across the board on the genesis, purpose and operations of the Desert Locust Control Organisation for Eastern Africa (DLCO-EA).

Established by an International Convention signed in Addis Ababa, Ethiopia, in 1962, DLCO-EA stands for the integrated pest and vector management to ensure food security in Uganda, Kenya, Tanzania, Ethiopia, Sudan, South Sudan, Eritrea, Somalia, and Djibouti. The Headquarters is in Addis-Ababa, with each member country having a Control Reserve Base (CRB) and a Base Manager representing the Organization at Country level. Its mandate also includes other migratory pests such as the African Armyworm,the grain-eating and destroying Quelea quelea birds and the Tsetse flies.

However, much leaves to be desired when the member countries access its services as the last resort. Considering the nature of the desert and red locust problem, one wonders if this UN registered organization has a desk at the African Commission when it is also based in Addis. What makes it sort of operate as relatively exotic?

I don’t know who reads the Bible or Quran at the UNFAO head office in Rome.  But the latest organization’s report, in trying to enlighten the world about the nature of the locusts’ problem, refers to four aspects. These include recession — when locusts are present at low density; upsurge — when several outbreaks have accelerated through breeding; and plague, when widespread and heavy infestations last for more than one year. Locust infestation is mentioned many times in both the scriptures as the plague.

This article is not meant for delivering religious knowledge. Not even entomology either. But a closer look at the most recent FAO figures issued in the first week of February covering the 1926-2019 period, other things remaining equal, reveals there a clear link between upsurge and plague cases. Cycles are equally clear. After the upsurge comes the outbreak. And the steeper the upsurge volume curve, the more likely the higher the number of outbreaks. In other words, within the present circumstances of 76, the world should expect more infestations, which in the event of lasting more than one year will assume plague status.

The bottom line of this is food shortage, and famine at the worst. The worst swarms of desert locusts in decades are now decimating crops and pasture across the Horn of Africa – an area covering Djibouti, Eritrea, Ethiopia, and Somalia – and beyond, threatening the food security of the entire sub-region. But it is the Horn of Africa that is of most concern, the FAO says, with the locusts breeding so fast that numbers could grow 500 times by June.

Somalia has declared a national emergency in response to the crisis. It is the second country to do so after Pakistan, where the insects have ravaged cotton, wheat, maize and other crops in eastern areas.

The words of FAO’s senior locust forecasting officer, Keith Cressman, should be taken very seriously. “We’re most concerned about Kenya and Ethiopia because these are the two areas that have very large swarms.  In addition, in Ethiopia, there is breeding going on so there are locusts increasing in number.”

Such swarms of locusts can be huge. They can contain up to 10 billion individuals and stretch over hundreds of kilometres. They can cover up to 200km (120 miles) in a day, devastating rural livelihoods in their relentless drive to eat and reproduce.

Even an average swarm can destroy crops sufficient to feed 2,500 people for a year. The last major upsurge – a sharp rise in the number of swarms – in West Africa in 2003-05 cost $2.5bn in harvest losses, according to the UN. But there were also large and damaging upsurges in the 1930s, 40s and 50s. Some of them spanned multiple regions, reaching the numbers required to be declared a “plague”.

Overall, the FAO estimates the desert locust affects the livelihood of one in 10 people on the planet – making it the world’s most dangerous migratory pest. Some swarms have crossed the border into Uganda amid FAO warnings that the upsurge could become a regional plague if not tackled.

The pests had already destroyed more than 175,000 acres of farmland in Somalia and Ethiopia by the end of December. Figures are unbelievable. They are eating 1.8m tonnes of vegetation a day across 350 sq km (135 sq miles), the FAO says.

Authorities in the region now fear the locust crisis could lead to a drop in agricultural production, further threatening food supplies in an area already on down on its knees due to flood and drought. More than 20 million people in the region could be affected, the UN cautions.

The UN has called on the international community to provide about $75 million to finance aerial spraying of pesticides in East Africa amid a warning from World Food Programme Executive Director Beasley that if countries “do nothing” now, they will be forced to spend 15 times more money to feed the millions of people “devastated by the loss of their crops and livelihoods…” With or without desert locust control systems and contribution levels, what matters in the first place is the most accurate monitoring. This demands cross-border options, which cannot work in places like Somalia or Yemen due to lack of security. How can this be done with terrorists on the ground? Sooner than later, the African story of a “bush washroom” will come on stage. Finally, no one country can win the desert locusts war. The pests are born in one area, can multiply in another and cause problems somewhere else. Country borders don’t apply.