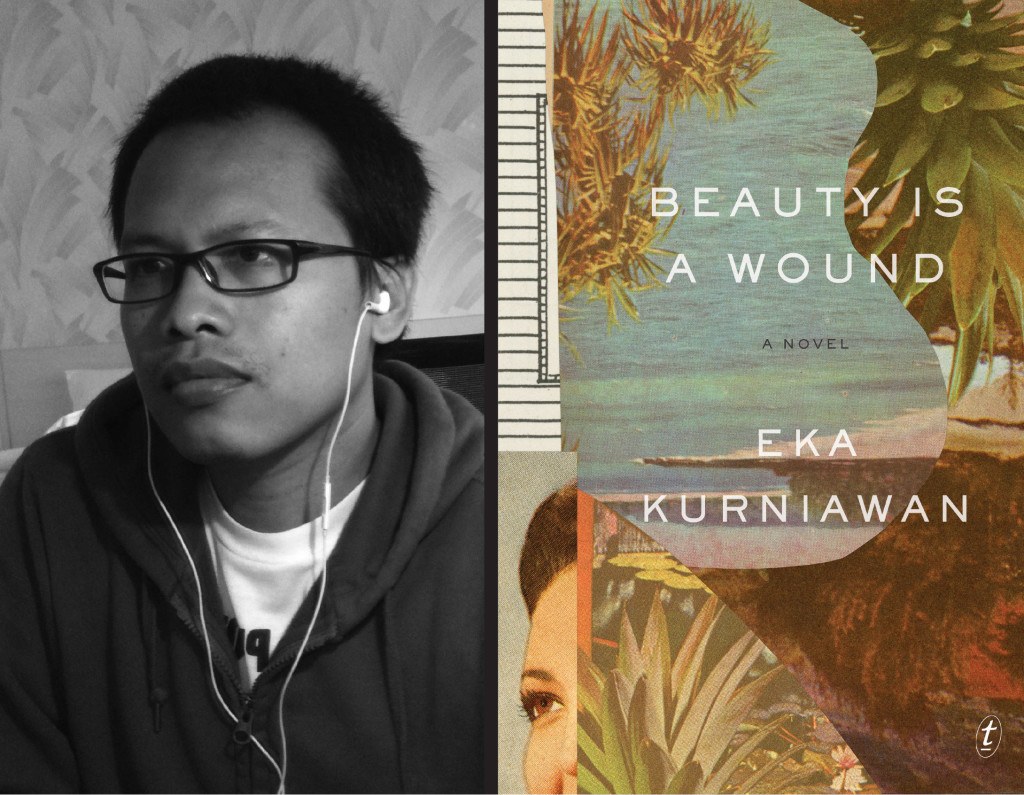 (A pre-discussion of Eka Kurniawan’s Beauty is a Wound)

The evolution of Indonesian literature is more exciting than that of the Malaysian, let alone Singaporean from the “thick-descriptive-Geertzian-big emotions-intensity-of-narrative arcs – because ( if we are to contend that good literature needs to show depth-of-despair, dying, and death as catharsis as opiates and dramatic eruptions) of the former’s history of such bloody and profound transformations, beginning with the ancient kingdoms, the Hindu-Buddhist political-philosophical dominance (see the wealth of literature on statecraft in Java, for example), to the war between the maritime powers, the arrival of the Dutch primarily and the establishment of Batavia (Betawi) as a trading post of the Dutch East India Company, to the more than 300-year enslavement of the Javanese and others by the Dutch, to the arrival of the British in the area and the struggle of the colonial powers, to the demise of the kingdoms, and the arrival of the Japanese to the intent to build and Indonesia Raya with the passion and collaboration shown by Achmed Soekarno and Hatta via the Nipponization of Indonesia and of course Soekarno’s campaign of “Ganyang Malaysia “_Crush Malaysia), to the surrender of the Japanese surrender after the loss of the Axis Power of Germany-Italy-Japan, to the complex and bloody struggle for Indonesian independence and next, even bloodier, the CIA-backed Suharto massacre of more than half a million Indonesians in a purge against so-called “Communists” so that General Suharto the “Bapak Judistira”, fashioned after the story of the Five Pandawas, can help the Americans siphon oil money out of Indonesia with the advice of the “Berkeley-Mafia” economists of the Kennedy Era …. the rest is history, right till today, Indonesia is blessed with a Heavy-Metal Metallica-loving president Bapak Jokowi who plays the bass guitar for a Metallica-inspired band …. such exciting history of the Muslim-fundamentalist strong and perhaps South-East-Asia endangering country bent towards ISIS.

Such fine historical evolution of the dialectics of social change that Indonesia’s literary evolution, from the time of the enculturalization of the Ramayana to the age of the wayang and the “Islamization of the Ramayana” to the emergence of the poets and prose writers of Peojangga Baroe (Pujangga Baru) or the primacy of Takdir Ali Syahbana, Boeya Hamka, and the emergence next of the fiery writers of LEKRA (Lembaga Kebudayaan Rakyat) of Prameodya Ananta Toer, of the 50s (which influenced the birth of Malaya’s ASAS 50 (Kassim Ahmad was one its pioneers), to the literary force provided by Chairil Anwar and next came the 60s Hippie-Days poetry of WS Rendra, prose of Putu Widjaya, the stories of urban life weaved by Muchtar Lubis, Sutarji Calzoum Bachri, and the emergence of the writers of the 80s such as Supardi Djoko Damono and as time and literary periods proceed, responding to the temper of the day we see more and more exciting writers who still, like their forefathers such as the Rimbaud-influenced-existentialist poet Chairil Anwar, these new modern writers, singing the rock songs of Achmed Akbar of the prog-rock band God Bless or the radical tunes of internationally-acclaimed public-rocker-intellectual Iwan Fals, these new and equally fiery writers so to speak, write as if they “write in blood, write naked, and write in exile” … about the things around them. And then we have Eka Kurniawan, interesting new blood bringing a new perspective of radicalism.

I took a deep breath, after finishing my reading of Eka Kurniawan’s mystical-magical-historical-satirical fiction Beauty is a Wound (Cantik Itu Luka). Closed my eyes for a few minutes to first let a cognitive map of the style, form, and craft emerge, and next allow the memory of my childhood growing up in the village in which the Javanese culture (although I am partly Bugis whose ancestry goes back directly-seven-generations to Raja Haji the rabble-rouser of Sulawesi) is a dominant feature of the inhabitants of my village in Majidee Johor Bahru.

Although the 470-page novel is a translation, I did not find the story a “lost-in-translation” piece of work. I am all too familiar with the setting and the context of how the characters operate albeit having to work harder in thinking about the culture of the Soekarno era.

Words such as “dukun”, “orkes Melayu”, “preman”, “becak” and a few others used in the translated version brought me back to the enriching and enchanting worldview of the Indonesian-Malays primarily of the Javanese, and more word-associations formed in my mental image vis-a-viz the story, momentarily taking me away from another culture — the American culture — that has become part of me after spending more than half of my life in it.

The shifting of worldviews, of one culture to another was smooth and even poignant and nostalgic as I emerge out of the literary world build by the author. Nostalgic in the sense that the elements of Javanese and Malay magic — of divining, spirit possession, spiritual healing with mantras in old Javanese and Arabic combined, and of the rites, rituals, tools of work and play used by the “dukun” (spiritual healer), of the cultural practices of healing (or even voodoo-ing) — these bring back fond memories of those vicarious moments of learning as well as of immersing myself in the hidden and informal out-of-class curriculum of my life-long learning experience.

In short, from a very young age, I was immersed, like a little postmodern flanuer, in my fascination with Malay-Javanese mysticism — elements that shape and color Eka Kurniawan’s novel.

I wanted to have the power of the “dukuns” and become invincible and powerful and cool and feared, as such as Si Buta Dari Gua Hantu, Si Gondrong, Mata Malaikat, and many of the movie characters of the Javanese magical-warrior class/Kshatriya class, imbued with superhuman powers. I wanted to fly invincibly and be shot with a hundred bullets of the Dutch (like my great-great-grandfather Raja Haji who died as such) and not die hurt at all. I wanted to go into other people’s bodies and souls, and see the future, and also cast and break spells. If I were Javanese, I wanted to become the Arjuna-Krishna hybrid of the Nine Javanese saints or the Wali Songo or the Wali Sembilan: pure, pristine, and pirate-of-the-Caribbean-type of gung-ho-Shaolin masters. That type. I wanted to kill my enemies without even touching them. That cool of a warrior.

My dream as a child of perhaps thirteen.

The dream of being “a beautiful warrior and wound others”! Ahaaa –beauty is a wound indeed.

Herein lies the aspect of Eka Kurniawan’s craft I will discuss further in the next part: the crafting of the mystical into the real and the story of vengeance whilst portraying the actors as if in a Bakhtinian carnival — of the grotesque and the evil.