HomeHeadlineAbusing the headscarf in Turkey polls?
HeadlineTop Stories On Turkey

Abusing the headscarf in Turkey polls? 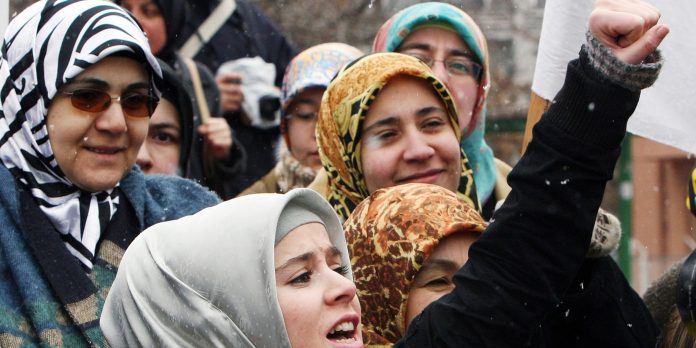 Just a day before the Turkish Parliament went back into session after the Summer recess, the main opposition Republican Peoples Party (CHP) chief, Kemal Kilicdaroglu, revealed he was tabling a bill amending the constitution to enshrine women’s right to headscarf wear. Why? That was his gear to corner (or rather set a polls loop trap for) the ruling Justice and Development (AKP) Party.

On the next day, the day that mattered and in the right AKP Parliamentary environment, Turkey President Recep Tayyip Erdogan jumps on the forthcoming polls wagon. He does the same. Reason? To counter the CHP strategy by stemming it in the bud.

But does the headscarf really constitute today’s issue for the people of Turkey? The people, who are now risking their lives in the literally no-longer-knee-deep but neck-high socio-political-economic deadly storm waters.  Indeed, history repeats itself; or, as Africa’s indigenous knowledge observes: “Etera mbali elateire” – literal translation, “It (the lightning) strikes where it has hit before.”  What could prevent one from recalling the strong and enduring Byzantine Empire, which had all the same later come to be reduced to only a shadow of itself, as we read in chronicles?  How about the Ottoman Empire?

To be or not to be, the story is all about pitching present Islamist roots against the head-on secularism of 1923 and the current ‘hot puree pot’ in Turkey standing in defiance of all faith and religious tenets; political, good governance and rule of law principles; inclusive, tolerant democratic life; respect for minority and human rights; toeing the line of international laws and adherence to agreements which the country has been party. What could the crusaders, Byzantine and Ottoman emperors, Tsars, mercenaries, sultans, Mustafa Kemal Ataturk and Said Nursi tell us today if they were to come back on stage?

Taking the headscarf ‘scapegoat’ perspective what do we read between the lines of reigning Turkey’s political under currents? According to what we read in chronicles, the post-Ottoman strict secularist stand put aside, the 1980s saw the wearing of headscarves in public institutions being banned. In 2010 the ruling AKP ‘banned the ban’ at Turkish institutions of higher education – universities – extending it seven years later (2017) to employees in the public service.

But down-to-earth truth is that the ban no longer exists in Turkey. So, what is the perceived problem all about? And for that matter, neither the ruling nor opposition parties have the right to cling to it.  The true story behind the headscarf is told by Prof. Dr. Salih Kuk. He says “the headscarf ban was not lifted by AKP” but by the “Head of Department of the Council of State Judge Kasim (who) lifted the case … (after declaring) that he is a judge with a statutory decree…”  Then Prof. Dr. Kuk goes on to enlighten the world by a question: “And still did you know he is in jail?”

So, CHP and AKP have no grounds on which to make any claims about or reference to the headscarf issue other than playing on people’s religious sentiments for personal gains?  This time round, AKP’s Erdogan has tried to portray CHP’s Kilicdaroglu as “confessing … the struggle we have waged our entire lives…” He challenges his “honesty about the headscarf” in whose respect “then let’s find a solution at the level of the constitution, not the law.”

That far, don’t Erdogan’s words point an accusing figure at him? Which Constitution is he talking about when he is the constitution himself? He is the last AKP leader one can trust with the Turkish Constitution. At least he is sincere with the law when he rules that one out because he is the prosecutor, judge and prison warder. There is little doubt that Kemal Kilicdaroglu is dampening Erdogan’s tricks. But both recognize the strength of faith among the Turkish people and Erdogan wants to ride on these feelings for political gains.

This is where one would agree with views of Turkish journalist, Can Dundar, living in German exile. He says: “OK, let’s stop the abuse of the headscarf. But on the day when inflation has broken a historic period. When the country is collapsing under poverty and when the world is welcoming the resistance of Iranian women, should that be our agenda?

“Should conservative voters trust those who scare them saying. ‘they will ban your hijab if we leave? Or those who want to create legal guarantees so that no one can ban the headscarf anymore?”

Commenting on Erdogan’s announcement, former journalist, Ahmet Sik raised a pertinent point when he said…” you can’t fight the right by becoming right yourself. The antidote to right wing politics is not right-wing politics.” |

Muharrem Ince, former CHP member and presidential contender who now chairs the Fatherland Party said: “We are against all forms of domination over women’s clothes and bodies. In this country there is hunger, poverty, injustice, corruption, prohibitions and the problem of asylum seekers. The headscarf problem in Turkey has been solved… To put the headscarf problem before these problems is both a genuflection to the political opponent and ignorance of politics.”

In some quarters, President Erdogan’s sincerity was questioned in the circumstance of what has been expressed as hypocrisy since scores of women in headscarf gear have been arrested, strip searched and imprisoned and held in detention centers on claims of belonging to faith-based Gulen Movement.

All said, one is left wondering what is happening between the ruling AKP and main opposition CHP over the headscarf question which the majority of the people all agree is a non-issue. And why now? Available data says: “The High Council of Judges and Prosecutors (HSYK) changed the regulation on June 1, 2015, allowing female judges wearing headscarves to conduct hearings.”

Politics in Turkey, particularly now as the country heads to the parliamentary and presidential polls, cannot live on headscarf tricks but on everything related good governance and rule of law principles; inclusive, tolerant democratic life; respect for minority and human rights; toeing the line of international laws and adherence to agreements which the country has been party. That is the best equation for poll victory.