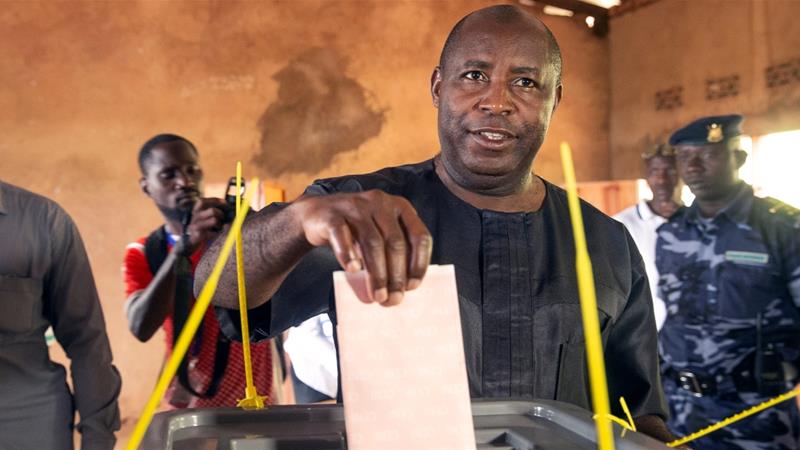 What a change of heart!? As Head of State, Pierre Nkurunziza – the leader who turned tables on the Burundi Constitution to get a third term in office—decides to step down. He names his student, whom he is reported to have also recruited in the CNDD-FDD then rebel group now political party, Evariste Ndayishimiye, to stand for presidency.

Come the elections, Evariste Ndayishimiye is declared winner at 68%, claims of fraud from the opposition and the Conference of the Bishops of Burundi notwithstanding. The East African Community (EAC) grouping in which Burundi is a member along with six other states, gives the polls a clean bill as opposition National Freedom Council (CNL) party leader Agathon Rwasa (22.42%) hints on the possibility of approaching the East African Court of Justice.

On his official Twitter account, Pierre Nkurunziza says: “I warmly congratulate the president-elect … Evariste Ndayishimiye for his big victory, which confirms that the great majority of Burundians adhere to the projects and the values he embodies. …We are privileged witnesses to history. May God bless Burundi!” Retiring after 15 years in power in a move that literally caught many people napping, Nkurunziza praises his successor.

In the African context, the elections have something more than what meets the eye. They are the first in Burundi to be fully funded locally and definitely not common on the continent. The 2019 Human Development Index ranks Burundi the 185th out of 189 countries in the world. According to the United Nations, more than 65% of Burundians live in poverty with at least 55 % of the country’s 11 million people chronically food insecure.

As destiny would have it, it is the 8th June, 2020, Pierre Nkurunziza dies suddenly. His death is attributed to “cardiac arrest”. Putting complicated medical terminology aside, this simply translates into failure of one’s heart to function for long a time that is sufficient to allow or cause a person’s death.

Every death is untimely. But that of Pierre Nkurunziza is more untimely than others. His wife is admitted to a Nairobi hospital in Kenya suffering from COVID-19. There are unconfirmed reports of him having experienced breathing problems and a request for ventilator that came too late. Then we are told of hospital last respects! But that is not the subject matter for this article. What is the subject is that Pierre Nkurunziza dies two months to his official retirement time.

The Burundi Constitution provides that if the Head of State dies in office, the president of the National Assembly should succeed him. This does not happen. And the president of the National Assembly does not raise hell about it. The man’s response is not normal among the essentially power-hungry lot of African leaders. He lets this chance go. He displays a good level of political maturity and wise reasoning.

Instead, consultations are made. The Burundi Constitutional Court makes a decision to push forward the swearing in by two months. Irrespective of what the Constitution says, here is a president-elect already in place. Evariste Ndayishimiye takes oath on June 18 at a ceremony held on the same site he is to come back eight days later to bury his predecessor, mentor and age mate. He has to balance between wearing a smile at the swearing-in and tears for a fallen friend at the funeral ceremony. This can be quite a challenge even for a retired Major-General as well. We wait and see.

During the oath taking, President-elect Ndayishimiye  vows: “I will not fail the unity charter, the constitution and other laws, will uphold unity among Burundians , peace and justice for all (and) fight the ideology of genocide and discrimination.”  Effects (and excuses?) of COVID-19 ignored, there is conspicuous absence of the opposition leaders. This is the very first challenge to the new president’s vow to “uphold unity among Burundians”.

In his inaugural address, Ndayishimiye pays befitting homage to Nkurunziza and promises to follow in his path. He shows practically little difference from his predecessor. He hits at the international community for nose poking in the politics of Burundi. A glare of hope from an optimistic point of view perhaps lies in the new president’s distance from the post-2015 human rights abuses that left 1,200 people dead and sent more than 400,000 fleeing their country.

A quick scan through Nkurunziza’s era lands on Burundi coming close to another ethnic conflict in 2016 prompting the African Union to deploy a 5,000-strong African Prevention Protection Mission. This did not work. Nkurunziza objected to it. Consequent to cutting off of aid, some foreign media were barred from working in Burundi.

Come the International Criminal Court (ICC) investigation into crimes against humanity in 2017, Burundi became the first country to part with the Rome statute which established the ICC. Last year it plucked courage to close the United Nations Human Rights office, which had been working in the country for more than 20 years on the basis that the country had already made commendable progress on the issue. When the World Health Organization earlier this year demanded coronavirus figures, Nkurunziza sent them packing.

Otherwise, Burundi under Ndayishimiye still stands trapped in many African countries’ misguided concept about the opposition and civil society groups that hold different opinion from ruling parties. A second year law student escapee from death at the hands of Tutsi killers, he unfortunately argues: “What is a political party that doesn’t agree with the government? What other government does it serve?”

The late Nkurunziza died at the age of 55 and was laid to rest in a mausoleum built at the Ingoma Stadium in the Gitega Capital during a State funeral attended by several foreign dignitaries, including Tanzania’s Fourth Phase Government President Jakaya Mrisho  Kikwete and Prime Minister Kasim Majaliwa. Other foreign delegations came from Congo Brazzaville.  In attendance were also former Burundi presidents, Domitien Ndayizeye and Sylvester Ntibantunganya and main opposition National Congress for Liberty leader Agathon Rwasa.

President Evariste Ndayishimiye told a packed stadium that he had lost “a great adviser.” In tears he told his fallen predecessor: “You leave me here a great burden to develop the country.”

Nkurunziza’s wife Denise Bucumi eulogized:  “I personally have lost my love; children have lost their parent. I thank God for giving us strength to be standing in these hard times, after suddenly losing someone you love.”

What can be learned from born again Pierre Nkurunziza? He left all that he wanted at the table. He had a very rich retirement package – call it a menu if you like — comprising a  title of “Supreme Leader” literally pitching him above a  reigning Burundi president, a $530,000 handshake, a luxury villa and a generous lifetime salary.  All this had already been passed by parliament. What will happen is not the subject of this article. But it is worth reflecting upon by those in search of destiny for themselves, their families and hopefully their countries.