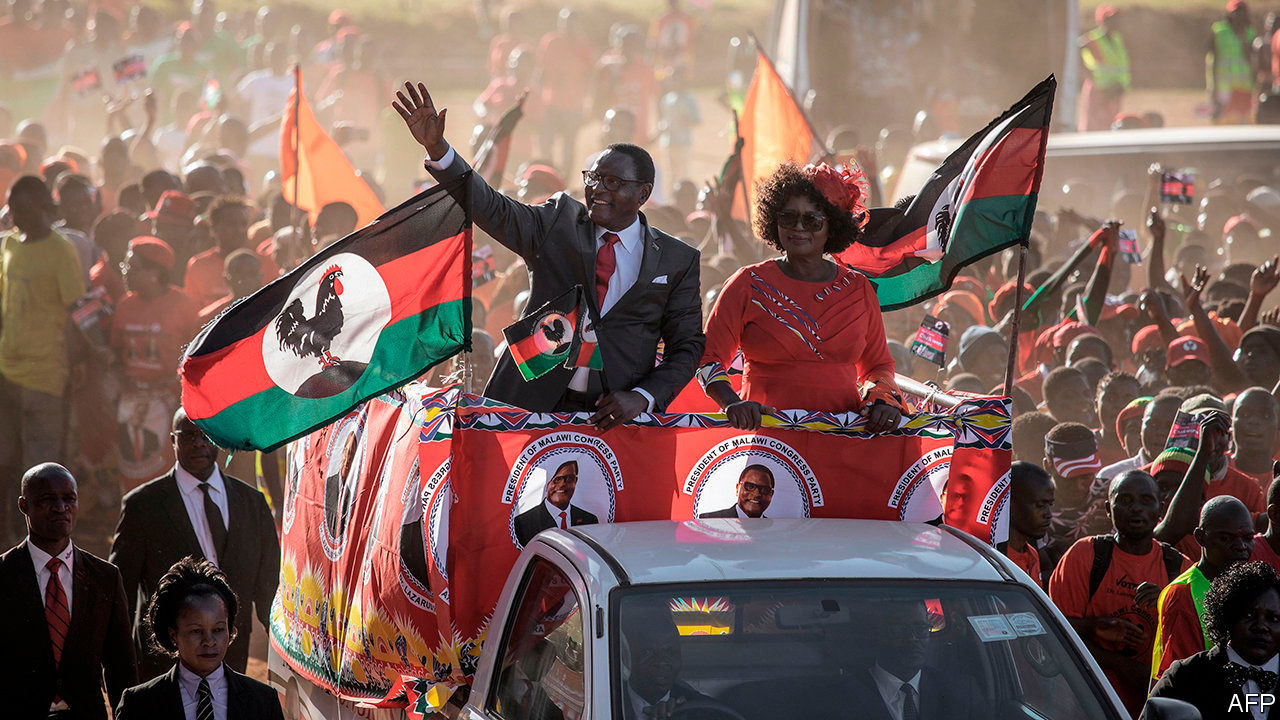 It’s 2020. Africa is in a decade of presidential, parliamentary and local government polls as political party leaders sort of make a date with destiny for themselves and, hopefully, their countries. And as Pliny The Elder, that Jim Reeves’ type of senior ‘bachelor boy’ and prolific Roman author, said 1,941 years ago, the story is: “Ex Africa semper aliquid novi” — from Africa always (there is) something new.

The very latest is from Malawi. The Great Lakes Region country has just made African history. Set in motion towards mid last year when it became the second on the continent – after Kenya—to annul presidential elections, it has climbed the ladder to Number One. The incumbent Head of State, President (Arthur) Peter Mutharika, lost in a poll mistakenly represented by some media as a “re-run”, just as the world mesmerizing Ngorongoro Caldera in northern Tanzania is taken in the world tourism market as a Crater, which it isn’t.

The Malawi poll was just a fresh one. This is where some media houses failed in court reporting, which is normally the profession’s starting point for ‘cab’ reporters. What the panel judges, sitting as a Constitutional Court, ruled in a 500-page judgment read for about ten hours was to castigate the Malawi Electoral Commission for its incompetent and improper management of the entire presidential election process and call for fresh elections – not re-run — within 150 days.

So, come June 28 Lazarus Chakwera of the Malawi Congress Party (MCP) won the country’s fresh presidential poll at the head of a nine-party opposition coalition, tagged the Tonse (Together) Alliance with Saulos Chilima (former vice-president) of the United Transformation Movement (UTM) as a running mate.

There are many lessons for Africa, its leaders, political parties, the judiciary, police, national electoral commissions, the army, civic organizations and the international community to pick from the Malawi experience.

One, an interesting aspect is that all this is unfolding in the land of Dr. Hastings Kamuzu Banda, Malawi’s first Prime Minister and President, who made the country a one-party state, declared himself a life president and stayed in power for three decades.

Two, the Malawi Congress Party (MCP) is originally Dictator Kamuzu Banda’s party. It is the party that the people of Malawi threw out of the window in 1994 in their quest for reverting to political pluralism.

Three, if only the opposition in Malawi could have come to grips earlier with the situation on the ground, the presidential poll verdict in the annulled election could have read Tonse Alliance 55.65% (their total share) against DPP’s 38.57%. The game could have ended right there. The people would never have been called back to a fresh ballot, placing an extra burden on the already over stretched economy of a Least Development Country (LDC).

So, to some extent, the opposition is sometimes responsible for political failures in their countries because of selfishness for power. The fresh poll verdict that the opposition alliance won, 59% of the 4.4m vote cast, should be enough to illustrate this point.  With utmost about 40% of the votes, incumbent (now former) President Mutharika could not establish any base for contest against the verdict.

Four, elections rigging takes many forms. Besides interfering with the vote counting, incumbent government leaders also do their best to ensure that state organs like the police, the army and the judiciary are not sympathetic to the opposition parties’ activities like street protests or arrested protesters.

In Malawi it could only take independent judges not only to castigate the behaviour of fellow professionals entrusted with supervising the constitutional people’s right of voting but also to call for their replacement. The Chief Justice is on record for having approached the Malawi anti-corruption agency complaining of bribery attempts on the judges dealing with the case.

The police and the army, rather than crush any protest marches or resort to teargas instead turned out to guard peaceful demonstrators. Malawi is a clear indicator or sign of mature and competitive politics dawning on the African continent.

Prior to last year’s disastrous polls, President Mutharika is on record for having tried to keep the Malawi Electoral Commission set up intact, retire some members of the judiciary and the military. This did not work because senior officers succeeded to block respective presidential decrees through the court.

The Human Rights Defenders Coalition (HRDC) went to the court with strong cases of irregularities and without mincing words accused the electoral commission director, Dr. Jane Ansaha, of being partisan and biased. The electoral commission and the governing DPP appealed against the injunction. But the High Court of Malawi, in its verdict of the May 2019 election, overturned the results.

If I were asked to say what the Malawi election has achieved, I would just go for the comment of one Malawian who referred to it as “an entity that comprises a complex elite sits in the political saddle, while providing an opportunity for the judiciary, the electoral commission and the military to act in concert towards consolidating democracy in the country…”

Five, there is no honey mooning when dealing with national issues. The people have to ensure that those who have been entrusted with power deliver against their promises. Malawian youths have already sent a message to the new government. They are set for a peaceful demonstration in the middle of this month (July) to express their opinion that the government should not be run like a family enterprise.

This year will also see Burkina Faso, Central African Republic, Cote d’Ivoire, Ghana, Guinea, Niger, Seychelles, Tanzania and Togo go to polls. Burundi has just been through and is the subject of the next article on the other side of the African date with destiny. Parliamentary elections alone will take place in Chad, Mali, Ethiopia, Cameroon, Comoros, Egypt, Somalia, Liberia and Gabon.

The question at issue in most African countries lies in the amount of political space for the opposition and civic organizations. The opposition remains disunited at the loss of their voice in the exercise.

Africa also looks to have failed to find the right concept for the opposition. Opposition in politics is not synonymous with the school debate atmosphere of proponents and opponents. In the running of government affairs you cannot oppose a project simply because you belong to the opposition. At the same time, it is erroneous for political parties in power to sideline the opposition or treat civic institutions with mistrust. Every side has a positive role to play in national development. Today’s ruling can be tomorrow’s opposition party. And that does not make it anti-progress. Not at all.