HomeExpertsAfrica; the Russians have come
Experts

Africa; the Russians have come 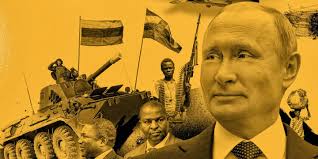 As a teenage Catholic, towards the end of the mid last century, I took part in a global prayer network revolving on the axis of the Blessed Virgin Mary request “to save the world from the Soviet Union.”

Short of that exercise, we were told, a threat hanged over world peace at the hands of the communists. “The Year 1960” was the catch phrase or keyword. It was really very involving, but understood. You cannot be a communist and believe in God – a Catholic for that matter. To borrow fromthe Chemistry subject, the two have the same charge. So, they repel.

Those with some literary interest could recall those were also times of the Cold War hostility felt across the board in the contemporary global society. United States Secretary of Defense James Forrestal is quoted in literature as having allegedly said way back in 1949: “The Russians are coming. The Russians are coming. They’re right here. I’ve seen Russian soldiers.”

With or without the allegations, the fear of Russians message was delivered. It also brings to light the Latin literature style of “bis repetita placet” – literal translation, it pleases to repeat twice. The style is still here with us in hymn lines bearing “bis” marks.

A novel, The Off-islanders, was written by Nathaniel Benchley based on, call them if you want, the Forrestal dreams. And a prize winning film: “The Russians are coming; the Russians are coming” was produced. Very briefly, the film is about a Soviet Navy submarine, Octopus, drawing close to the New England coast. Its captain wants to take a good look at America. Those were the analogue days.

Come the digital age, the Russians are at it again. It is no longer a fairytale. As African indigenous knowledge observes, “the thief has been caught (in action) at the stem of the banana plant.” Another Nathaniel, this time round Facebook’s head of cyber security, reveals the closing of Russian-backed influence networks in Africa.

Nathaniel Gleicher reveals the target countries as Madagascar, Central African Republic (CAR), Mozambique, DRC, the Ivory Coast, Cameroun, Sudan and Libya. He charges that the aim of all this is “to promote Russian interests in the region while meddling in the internal policies and criticizing French and US policies in the region.”

To implement this programme, Gleicher further reveals, they created about 200 fake and compromised accounts attracting more than one million followers.

This is definitely not good news for Africa. Mozambique, which is one of the targeted countries, went through presidential elections in October, this year, ending in a disputed 73% victory of President Filipe Nyusi.

According to the Electoral Institute for Sustainable Democracy in Africa, sixteen countries, which are  set to go to the polls in 2020, which is around the corner are, Burkina Faso, Burundi, Cameroun, the Comoros, Ethiopia, Gabon, Ghana, the Ivory Coast, Mauritius, Namibia, Tanzania Mainland and Zanzibar, the Seychelles, Somalia, Sudan and Togo.

Among them, those which are on the Russian target list and are yet to go to polls are Cameroun, whose National Assembly, Senate and Local council polls have already been postponed twice; the Ivory Coast and Sudan.

A quick zoom on the Ivory Coast politics lands on an electoral commission declaring Alassane Quattara the winner of a run-off in 2010.  Mr. Laurent Gbagbo refuses to quit and is removed from office. Post-election violence leaves 3,000 people dead and 500,000 displaced. Al-Qaeda jihadists attack a beach resort near Abidjan, killing 18 people. In 2015, Mr. Quattara wins a second five-year term.

The Russian choice of targeted countries is not a shot in the dark. It is a very informed one. For example, the Ivory Coast is a former French colony being ruled by a United States trained economist as president. It provides a positive site for a Russian programme for, among others, criticizing US and French policies in the region.

Echoes of the Sudan affairs are yet to die. The country of late went through the worst turbulent unrest for months until the military stepped in, ousted President Omar al-Bashir and later charged him with incitement and involvement in the killing of protesters and corruption. Africa’s most wanted man by the ICC, al-Bashir, has been indicted on corruption.

Sudan, like the Ivory Coast, has been torn into two by Africa’s longest civil war. As a former British colony, it provides a fertile ground for taking a long range focus on US interests through the activities of its NATO allies on site. Sudan also rich in natural resources – oil in particular.

Madagascar and Cameroun have a very strong French scent. CAR and DRC have rich natural resources. Mozambique is ideal if one looks forward to poke into the other non-targeted other SADC countries. Libya is a straight case or ‘best bite’ for the Middle East region.

The other side of the coin is in respect of the just ended two-day Made in Russia Sochi Summit during which military hardware was on display. Even looked at from the various sittings of the African Union (AU) its attendance is enviable. Leaders of 43 out of 54 member countries of the AU were there.

If anything, their host, President Vladimir Putin, displayed what could be looked at as his African power play. He reveals having signed military agreements with 34 countries alongside deals for military helicopters, jets and armoured vehicles.

Putin touts military aid and economic projects putting the level of Russian trade with Africa doubling in five years to $20billion and hinting the story could repeat itself in another five years. Russia is Africa’s largest arms supplier.

African nations account for 40% of the export orders with combat jets, gunships, BUK missiles and S-300 surface-to-air missile systems accounting for 80% of the purchases.  Putin said he had signed military and technical co-operation agreements with more than 30 countries. He was quoted as saying that some of the supplies will be dealt with on a ‘free-of-charge basis’, which is very highly questionable because there is no free lunch in business. Moscow has also struck deals for provision of military expertise and training.

He sort of calibrated the full bait for African countries by going into areas such as joint efforts “to combat extremism by exchanging information between security agencies.” Heaven knows what African security agencies can exchange with the Federal Security Service (FSB) of the Russian Federation under the leadership of former KGB boss now holding top powers at the Kremlin.

All said, Russia, whose link with Africa during the Cold War was essentially in terms of economic and military aid, has made a step forward after Sochi. But it remains the duty of African countries to choose the engagement model. Russia has the module. How does Africa jump on board? Is it really through the arms deals?

Does Africa really need all the arms it is purchasing from Moscow? For which war are they doing it? Do African leaders need a replay of the 1949 US Defense Secretary James Forrestal “The Russians are coming” dreams to realize facts that are on the ground on the continent? The African people want development; not arms.