African scramble for Europe in style 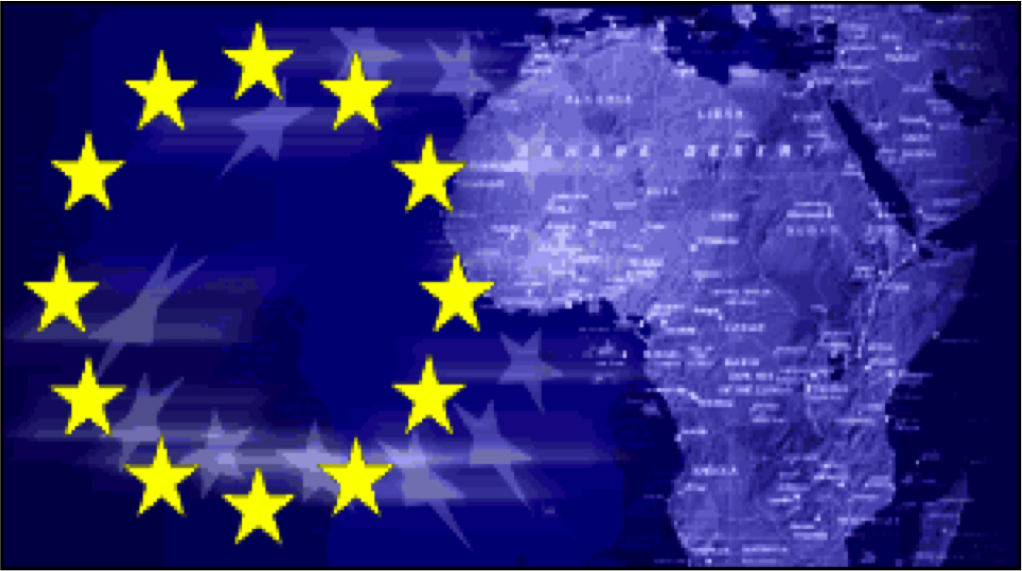 Life in Europe seems to have come to an end. Factories ran short of raw materials. Home markets have reached a saturation point. Something urgent must take place for survival. It’s destination Africa. That was in the 1870s and early 1880s.

British, French and German scouts go out for treaties. Portuguese and Belgian agents are hired to claim big tracts of land. Imminent conflicts of this competition recorded in history as the Scramble for Africa lead to roundtable talks chronicled as the Berlin Conference. The modus operandi is intrigue and compulsion.

In the context of this article and Africa, that conference trashed the Polish “Nihil de nobis sine nobis” or Austrian “Nic o Nas bez Nas” – both meaning “Nothing about us without us” principle. It also agreed to allow free trade among the colonies and established a framework for negotiating future European claims in Africa. By 1900 it is recorded that nearly 90 percent of the African territory had been colonized.

Today there is not a single colony remaining. Africa is independent. But the trade inimical component of the Berlin Conference has stood the test of time. It surfaced in the post-Great Depression World War II instruments that established the General Agreement on Tariffs and Trade (GATT) way back in 1948. Seven decades down the history lane, it still operates between Africa and former colonizers as the World Trade Organisation (WTO).

What is of particular interest is not the state of the WTO. This is an institution that has practically outlived its objectives and aims. But a dip into its history helps. WTO is an intergovernmental organisation regulating international trade. It started working in January 1995 under the Marrakesh Agreement which was signed by 123 nations replacing GATT.

Along the UN spirit and letter, “WTO deals with regulation of trade between participating countries by providing a framework for negotiating trade agreements and a dispute resolution process aimed at enforcing participants’ adherence to WTO agreements, which is (are) signed by representatives of member governments and ratified by their parliaments. Most of the issues that the WTO focuses on derive from previous trade negotiations, especially from the Uruguay Round (1986–1994).”

The Uruguay Round was the biggest negotiating mandate on trade ever agreed. The talks sought to extend the trading system into several new areas, notably trade in services and intellectual property, and to reform trade in the sensitive sectors of agriculture and textiles. All the original GATT articles were up for review. The Final Act concluding the Uruguay Round and officially establishing the WTO regime was signed 15 April 1994, during the ministerial meeting at Marrakesh in Morocco, hence the agreement’s name.

GATT came on board in the wake of other new multilateral institutions dedicated to international economic cooperation. These are the World Bank and International Monetary Fund (IMF) commonly known as the Breton Woods institutions (sometimes sisters as well). Another international institution for trade was negotiated in the name of the International Trade Organisation (ITO) to specialize and address not only trade barriers but other issues indirectly related to trade, including employment, investment, restrictive business practices, and commodity agreements. Its treaty was turned down by the U.S. and a few other signatories. It went down the drain. GATT was now left to evolve into a de facto international organization. This can help explain the difficulties of WTO into which it evolved.

With appreciation and noting of what has taken place on the international scene, what has befallen, besieged, plagued or planted landmines on the African countries’ trade development route? Of necessity, Africa cannot ignore the importance of multilateral trade. This is a sine qua non. But the continent seems to suffer from the opposite side of the Scramble of Africa and the Berlin Conference, which, in some writings also, appears as Berlin West Africa Conference.

This brings us face to face with trading arrangements running under the EPA tar for Economic Partnership Agreements. These constitute economic partnership agreements address relations between the European Union (EU) and African Caribbean and Pacific States (ACP) and are essentially based on the 20-year Cotonou Agreement signed in 2002 – coming to an end next year.

Simpler put, EPAs are intended to support regional integration between ACP states, promote their development and contribute towards poverty eradication with negotiations being conducted on regional basis. ACP countries enjoy duty-free access to the EU market for which they have to open up their own by removing tariffs, exposing themselves to competition from EU producers and in the future, lower flexibility in increasing tariff leading to a fall in revenue from customs duties.

Downloading figures on the Southern Africa Development Community (SADC) economic bloc, the EU remains a major trading partner. According to the European Commission Trade Statistics, the EU “in 2016 received 26% of the total exports of the region (ahead of China with a 20.5% share); whereas supplies from the EU represented nearly 33% of total imports (followed by deliveries from China – almost 18%). At the same time, the countries concerned only accounted for a limited proportion of extra-EU exports and imports of 1.9% and 1.6% respectively.

The SADC countries most export mostly export mineral products, precious stones and agricultural products such as fruit and sugar. EPA countries are strong in exporting diamonds, South Africa, Botswana, Lesotho and Namibia those constitute a large to dominant share of their exports to the EU. EU exports a wide range of products to the SADC EPA countries such as vehicles, machinery, electrical equipment, pharmaceuticals and processed foodstuffs.

It is along these lines that one should support a decision by the East African Community Heads of State decision to allow member states to sign pacts separately with the EU if a joint deal is not reached in June, this year. Kenya and Rwanda signed last September—meaning that they are ready to face the consequences raised above.

A somehow similar state of affairs applies to the African Growth Opportunity Act (AGOA) which defines the mode of trade and commercial relationship between the United States and Africa, which expired in September 2015. Rwanda stood on its feet and refused importation of second hand clothes – famed mitumba—from the US and was struck off the AGOA beneficiaries by the Trump Administration.

But all said, there is one aspect that works against the East, Central and Southern Africa region. The region’s integration level is impacted by the presence of too many economic groupings. This limits the area’s negotiating strength in the international market. The region seems to suffer the other side of the European syndrome related to the Scramble for Africa and colonization legitimized by the Berlin Conference.

The region has five economic groupings suffering from multiple memberships, making it difficult for some individual member countries to participate in joint economic partnership agreements jointly because they already belong to another group.

The first group is the Southern Africa Customs Union (SACU). This region’s oldest bloc established in the 1889 groups Botswana, Lesotho, Namibia, South Africa and Eswatini (formerly Swaziland). They also have a common external tariff except Botswana operating in a common monetary (rand) area.

The second is the Southern Africa Development Community (SADC) made up of 15 countries but only half of them are involved in the EPA negotiations. Worse still some have observer status, making it doubtful on how far they can benefit from EPAs.

The bloc was built in 1992 on the ashes of the Southern African Development Coordination Conference (SADCC) originally established to reduce dependence on apartheid Southern Africa. To the members then, a customs union was a non-starter. SADC member states are Zimbabwe, Zambia, Botswana, Angola, Mozambique, Tanzania, Lesotho, Malawi, Eswatini, South Africa, DRC Congo, Namibia, Mauritius, Madagascar and the Seychelles.

What impacts the negotiation process of the region is that all countries belong to two economic blocs at the time when Africa needs to be realistic and consider participating in joint plurilateral initiatives and generally work together closely with other WTO member to unlock negotiations because a strengthened multilateral trading system is in the interest of the continent.

Symbolically, when the Europeans scrambled for Africa, they were in search of eggs to sustain their poultry businesses. In return, it would be an error for Africans to go to Europe for business negotiations as scrambled eggs. Africa must integrate internally and have one voice externally. That is the key.