After Fifth July 15 Anniversary what? 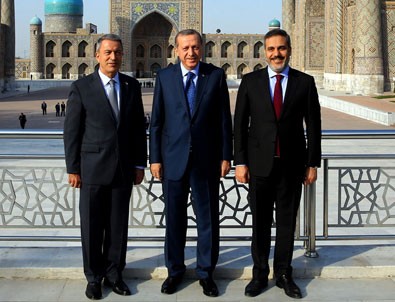 Along the lines of event planning and execution etiquette, one can say (in Queen’s English?) that dust has settled under the feet of the fifth anniversary of the multi-elevation and highly controversial global mystery of the July 15, 2016 Turkey ‘coup’. The question is: “After this anniversary what?”

Turkish President Recep Tayyip Erdogan called this Turkish and global episode a “Gift from God”. Which type of god? Could it be “The Giver of Life, The Merciful, The Benevolent?” Definitely not. It must be of his making. His type, which he and his inner circle know better.

Otherwise, ‘coup’ video clips depict “horror”. Eye witnesses give a “bloody” account. Military experts quip it was “rather amateurish, devoid of what it takes to constitute a coup”. Critical thinkers across the board conclude it was a planned-to-fail ‘coup’, self, incorrigible, faked…” because some official accounts contradict between event and time; while others report events that did not actually take place. They are fictitious. To those who   have been through the series of past Turkey coups, it was “strange, unusual”.

The saddest side of the event is the number of innocent people who died. Ostensibly, in their memory, a ‘martyrs’ monument’ has been erected! Official casualty figures differ by two people. Small in numbers, but big in essence because the Quran says killing one person is killing the whole humanity. And African indigenous knowledge has it: “Kiumbe mzito” – moral translation, “there is nothing light about human life”.

Without shame, this is the event the Turkish people and those of the rest of the world are called upon by those in power to remember in the name or from the perspective of democracy building (faith aside).

At societal and intellectual levels, a strategic July 15 Foundation has been put in place flanked by an equally strategic International July 15th Annual Symposium. Two days to this year’s anniversary, current Defense Minister Hulusi Akar, who was the country’s Chief of General Staff at the time of the ‘coup’, addressed the fifth series held at Marmara University.

Labouring to send across a message of the near-theatrical involvement of the army, he revealed that a total of 23,364 personnel had been expelled from the military since the failed ‘coup’ attempt. However, he did not explain the part these purged personnel played to qualify for the purge.

Two controversial elements evolve. The revelation about civilians being provided with arms by agents of the government, which turns round and casts the blame of the putsch on a Muslim cleric Fethullah Gulen, who had lived away from Turkey in U.S. self-exile for seventeen years before the tragedy. Where is the link?

Against this stark revelation, lawyers have filed a criminal complaint against seven people, including President Erdogan himself and son-in-law Berat Albayrak, over a mob boss claims about distribution of AK-47 weapons to civilians before and on the night of the ‘coup’. But where is room for a just justice delivery system in Turkey where the chief suspect (Erdogan and his government) double as the prosecutor and the judge?

Within the echoes of the 5th anniversary observation, fourteen New York State Senators, as members of Friends of Turkish People Legislators Association of New York, have urged the Joe Biden Administration to make the Erdogan government accountable for all misdeeds against the people of Turkey and the international law.

They peg their plea on the most recent kidnapping of the founder and president of an education foundation in Kyrgyzstan on the guise of having Gulen links. They take note of a confirmation by President Erdogan himself that   over the past five years, Turkish intelligence agents have abducted about 100 people from different parts of the world and taken them to Turkey, where the complainant is the investigator, prosecutor, judge and prison warden.

The ‘crime’ of these people is being followers of Gulen, who Turkey holds responsible for masterminding the ‘coup’. Are these people being held in lieu of Gulen? Gulen himself has said it categorically that he is ready to go to Turkey voluntarily to face trial if an independent inquiry finds him responsible. What fears does the Turkish government have about holding an independent probe? Could it be because it knows what the results would be?

The question that begs an answer is: “When shall the world know or be told the (true) story of the July 15, 2016 ‘coup’? The culprit is in charge of the media outlets. And in between, the Turkish people deemed dissidents by the regime, wherever they are, continue to undergo or are under threat of undergoing all sorts of repressions to unimaginable and human rights violation levels that don’t respect provisions of the national constitution or international law.

In Turkey, people have lost jobs on Erdogan’s decrees. People have been held in preventive detention, arrested, prosecuted, found “guilty” on false evidence and sent to jail where they face all sorts of repressions. Women have been strip searched. Alongside their mothers, children have lived in prisons where they have no bedding or food provisions.  All because of Gulen or perceived Gulen links.

Doesn’t it amount to a mockery when President Erdogan cries foul in the international arena about the mistreatment of the Palestinian children when he denies his own even the right to access special medical attention for terminal cases like cancer because their parents belong to Gulen’s Hizmet movement?

When will the July 15 story be told? Journalist Mehmet Tezkan, who is on record for having listed the funny things that happened during the night of the ‘coup’, has an opinion. He says: “We cannot solve the July 15 (equation) without Erdogan (first) leaving power.”

Another source suggests: “if Erdogan goes on staying his position, the 15 July coup cannot be solved… This is why they do not want to go.” Why? Because they hold the key to the cabinet of the coup files. The ‘coup’ is their baby.

There is a school of thought that compares Erdogan as the politician and Gulen as a scholar mistaken for somebody in search of political power. This reminds one of what Dr. Jon Pahl paints in his book titled: “Fethullah Gulen; A. Life of Hizmet; Why a Muslim Scholar in Pennsylvania Matters to the World”.

This historian scans Gulen’s life revolving on the axis of “integrity of participation in the nonviolent practices of Islam; principled pluralism – manifest in a commitment to dialogue; engaged empathy – deep feeling for the suffering of the world, and willingness to engage on behalf of alleviating that suffering; a commitment to spiritual and scientific literacy; and an organizational model of social enterprise”.

These are no-go areas for Erdogan, who is head over heels in love of and search for power and wealth at whatever cost. In trying to establish a modus vivendi equilibrium between the Erdogan and Gulen lives, one only ends up revisiting the past and quoting Socrates for the Gulen curve. Namely that: “I was too honest a man, to be a politician and live”.

All said, could Mehmet be right? That is the question.