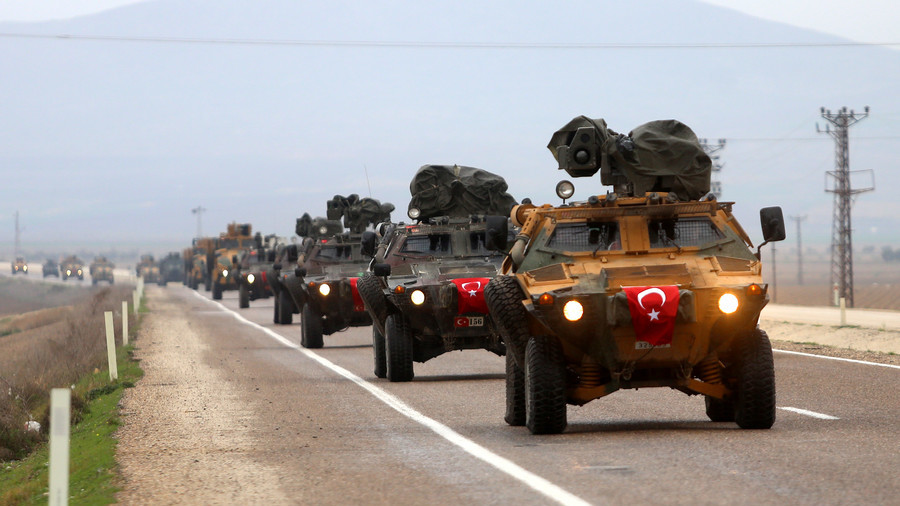 Salih Muslim, leader of the Syrian Democratic Union Party (PYD), paid formal visits in Istanbul on 25 July 2013 and in Ankara on 1 October 2014. The main topic of these visits was intelligence. Top-level political decision-makers of the state met with Salih Muslim. Ankara was trying to persuade Muslim to have PYD adopt a more clear stance against the forces of Bashar al-Assad and wanted to establish a communication line between PYD and FSO (Free Syrian Army), which is basically under the auspices and control of Turkey.

Meanwhile, PYD, which was fighting against ISIL (The Islamic State of Iraq and the Levant), had not wanted to collaborate with FSA and defended the idea that there was no difference between FSA and ISIL in terms of ideology and FSA was also a jihadist-Islamist group. On the other hand, Turkey was disturbed with the Kurdish presence throughout the Turkish-Syrian border in northern Syria and did not want an autonomous Kurdish region to be established. If they managed to establish an autonomous region called such as Syrian Kurds or Iraqi Kurds, Turkey would have been surrounded with a Kurdish line in the south.

A group of security elites in Ankara was afraid of the Kurdish regions inside Turkey to enter into the magnetic field of their cognates in more south by time and get influenced. If this had happened, their requests towards an autonomous region or even a demand for independence would have formed a stronger basis. Meanwhile, the Settlement Process in Turkey was ongoing while PKK was in an ace of laying down arms. Turkey had gained a chance to resolve the most important domestic problem, which has been wearing them down in domestic and foreign policies since the end of the 1980s, through democratic methods.

According to this, another group of security elites evaluated this situation rather in favor of Ankara with regards to Iraqi and Syrian Kurds as long as they are democratized domestically. The presence of Salih Muslim in Turkey and negotiating with the Turkish decision makers directly were very important matters in this respect. The then Prime Minister Ahmet Davutoglu and Deputy Prime Minister Yalcin Akdogan told Muslim to collaborate with FSA and keep a very clear distance from PYD. Muslim rejected both.

As a matter of fact, Muslim’s reasons for rejecting Turkey’s requests were quite comprehensible. First of all, PYD was fighting against an Islamist-jihadist fanatic terrorist group called ISIL. Jihadist transfers were being carried out between FSA and this group quite often. FSA was already unwilling to fight against ISIL because according to FSA; ISIL housed their jihadist brothers.

Furthermore, Moscow was blaming Ankara for doing oil trade with ISIL and also protecting them in December 2016. Russian Minister of Defence Anatoli Antonov stated that Erdogan and his family were personally coordinating the petrol trade with ISIL and Russia had evidence to prove this statement. YPG knew what kind of a collaboration Ankara had with ISIL; thus Muslim was hesitating to approach closer to Ankara. Moreover, Turkey was also supporting the Al-Nusra Front, which was a clear subcontractor organization of Al-Qaeda. The following statement of Muslim was very important which took place in Ankara on 1 October 2014: “They say something and do something else. ISIL is still using the Turkish border. Do they want to say “PYD did not meet our conditions, we are over ISIL?”

By stating this, he meant that the close relationship between Ankara and ISIL damaged the cogency of Ankara in the eyes of the Syrian Kurds. PYD to fall into Ankara’s remit was going to be a suicide under these circumstances. Because the Syrian Kurds did not imagine a radical Islamist Syria as ISIL and FSA wanted. They desired a secular and democratic future in Syria where the minority rights of the Kurds are constitutionally guaranteed. Salih Muslim saw that Turkey’s purposes in the field were (i) Islamic-Sunnist policies, (ii) not capable of isolating itself from Ankara’s anti-status-quo and irredentist approaches.

The fact that Ankara considers PYD and Salih Muslim as an opponent Syrian group and its leader is more important than the content of the negotiations. Yes, Ankara was not happy that PYD was not under their guidance. However, they did not characterize PYD as an extension of PKK and a terrorist group. The following statement of Salih Muslim on 27 July 2013 is very remarkable in this context: “The protocol was first class; Foreign Ministry and other high-ranking officers accepted us… Al-Nusra is fighting against us. Of course, we discussed this matter in Turkey… Turkey is a big country. We are friends of Turkey. We give weight to our relationships. Turkey has a big role in the Middle East. Moreover, Turkey shares a 900-kilometer border with Syria. That is why we must certainly have negotiations… It is very normal for Turkey to give importance to Syria because of all these reasons. We, the Kurds who live in Rojava densely, have never been far away from Turkey, we always have been close”. This was the relationship between Turkey and PYD until 2015.

Turkey had its back against the wall after the Kobani crisis broke out. After ISIL invaded Kobani, which was one of the most important residential areas in the Syrian Kurdish region, the US and Iraqi Kurdish region increased the pressure on Ankara. Ankara first resisted the plan that opened the way to logistics of soldiers through Turkey but they had to revise their attitude because of the increasing pressures.

Turkey opened Habur Border Gate on 30 October 2014 and the Iraqi Kurdistan troops (Peshmarga) entered Turkish soil with a 40-car convoy accompanied with heavy weapons and Kurdish flags. The troops, which were greeted with fireworks and “long live Kurdistan” chants and gained great attraction from the locals, reached Suruc after a 20-hour journey. The Peshmarga in this convoy met with the Peshmarga team which flew to Urfa in Mursitpinar Border Gate. Nechirvan Barzani stated that the government of the Kurdistan region would help Rojava. Barzani also added that the Iraqi Kurdistan government, Turkey, and PYD were working in accord with the coordination provided by the US. Sefin Diyazi, the spokesperson of the Iraqi regional Kurdistan government, stated that the coalition forces of Turkey and the US played a determinant role in Kobani.

Turkey, let aside describing the Syrian Kurds (YPG) as terrorists, took an active role in order to help the Syrian Kurds defend themselves in Northern Syria and opened its borders to the Iraqi Kurdistan forces, and led the drive for the delivery of the US armaments to PYD. These were not done in secrecy but with the approval of the AKP (Justice and Development Party) government in Ankara.

There was a bombing incident in Suruc in Urfa on 20 July 2015. 33 citizens lost their lives. 104 were injured. Ankara claimed that Kobani (YPG region) was responsible for the bombing. Two police were targeted by silenced weapons on 22 July 2015 in Ceylanpinar in Urfa and they were killed. The government declared PKK as the perpetrators but PKK rejected it. 30 citizens were killed and 60 injured in Ankara on 17 February 2016 in a terrorist attack.

The government claimed that PYD was responsible for the attack. However, PYD rejected this statement. Prime Minister Ahmet Davutoglu blamed NATO and the US and related the armaments delivery to this terrorist attack. President Tayyip Erdogan stated that he did not understand why Washington did not recognize YPG as a terrorist organization. After these incidents; (i) domestically, the Settlement Process held with the Kurds was terminated, (ii) outside, the Syrian Kurds were declared terrorists and the Syrian policies had a serious change.

What really happened? Why was the policy, which was coordinated with the US and Coalition in Syria, abandoned and Turkey developed an “anti-Kurdish” perception only to start a new mission in order to guarantee security outside? This is very important due to the fact that shifting towards Russia’s orbit and listing NATO-US and PYD as enemies happened in such a short period of time during this process. Which domestic dynamics played a role in this decision?

Correspondingly, why were the Settlement Process and Kurdish initiative, which were long haul political projects and planned to be completed through democratic methods, put aside? Which domestic dynamics persuaded Erdogan to take these decisions? If he took these decisions by taking initiative, why did he regard them as necessary? Did his desire to receive support from MHP (Nationalist Movement Party) play a role in this matter? However, AKP, which had received close to 50% of the votes and experienced the best election results, did not need the support of MHP! Besides, the process of Kurdish initiative was very close to becoming a success.

What kind of a role did 17/25 December; Yalcin Akgodan’s “conspiracy to national army” outbreak; release of the defendants of the Ergenekon and Balyoz cases right off the bat; radical purge process in TSK (Turkish Armed Forces) after the 15 July attempt; changing domestic and foreign Kurdish policies play? Where the Syrian Kurds and Settlement Process made a matter of negotiation? What happened in order to list the US as an enemy and approach the orbit of Russia towards the Syrian policy, which was being directed on the axis of the US-Coalition powers? What happened in order for Turkey, which had approved and allowed the use of its soil for the arming of PYD and Kurdish control over Kobani, to act like these policies had never happened through this two-year time?

Without a doubt, the political decision-makers may always revise their decisions in favor of the countries they govern. However, these revisions could always be explained with the changes in domestic and foreign policies. Although the approaches like “I just felt like it and I did it” are capable of generating desired perceptions when introduced to the public opinion, the research of the reasons behind them is always essential especially for academic purposes. The incidents I have mentioned are extremely important political variables which have long term consequences. Understanding why these variables happened in the recent period is an important factor towards understanding the dynamics of the regime today. I will keep analyzing and bringing this matter forward.

Turkish version of this article appeared at TR724.com