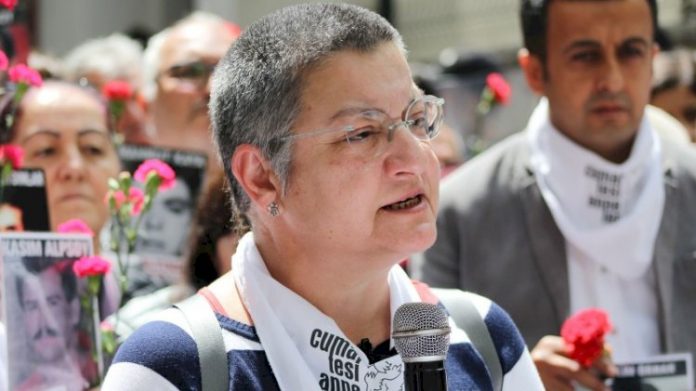 Turkish Police arrested Sebnem Korur Fincanci on charges of spreading propaganda of PKK (The Kurdistan Workers’ Party or PKK is a Kurdish militant political organization and armed guerrilla movement). She called for an international investigation following allegations that Turkish Military carried out chemical attacks on PKK members in Northern IRAQ. Turkey and PKK have been fighting over 40 years caused thousands of deaths from both sides.

Fincanci is a Turkish medic, a retired Professor and current president of the Turkish Medical Association (TBB) is and internationally-recognized forensic expert. Besides her professional, she is also a human rights activist, a voice for oppressed people in Turkey. Fincanci is facing terrorism charges imposed by Turkish government.

According Turkish media, the investigation of the 63 years old doctor was based on “spreading propaganda of a terrorist organization and insulting the Turkish nation, the republic of Turkey and its Institutions”  On these charges, her house in Istanbul raided by Turkish police, and was taken to the Ankara for further questions on Wednesday, in following day, the Criminal Supreme Court Justice of Peace ordered Fincanci in detention after a three-hour questioning.

According to the International Federation of Human rights The reason for Ms. Korur Fincanci’s detention is that on October 19, 2022, while acting as President of the Turkish Medical Association, she gave a public statement concerning allegations that Turkey employed chemical weapons in the Kurdistan regional federation of Iraq on the members of the PKK. On October 25, 2022, after the cabinet meeting, President Recep Tayyip Erdogan spoke to the media in reaction and response to Dr. Sebnem’s statement.

In order to stop the Turkish Medical Association, and in particular Sebnem Korur Fincanci, from bringing up legal action, Erdogan vowed that the Turkish government will take all necessary measures. Since he took office, President Recep Tayyip Erdogan has attacked Ms. Fincanci in particular for her political view and stance for several times.

She made the comments on pro-Kurdish media. The PKK released a video last week exposing Turkish forces using a chemical weapon to attack a man and female fighter in a cave. 17 PKK members were identified as having recently perished in northern Iraq by chemical weapons as claimed by the PKK.

Turkey denies using chemical weapons against the PKK even though the EU and the US recognize it as a terrorist group.

Ms. Fincanci who had seen the video told Medya Haber TV that she believed that a chemical substance that damage the nervous system had been utilized during the attack.  She offered that a serious investigation was required to look into this case, and Selahattin Demirtas, the jailed head of Turkey’s pro-Kurdish HDP party, shared her opinion.

Fincanci said “I looked through the footage. Obviously, the use of poisonous gases that directly impacted the neurological system had occurred, “She had informed Medya Haber that the claims demands an international inquiry.

Turkey rejects the claims. “The Turkish armed personnel did not use any unlawful munitions” according to Turkish authorities.

Ms. Fincanci received criticism from Recep Tayyip Erdogan’s advisers for stating the very same assertion. President Recep Tayyip Erdogan said that the chairman of the Turkish Medical Association speaking ‘PKK language’, as well as vowed to take measures against both of them. Erdogan said “We are persistently devoted to eliminating professional groups who are affiliated with terrorist organizations in order to draw attention to their main goals”

Meanwhile, Turkish Police detained 11 journalists on Tuesday after conducting raids in different Turkish cities on the grounds that they may have ties with PKK.

Dr. Fincanci referred an independent international organization must be assigned for such allegations.

“I emphasized that if there was a fatality, a medical inquiry must be conducted in accordance with the Minnesota Protocol, and that the investigation must be conducted by independent institutions, since this is considered a war crime under the Geneva Convention. However, the news coverage implied that I had proved this occurrence, therefore it was not represented clearly.”

According to her statement, the Minnesota Protocol for Forensics was created as a technical guideline to aid those conducting investigations into suspicious deaths. Because of the crucial role the Minnesota Lawyers International Human Rights Committee had in its formation, the Manual came to be known as the Minnesota Protocol. The name “Protocol” is used since it refers to the document’s forensic medical component rather than its legal character. An international group of experts assembled by the UN Special Rapporteur on extrajudicial, arbitrary, or unjustified killings and the Office of the United Nations High Commissioner for Human Rights adopted the enhanced version of the Minnesota Protocol in 2016 following a two-year assessment process (OHCHR). The OHCHR released the updated version in 2017.