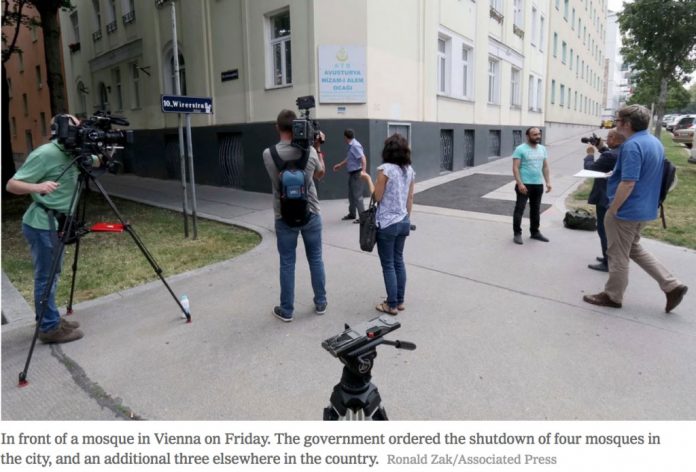 BERLIN — Chancellor Sebastian Kurz of Austria ordered on Friday the closing of seven mosques and the scrutiny of the right of dozens of Turkish imams to remain in the country, citing suspected violations of an Austrian law that bans “political Islam” or foreign financing of Muslim institutions.

The government’s move comes as Turks living in Austria and in other countries began casting absentee ballots for the June 24 presidential election. Mr. Kurz, who governs in a coalition with the far-right Freedom Party, campaigned last year on plan to crack down on illegal immigration and radical Islam.

“Parallel societies, politicized Islam or radical tendencies have no place in our country,” Mr. Kurz said at a news conference announcing the measures in Vienna on Friday.

Roughly 600,000 Muslims, most of them Turks or of Turkish descent, live in Austria, a country of 8.8 million.

Since taking office last year, Mr. Kurz’s government has began investigating Muslim organizations suspected of violating the country’s 2015 Islam law. The law aims to prevent any conflict between “thinking of oneself as a pious Muslim and proud Austrian citizen at the same time,” by regulating operations of the Islamic community.

Announcing the first legal consequences of the inquiry on Friday, Mr. Kurz said that the Arabian Cultural and Religious Community would be shut down on suspicion of promoting radical Islam, and that six of the mosques it operates were ordered to cease operations. Three of the mosques are in Vienna, two in the northwest of the country, and one in the south.

A seventh mosque, also in Vienna, that is run by a far-right group known as the Gray Wolves was considered illegal even by the country’s main Islamic organization.

Under the Islam law, Muslim religious organizations are banned from receiving the bulk of their financing from sources outside Austria. But many imams working in those organizations do so through the Turkish-Islamic Union for Cultural and Social Cooperation, known by the initials ATIB, and are civil servants of the Turkish government.

Speaking at the news conference, Interior Minister Herbert Kickl said the authorities were reviewing the residence permits of about 40 imams employed by ATIB, and their family members, over concerns they were being paid from abroad. He added that the permits of two others had already been revoked and that Austria had decided not to grant initial visas to five more.

Yasar Ersoy, a spokesman for the organization, told the public broadcaster ORF that the religious leaders were paid by Diyanet, the Directorate of Religious Affairs, which is based in the Turkish capital, Ankara.

The mosques and the imams have the right to challenge the order, the government said.

The Turkish organization has come under criticism from both Austrian officials and the public, after images surfaced in the Austrian media of boys dressed in camouflage uniforms re-enacting the Battle of Gallipoli as Turkish soldiers at one of the 60 mosques run by ATIB.

German news outlets found pictures indicating that similar re-enactments were being carried out in Germany, adding fuel to complaints against the sister branch of the organization based in Germany. Last year, several imams in mosques run by the organization were investigated over accusations that they were spying on critics of the Turkish government living in Germany.

The article by Melissa Eddy appeared at The New York Times on June 8, 2018. https://www.nytimes.com/2018/06/08/world/europe/austria-islam-mosques-turkey.html