Behind the new Turkish legal year 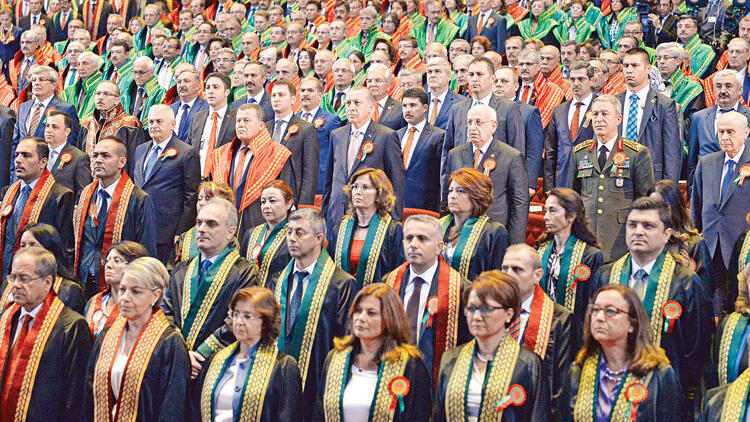 Every time I find myself in bad-to-taste circumstances skirting around the noble concept and delivery of justice, three chronologically acquired experiences sprout in my mind.

This time round, it was about members of Turkish bar associations reported set for boycotting a ceremony marking the start of Turkey’s (their?) legal year scheduled for September 2.

Why? To whom does the day belong? Could that read like a book whose title frowned at a program of the United Nations Food and Agriculture Organization (FAO) to establish forest plantations? Titled Whose Forests? the book was not opposed to the idea. Why not contribute to the Green Revolution? But, first, it pointed out the importance of the target group knowing to whom the trees would belong.  It was the question of ownership, which is not restricted to forests but democracy as well.

Back to Turkey, first I recalled the easily-sprouting, all-weather plant used since my ancestral days to set banana and coffee plantations ownership boundaries back home in the heart of Africa.“Olulamura” – the judge plant—is its name until today. Among some tribes around Africa’s peak Mountain, the Kilimanjaro, it is the magic peace broker. Placing its cutting between two neighbors at loggerheads is enough to create the miracle.

Second, I remembered my old school days of learning Latin grammar. We used to conjugate verbs including “judicare” — to judge– in all their possible forms. Latin has no ambiguity with tenses. We very much liked the essence of their gerundive form – this time “judicandum”– meaning (what) ought to be judged. The reason was that in all such forms, the mode (modus) stood implied and non-negotiable.

Romans are no more. But their language has weathered the time. Until today, there is no conceptual replacement for norms like modus Vivendi—the way, accepted mode of conducting one’s life in society. In executing contractual obligations, we have no better engagement phrase than modus operandi. Short of that something goes critically missing. And the law practice leads in falling back on Latin phrases for want of accuracy.

The above aspect and its predecessor African indigenous knowledge flag in the third, and possibly the most pertinent one. That is: Where does the 21st century citizens of science and technology, dwelling very much on cause and effect and, claiming going beyond to address (good) governance issues, stand?

In the proper running of any country, democracy is the contemporary determining factor. Without having to go neither back to the times of Greek myths and legends nor even into the etymology of democracy, the separation of powers remains the icon. In practice, it must happen and made to be seen that the Government, the Judiciary and the Legislature really work as independent pillars. This also implies that the Constitution, as the mother law, is not taken for cookies.

Furthermore, because the democracy litmus test is about how it all feels like on the ground, the Media derives its strength in the citizen’s freedom of expression component to be accorded the Fourth Estate status. Muzzling it creates a blob on any country’s independent path.

One can explain why Turkish bar associations are being reported as, for the first time, boycotting a planned Supreme Court annual ceremony at President Recep Tayyip Erdogan’s palace. They charge that it undermines the separation of powers.

According to a statement made by the Istanbul Bar Association, which claims a strength of about 45,000 members based in Turkey’s major commercial city of Istanbul and the capital, Ankara, the choice of venue signals “the rejection of all teachings on democracy, law and justice.”

Reports from Turkey quote the head of the Istanbul association, Mehmet Durakoglu, as charging that “the separation of powers has been destroyed,” and “this choice of venue by the Supreme Court displays where they stand on the issue.” He went on to charge that if President Erdogan and the Supreme Court don’t get the message, “other protests may follow.”

On the heels of this statement, the Anadolu News Agency reported the Supreme Court as denouncing it and as saying the lawyers were out of line and that the boycott “won’t evoke any response” from the broader public.

The opinion of the Supreme Court should not be under rated. For, not all lawyers stand for the boycott. And their stand deserves respect. The Union of Turkish Bar Association said it would not only attend the ceremony, come September 2; but its leader, Metin Feyzioglu, will also actually make a speech to adorn the occasion.

It is from this point of view that groups of professionals in Turkey, including lawyers, could pick a leaf from the modus Vivendi in a traditional African polygamous family setting. Under such an arrangement, it is generally advised that “if you come across a stick with which your co-wife is caned, the best treatment you can give to it is to throw it away.”  You deny your common husband easy access. Why? You have no immunity to being flogged with it!

On this premise alone, could the Supreme Court and the Union of Turkish Bar Association have failed this African indigenous test? Just off target, how much sense does a new academic year celebration make for teachers or students for that matter, when some schools are closed, teachers sacked or being held for questioning, and some text books have been destroyed for no apparent content errors?

Then on target, what is there for the Judiciary to celebrate when members across the ranks of their fraternity are languishing in jail or have lost jobs?  Not unless, some of those celebrating harbor some long rage tactics of abandoning the ship upon arrival of the right (ripe) time. That is, when the salt currently preserving the Turkish political situation will go bad.

In the Holy Bible’s book of the New Testament, Jesus Christ calls his disciples the salt of the world but also goes on to caution them against going bad. For, there is nothing that can be done to reverse the situation other than being thrown away. God forbid.

In our part of the world, there are several traditional axioms which the Turkish people and their leaders can tap on as they go about building democracy. These include, the ear that will go deaf doesn’t respond to medication. The wild animal that will die does not hear hunters’ horning messages. The twig that will splash feces on you is the one you bend and suppress with your foot while helping yourself in the bush.

By any dimension, this is the message any country aspiring to occupy a seat, prominence let alone, on the world democracy map, must appreciate. But how far are all these observations relevant to President Erdogan’s government and the ruling Justice and Development Party (AKP)? That is the point.

A dash into the history of the ceremony in question which was held at the President’s Place after the 2016 coup, reveals this could not be repeated in the following year due to criticism. Last year, it went back to the palace, where it is scheduled to take place again early next month, again amid protests. Is somebody, somewhere turning a deaf ear to this? What is so necessary about the palace venue?

All is not well with the popularity of the present government and its party. Even allies are not very comfortable. Local government elections stand testimony to this. Turkey’s biggest city, Istanbul, went to the opposition in a strategically forced poll re-run. What does this signify?

On the foreign front, the European Union is on record for having taken Ankara to task for what it expressed as pressurizing the judges and prosecutors. In this circumstance, how much strength remains on Turkey’s negotiation tools for the EU membership?

Slowly, the common Turkish people are getting a true picture of what is taking place at home. This is reflected through the ballot box. They know the problem is not exotic. It is within. But they need the support of professionals in their capacity as individuals and members of respective associations.

It will take time. But it is possible. The theorem is no return from democracy and the application dialogue.