Beyond the Taksim Square political chess 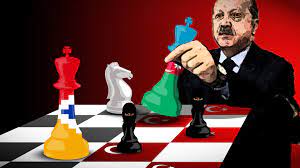 In the English language, when things don’t match, the Anglo-Saxon sons and daughters talk of “a square peg in a round hole”. This is the impression I got after watching clips about what was going on at the Taksim Square in Istanbul, Turkey, during this year’s May Day celebrations. What went wrong? What game is being played in Turkey politics? Could it be political chess?  If it is, who will be Anatoly Karpov? Who will be Garry Kimovick Kasparov?

“We are resisting with the spirit of the Bogazici University”, a young woman was quoted in the media as telling the police in the process of being detained by them. The Contemporary Lawyers Association (CHD) put the figure of people held in the incident at around 230. The figure is not small; particularly considering that even the orchestrated July 15, 2016 failed coup claimed 150 lives.

“We will not provide opportunity to those looking to exploit the sacred sweat of labourers in our country,” President Recep Tayyip Erdogan was quoted as having reacted during an Iftar fast-breaking dinner.

A zoom in reveals ideologically divided politics in contemporary Turkey. Protests that emerged from the Bogazici University show every sign of spreading throughout the country like bushfires of the savannah. The students took the angle of opposing political interference in academic activities after President Erdogan appointed an ally to head the University. It looks like everybody in society is protesting in their own way.

Istanbul Deputy for the opposition Republican People’s Party (CHP) Aykut Erdogdu has charged that Turkey’s national interests have been sacrificed for   President Erdogan’s “dubious wealth”. “I will work with all my power to take you down in elections and put you on trial…and I will be in the court room on the day of your trial so your right to defense is not hindered,” he sent a message to the president.

He alleged that he is under surveillance due to his criticism of Erdogan while his close female friends were being harassed by reporters from ATV and Sabah groups, which are owned by an Erdogan ally. He termed this political blackmail. The Deputy further charged that Erdogan “founded a monstrous order that victimizes millions of people and has no semblance of a conscience. He proclaimed: “My reaction isn’t momentary or hotheaded. The knife has hit the bone.”

In further testimony of the political chess game in Turkish politics, prosecutors have launched an investigation into Istanbul Mayor, Ekrem Imamoglu, over his “disrespectful” behaviour last year during a visit to a shrine housing a tomb of an Ottoman sultan during a ceremony marking Istanbul conquest from the Byzantine Emperor in 1453. Imamoglu was pictured with his hands folded behind his back. Interior ministry said the crux of the matter was that the Mayor was disrespectful to the tomb of Fatih the Conqueror

Also separate claims that Imamoglu had visited co-chairs of the pro-Kurdish opposition People’s Democratic Party (HDP) and that he is also opposed to Erdogan’s project of finding an alternative to Bosphorus Strait are being investigated.

This alternative channel has already brought the Erdogan regime face to face with 103 retired navy admirals, who wrote, signed and published a declaration denouncing the ruling AKP for “opening up for discussion the Montreux Convention” and for Islamizing the army over an active-service rear admiral’s visit to a leader of an extreme religious sect. Signed in 1936, the Montreux Convention gives free passage to civilian ships during peace times and restricts the passage to naval ships not belonging to the Black Sea states.

President Erdogan hit back criticizing the declaration by calling it “a midnight action that definitely has ulterior motives per its tone, method, and the discussions it would clearly lead to.” Erdogan called the ex-admirals’ action a “political coup” in consonance with “midnight action”. Events that followed this incident; like holding some admirals and taking statements from them, leave the door for further polarization of Turkey wide open.

Besides what the young woman had to tell the police as they detained her, the Istanbul court in March, this year, held the first trial of 46 members of the Saturday Mothers comprising families of victims of state-enforced disappearances who have been gathering every Saturday in the commercial capital since 1995. Prosecutors said “the protest posed a threat to national security, public order and public norms.”

How does one link these? There must be something more than what meets the eye or hits the ear drum. Turkey has already withdrawn from the international convention originally trading in the name of the country’s commercial capital Istanbul, targeting the protection of women’s rights.

The European Commission President Ursula von der Leyen, after a top-level EU meeting with Turkish President Erdogan on the subject, told reporters in Ankara: “…This is about protecting women and protecting children against violence. And this is clearly the wrong signal …” In Turkey today, women are subject to dehumanizing state treatment like strip searches in prisons!

Under such circumstances, President Erdogan and the ruling AKP party have every reason to feel uncomfortable about the forthcoming 2023 parliamentary and presidential elections. According to Pollster Avrasya the AKP is at all time low, polling 30-32 per cent. Over the period of about two decades they have been in power, Erdogan and his fellow party leaders have sort of slowly dug their own grave due to over self-confidence and or change in power taste.

When AKP came to power in 2002 it vowed to voters and promised to eradicate what is recorded as “3Ys”. These are, in Turkish, Yolsuziuk (corruption), Yoksulluk (Poverty) and, Yasakkar (prohibition). In the 2010 referendum seeking to amend 20 points of the Constitution targeting strengthening the democratization path, profiling by the state was among the practices to be revoked.

But what is has been taking place until today? There is evidence of people having been arrested within hours of the July 15, 2016 failed coup. How could their identities be established without the practice of profiling? Of late, we have learnt that students from kindergarten to 12th Grade are being blacklisted on Gulen links.

Grand corruption has openly plagued Turkey since the 2013 revelations. I don’t know what the average Turkish citizen would say about the state of his or her poverty status today as compared to the past. Profiling by the state is the norm of the day. The economy —in respect of the finance ministry and trade; the central bank, foreign reserves and strength of lira local currency– is reeling on its knees.

The state is such that the AKP and Erdogan have turned to the Islamist opposition Felicity Party with which it shares root in the Islamist Welfare Party which was banned in 1998 by the Constitutional Court. Many of the founders of AKP originated from this party. This shows the extent to which AKP has lost popularity that it has to go that low in search of possible support for the 2023 polls.

Turkish politics towards 2023 is more of a chess game. If the saying that he who wins Istanbul wins Turkey holds water, the last poll re-run has an interim verdict for AKP. And the path to the event cannot but be rough for the opposition in terms of risking de-registration while their leaders face investigations and possible court proceedings under lame laws and an already compromised justice delivery system.

Although Turkey has no escape tangent out of the democracy path, all the lanes have been land mined and are in need of special field scan operations for peaceful 2023 polls. The question is: “Who will do the scanning and removal?” AKP and Erdogan have every reason for panicking. They are like an injured trapped leopard, ready to claw anybody in sight on site in desperation.