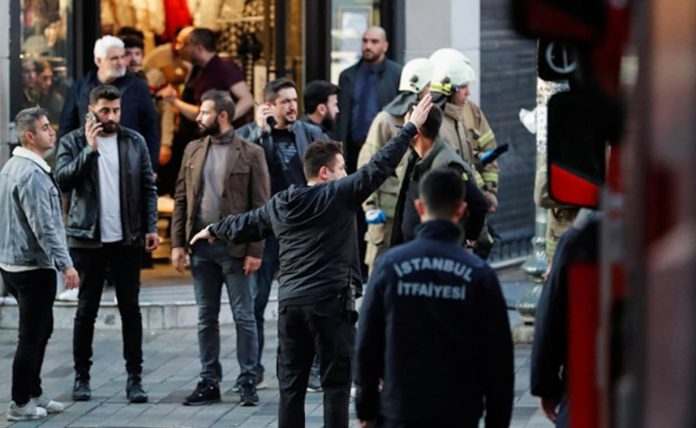 At least six people were killed, and 81 others wounded on Sunday, November 13, in a blast that rocked Istiklal Avenue in Istanbul, Turkey. However, the Health Minister Fahrettin Koca posted a tweet confirming that 39 out of them have been discharged from the hospital, and of the remaining 42, five are in the intensive care unit, and two in critical condition.

According to Turkish President Tayyip Erdogan, the incident “smells like terrorism”. In an earlier interview with reporters before departing the G20 summit in Bali, President Recep Tayyip Erdogan promised that the perpetrators of this vile act would be found and face legal consequences.

Istanbul’s chief prosecutor’s office has revealed that they have appointed five public prosecutors and launched an investigation.

The suspect is said to be a woman seen sitting at the explosion site for over 40 minutes. According to Justice Minister Bekir Bozdag, this revelation leaves the possibility that either the bag she left had a mechanism that enabled it to explode independently, or someone detonated it from a distance.

Till now, nobody has claimed responsibility for the attack. The city and other towns have been targeted previously by Islamist militant’s other terrorist organizations, such as the multiple blasts that occurred in 2015 and 2016 pre-elections.

Soylu said “It is PKK/PYD terrorist organization according to our preliminary findings” “A little while ago the person who left the bomb (was) taken under custody by teams of Istanbul Police Department. Before their arrest 21 more people were also taken under custody,” the minister said. “The face of terrorism is painful, but we will do our best and continue to struggle to the end, whatever it takes”

Pre-election Blasts are common in Turkey

Following the attack, social media seems divided between opposers and supporters of Erdogan’s rulership. The Pro-Erdogan claim and speculate that the attack aimed to impede turkey’s geopolitical leadership and chiefly Erdogan before the oncoming polls. They contend that a “dark hand” is striving to pull such strings, but it remains unclear on those behind the attack.

However, it is common in the country to find scapegoats to avert responsibility.

Another group lamented the slow internet and questioned why the assailant was not apprehended before carrying out the attack. Pro-Erdogan state officials tweeted and emphasized that Turkey is strong and diverted it from its direction. For instance, Erdogan’s spokesperson Ibrahim Kalin made a Turkish tweet, “No attack will break Turkey’s resistance and determination,” which received mixed reactions from the followers.

Turkish citizens’ rejoinders are shifting from emotional to discerning the truth. I conversed with some Istanbul residents who are displeased with Erdogan’s leadership. I use Z.Y. as their initials for security reasons. Z.Y. (29) emphasized, “It was very typical and expected of him to see such a blast.”

Before every general and indeterminate poll, we become accustomed to such explosions. C.E. (40) questioned why Erdogan had to leave the country amid such a catastrophe that had hit our nation, stressing that he only cares about his popularity and would even use the attack to amass political gain during the G20 summit. R.A. (35) said, “Stepping into the streets scares me because everything seems quite blur.”

The Istanbul Criminal Court of Peace issued a broadcast ban for all audio and visual news and social networking sites linked to the explosion. There are concerns that the current bandwidth limit and internet ban are a shadow of what will occur during the electioneering period.

The attackers Identity revealed with questions.

Meanwhile, police finally identified the attacker as Ahlam Albashir, a Syrian woman who has been in the country illegally for over a year. According to Turkish police, the suspect confessed to being a Kurdish militants’ PKK/PYD/YPG trainee and intended to escape to Greece.

According to the police, they searched at least 1,200 surveillance cameras to trace the suspect’s movement successfully. In the process, they apprehended 46 persons.

Minister of Internal Affairs rejected the Message from the USA

Nations and diplomats around the world sent their condolences and condemned the attack. For example, the United States, through White House Press Secretary Karine Jean-Pierre, stated, “We strongly condemns the act of violence that took place today in Istanbul. Our thoughts are with those who were injured and our deepest condolences go to those who lost loved ones.”

However, Turkey’s Interior Minister, Suleyman Soylu, publicly rejected the United States’ condolence message. He stated, “I once again say that we don’t accept and reject the USA embassy condolence message. Our alliance with a country whose Senate sends funds to this mentality that provides funds for Kobani and other terror areas in which aims to disrupt the peace in Turkey must be questioned.”

Erdogan and Soylu disagreed over the Condolences

On the contrary of Soylu rejection condolences from the United States, President Erdogan twitted “my heartfelt gratitude” to all countries compiled their flags who sent their condolences including the United States in 3rd place in 1st row after Azerbaijan, Cyprus. Social media users read this duality and disagreement as a political ground fight between Soylu and Erdogan. Meanwhile, Erdogan and Biden held a sideline meeting at Bali, Indonesia where both are attending G20 summit.

Others who sent their condolences include:

PKK and YPG rejected the accusations and Offered Solidarity and condolences

In a press statement, Turkey’s Interior Minister, Suleyman Soylu, accused the PKK/PYD terrorist organization based on their preliminary findings.”

However, he did not divulge or elaborate on the investigation details that led to their conclusions.

Following extensive interrogations hours later, the Syrian suspect is said to have confessed that she served as the PKK/PYD/YPG terrorist’s special intelligence officer and had entered the country to execute the attack.

Meanwhile, The People’s Defence Forces have denied involvement in the Sunday attack.

Meanwhile, The People’s Defence Forces (HPG), through Agency News Firat (ANF), have denied involvement in Sunday’s explosion. According to the ANF, the group offered condolences to the victims’ relatives and wished the injured a quick recovery.

Moreover, Mazloum Abdi, the General Commander of the Syrian Democratic Forces (SDF) and a spokesperson for the armed Kurdish People’s Protection Units (YPG), also denied involvement in the terror attack and offered solidarity with Turkey.