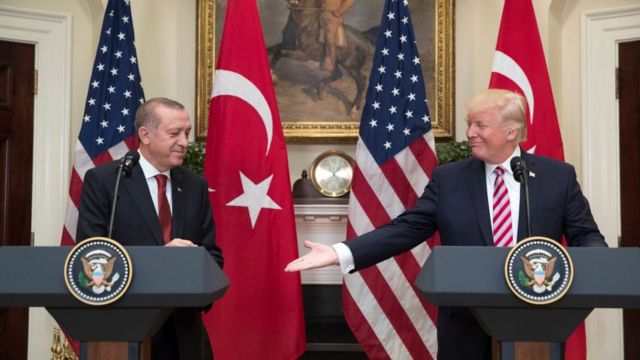 Do a Biden presidency and the subsequent loss of Erdogan’s valuable ally mean the time has come for accounts to be settled with Erdogan?

Turkish leader Recep Tayyip Erdogan’s close relationship with former U.S President Donald Trump has led to political interference and personal favours from Trump in efforts to conceal a money laundering case involving Turkey’s state-run Halk Bank in New York.  The question now arises, how will Erdogan avoid an expose of the scandal under the Biden administration.  The newly elected U.S government seems especially determined to strengthen democracy and uphold the rule of law and this means a government unlikely to tolerate corruption. The Halkbank corruption case, Russia’s S-400 missile, The Kurdish issue in Turkey, Iraq and Syria, and the extradition of Turkish cleric Fethullah Gulen are all likely to arise as foreign policy agendas between the two countries.

The many media reports indicate that the Erdogan government’s top-level lobby efforts did not prioritize the extradition of Gulen but were rather aimed at convincing the Trump administration to resolve the issue of Halkbank.  The corruption case against Halkbank first began in Turkey when Turkish police officers launched an investigation, investigating Erdogan’s inner circle for engaging in suspected corruption, bribery and tender-rigging in December of 2013. Halkbank CEO Suleyman Aslan and Iranian-Turkish Businessman Reza Zarrab were among the detainees for their involvement in money laundering and illegal gold exportation with Iran.  Zarrab only served 70 days behind bars before being released by  Turkish courts.

Erdogan condemned the investigation as a politically motivated attack on his government and blamed the Gulen Movement.   Through the use of his political power the Turkish Prosecutors were compelled to drop the charges and ultimately all involved in the investigation including the prosecutors, judges and police were removed from their posts.

Since the Southern District of New York U.S. Attorney’s Office filed a criminal indictment charging Reza Zerrab and two others in March 2016 for conspiring to evade U.S sanctions against Iran, the Halkbank case increased tensions in relations between Washington and Ankara. Surprisingly Zerrab fled to the USA with his family and was arrested upon his arrival at the Miami National Airport by FBI on March 2016. Zerrab became a key witness as he pleaded guilty and agreed to collaborate with the US Department of Justice. Zerrab testified before a court claiming that Turkish leader Erdogan was personally involved in the scandal and had encouraged  Halkbank to help Iran in evading   U.S sanctions. Halkbank executive Hakan Atilla who was arrested at the John. F. Kennedy International Airport on 29th March 2017 was sentenced to 32 months in prison by the U.S. court.

The U.S. media reported that Trump assigned Attorney General William Barr to assist in attempts to stop any further enforcement actions against the bank and its associates. Former Secretary of State Rex Tillerson who was later fired by the Trump administration criticised Trump’s involvement and interference in the case. Trump’s former National security advisor John Bolton called Trump’s help to Erdogan an “obstruction of justice.” Bolton mentioned in his recently launched book titled ‘The Room Where It Happened: A White House Memoir’, that Trump’s personal or financial interests in Turkey influenced the President’s position with Erdogan as Trump owns Trump Tower Istanbul. The Turkish government also paid huge amounts to Trump’s former national security adviser, retired Lt. Gen. Michael Flynn to kidnap Gulen. Flynn was eventually charged as a foreign agent of the government of Turkey in the first week of March 2017.

Trump repeatedly assured Erdogan that the case would be closed but didn’t succeed in influencing the U.S Justice system. Erdogan raised the Halkbank issue with the then Deputy President Joe Biden during a one-day visit to the U.S in August 2016. Biden’s aide told The Times that the Turkish President pulled Mr Biden aside under a tree for a private conversation wherein he claimed that the case was a “big conspiracy” instigated by his rival Fethullah Gulen. While Erdogan reportedly demanded the release of Zarrab and the firing of Preet Bharara in his private meeting with Vice President Biden on Sept. 21, Erdoğan’s wife is reported to have also discussed the case with Jill Biden.

Erdogan also reportedly tried to convince the then-President Barack Obama to drop the Halkbank case in his penultimate phone call to the outgoing President in December 2016 and again during his final call in January 2017.

Turkey’s purchase of Russian-made advance S-400 missile defence systems in 2019 upset relations between Ankara and Washington. Although Trump resisted pressure from Congress’ to impose sanction on Turkey as Ankara violated U.S. sanctions law, the Biden administration seems to take a firmer stance against Ankara. “The idea that a strategic — so-called strategic — partner of ours would actually be in line with one of our biggest strategic competitors in Russia is not acceptable,” Biden’s incoming Secretary of State Antony Blinken stated expressing his disappointment with Turkey in Washington on January 19. The other concern for Ankara is Brett McGurk who was appointed as the US Middle East policy chief by Biden. McGurk helped Kurds in Syria against ISIS.

It appears that Biden will not indulge Erdogan as Trump did, but instead will allow the U.S. judiciary to investigate Turkish state-run Halkbank’s role in violating US sanctions on Iran in the case set to resume on March 1st. Possible sanctions may result in major economic challenges for Turkey as it remains to be seen what a Biden win means for Erdogan and Turkey.