Can Voters Bring Down Turkey’s Erdogan? 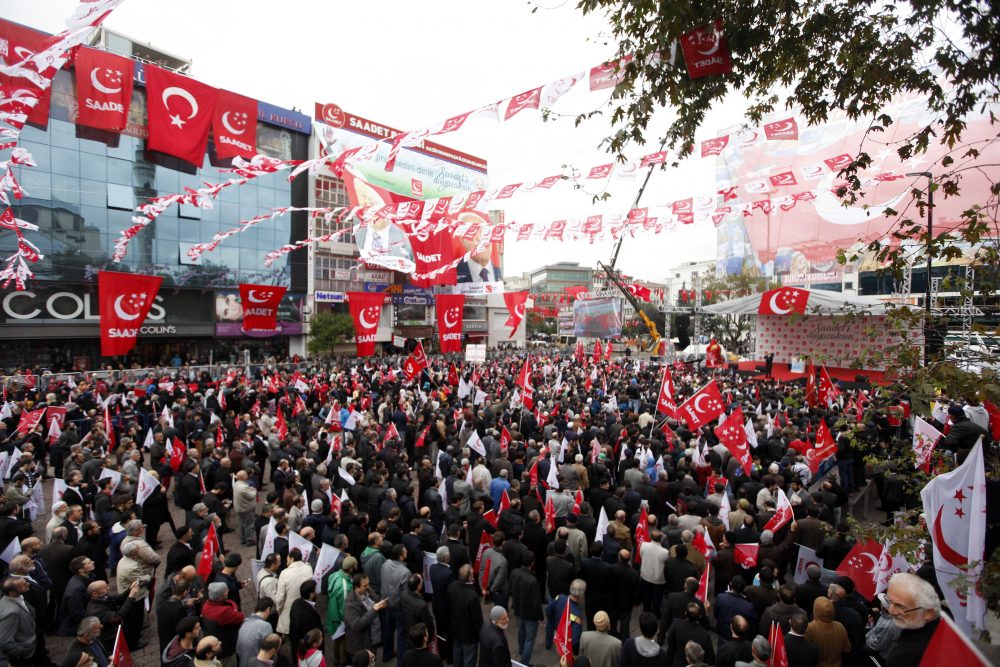 Muharrem Ince was having a good week. The boisterous, silver-haired Ince is the main opposition candidate running against Turkey’s longtime leader Recep Tayyip Erdogan for president of Turkey. He was speaking to a crowd in the overwhelmingly ethnic Kurdish town of Van on June 4. And he was letting the incumbent have it.

Ince played a video of Erdogan giving a speech to a Kurdish audience the day before, then suddenly stopping and leaving the podium when his teleprompter malfunctioned.

Erdogan called the snap June 24 elections in April, likely hoping to catch his opponents off guard and consolidate power as president following a referendum last year that grants new powers to the head of state and transforms the nation of 83 million from a parliamentary to a presidential system.

The election comes at a time when Turks and international observers have grown worried about Erdogan’s arrogation of power, especially after a failed July 2016 coup attempt that ignited a crackdown by the president against opponents, journalists and civil society. Since then, Turkey has been governed under emergency law. Thousands of people have been arrested, tens of thousands purged from the civil service, and the press severely restricted. After these elections were announced, Erdogan’s opponents initially feared the president would steamroll his opponents to consolidate even more power.

But Turkey’s embattled opposition for once has failed to follow the script. Three important opposition parties have joined together with a smaller party to form a block that includes liberals, Islamists, and nationalists, and they have pursued a strategy to woo the minority Kurds who are seen by many analysts as the lynchpin of the elections.

Both Ince and Meral Aksener, the elegant auburn-haired female leader of the new nationalist party called Iyi, are charismatic on the stump, taking square aim at Erdogan, who will be running for reelection on the same day as voters decide on a new parliament. Their alliance includes the Islamist Felicity Party, which is led by one of Erdogan’s former fellow travelers, and another minor party.

All the major opposition parties appear to be coordinating strategies to energize their bases and maximize their shares of seats in parliament against the ruling Justice and Development Party, known as the AKP, while seeking to deny Erdogan an outright majority in the presidential race in order to trigger a July 8 runoff.
“The opposition has been rejuvenated,” says Sinan Ulgen, a Turkey specialist at the Carnegie Endowment for International Peace. “Now the opposition is driving the agenda. In the past it was the Erdogan and the AKP. Erdogan is still most likely to win. But there is enough reason to think that the outcome is far from being pre-ordained.”

The election is the first since the referendum last year and will immediately trigger the changes, transforming Turkey’s government by eliminating the post of prime minister and shifting authorities between parliament and the executive. Critics say the new system will be more autocratic, giving the president too much power, while Erdogan’s supporters say it will make the government more democratic and accountable.

Truth is, no one’s quite sure how the new system will operate in practice. But anxiety over a potential watershed moment in Turkey’s political history has galvanized Erdogan’s opponents.
For once Turkey’s opposition parties are trying to break out of their various bubbles. Ince, the secularist, is noting that his sister wears the hijab and that he doesn’t oppose religious piety. Aksener, head of a political trend traditionally hostile to Kurdish aspirations, has called for allowing the jailed Kurdish presidential candidate, Selahattin Demirtas, out of prison. Felicity, the Islamist party, holds campaign events featuring music and dancing.

To be sure, Erdogan remains Turkey’s most popular politician, and not just because his fiery fusion of Islamist and nationalist populism appeals to a broad swathe of voters. Over the 16 years that Erdogan and the AKP have dominated Turkish politics, the country’s GDP has tripled, pulling poor, rural Turks into the ranks of the urban middle class. His path to winning a majority of votes appears far clearer than that of the opposition. AKP members and supporters say they are content to run on their track record, including Erdogan’s ability to generate giant public works projects like airports and hospitals.

“The opposition doesn’t have a great vision or clear vision for what they will do; they don’t promise any hope to people,” Harun Armagan, an AKP spokesman, told The Daily Beast. “We will work for a society where everybody will able to go to university, get the best health care. We are working for nuclear power plants to make 100 percent of Turkey’s energy produced here.”

Polls show Erdogan winning in a head-to-hand match with Ince, the candidate of the secular liberal People’s Republican Party, known as the CHP, which is Turkey’s second largest party. But it’s only a slight majority. Many Turks have been concerned about Erdogan’s heavy-handed rule over the last five or six years. Plus, Turkey’s economy has been faltering, with the lira hitting all-time lows and inflation at double digits, burdening consumers in Erdogan’s base.

“They’ve stumbled because the economic numbers are bad,” said Aaron Stein, a Turkey specialist at the Atlantic Council, a Washington think tank. “Life is more expensive. The government blames outside powers for the troubles. But people are savvy enough to understand the government is largely responsible.”
In contrast to his usual energetic, combative image, the 64-year-old Erdogan appears tired and easily flustered on the campaign trail, as shown by the teleprompter mishap. In the past he’s been blessed with colorless opponents who made him look good. His main rival in 2014, Ekmeleddin İhsanoğlu, was a bland chemist who refused to hold rallies during the holy month of Ramadan. Even then Erdogan won with less than 52 percent of the vote. The referendum last year adopting a presidential system passed by about the same margin.

“Of course, Erdogan may lose,” Veli Agbaba, a CHP lawmaker and party leader, told The Daily Beast. “At the end of 16 years there is an AKP that is old, outdated and cannot offer anything new to the public. All they do is promise a bad copy of our election manifesto.”

In Ince, the president has met a worthy opponent, a streetfighter who’s 10 years younger and has roots in the same rough Black Sea town of Rize that Erdogan’s family comes from. “He’s such a shot in the arm for the opposition—charismatic, a good speaker,” said Stein. “He attacks Erdogan on substantive issues.”

Aksener, 61, also plays a vital role. She broke away from the National People’s Party, or MHP, after its leader Devlet Bahçeli aligned with Erdogan. She could pull nationalist voters away from the president’s camp. The Felicity party gives quavering pious voters queasy about Erdogan’s authoritarian tendencies an excuse to vote against him.

Notwithstanding the fact its leader is in jail, the People’s Democratic Party, or HDP, which draws Kurdish and leftist votes, will be key. Demirtas, a brash and outspoken 45-year-old, was locked up in November 2016, accused of supporting armed Kurdish separatists in their decades-long war against the Turkish state. So he is unable to campaign himself except through brief social media appearances. Erdogan also competes for the votes of pious and traditional Kurds, so whether and how they vote will be a crucial factor in the election outcome.

For the opposition to deny the AKP a majority in parliament, under current rules the Kurdish-led HDP likely needs to win more than 10 percent of the vote, which would allow it to form a bloc in parliament.

“Kurds are the ones that will determine the outcome,” said an analyst at one research organization, who spoke on condition she not be identified. “The rest of the vote are consolidated. But the Kurds—no one knows which way they will sway.”

Opposition candidates see this election as the best chance they have to weaken Erdogan, if not defeat him, by at least snatching away control of parliament. Opposition parties have promised a return to the parliamentary system, bolstering of democratic institutions, and an end to Turkey’s combative regional role and what they describe as Erdogan’s divisive domestic policies. Askener, who has hired Google AdWords to promote her candidacy and the party, has promised among other things to lift Erdogan’s outlawing of Wikipedia.
“Erdogan politics, which is constantly fighting both inside and outside, will end,” said Agbaba, the CHP lawmaker. “We will bring about social peace among the divided sections of our country, and we will repair our neighbors’ and international relations.”

Erdogan supporters acknowledge recent economic troubles, but say they’re confident that voters will continue to trust the president based on his lengthy track record. Erdogan has been either president or prime minister of Turkey since 2003, and previously served as the highly popular mayor of Istanbul, the country’s commercial and cultural heart. Armagan, of the AKP, said that volunteers flood the party’s offices asking to help out with the elections. He dismissed the opposition’s gestures toward embattled groups, including Kurds, that the AKP has sought to draw into politics over the years by addressing mundane concerns such as irrigation in rural areas and housing costs.

“The strategy the opposition has is very cheap,” he said. “They think they will get the pious vote if they have a candidate who wears hijab, that if you put up a Kurdish candidate you get the Kurdish vote. It’s like a white American saying, ‘I have black friends.’”

The article by Borzou Daragahi first appeared at The Daily Beast on June 8, 2018.
https://www.thedailybeast.com/can-voters-bring-down-turkeys-erdogan?ref=author