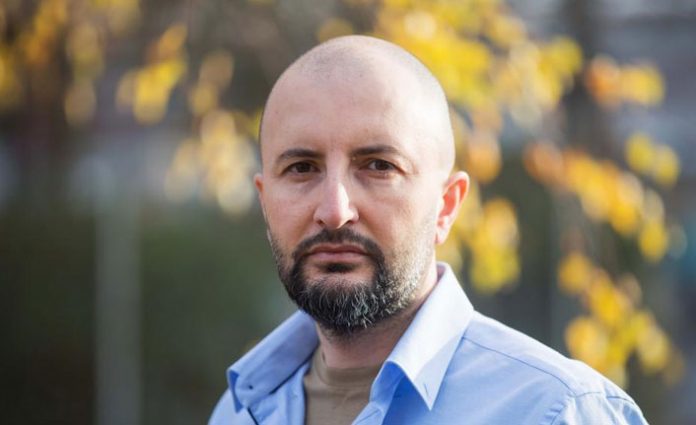 With his in-depth and disclosing news dossiers covering the recent developments in Turkish politics and social milieu, Turkish investigative journalist Cevheri Guven carved himself a niche as a profoundly-trusted journalist and reliable source of news about what actually happens with and around the Erdogan regime in Turkey and abroad. His latest disclosure of critical information on the July 15, 2016 coup attempt drops the mask on the face of perpetrators and puts him under the spotlights again with much praise from the oppressed and flak from the oppressors.

Since long, Cevheri Guven has been a perceptive critic for the shady and antidemocratic Erdogan regime. He worked in several prominent Turkish media organizations in his career, but the weekly Nokta (Spot) magazine which he led as the executive editor made him a brand in investigative reporting. A Nokta cover with Erdogan taking a selfie with the flag-draped coffin of a martyred Turkish soldier in the backdrop asserted Guven’s stance as an insightful critic of the Erdogan regime in 2015. After this sensational but factual cover story, the Nokta office was raided by police, all issues with that story were recalled from the newspaper stalls and distributors, and the magazine executives including Cevheri Guven were arrested.

The story of Cevheri Guven is greatly interesting with several heartbreaking turns. Having suffered the repercussions of an oppressive regime before and after the false-flag July 2016 coup attempt, Guven was jailed for almost two years. Fleeing Turkey with his family soon after his release, he made a resounding start and continued practicing his journalistic profession. He lived in Greece in self-exile for months and reached to Germany where he lives as a conventional asylee.

He started reporting from Germany through YouTube and added another feather on his cap by becoming a renowned digital journalist in a short time. His videos are viewed by millions and his influence grew exponentially across Turkey after he systematically cracked on censored and sensitive agendas the incumbent regime in Turkey has always wanted to conceal. He disclosed clandestine and sensational corruption files based on factual documents, names, and events on many fronts notwithstanding the titles or the political influence of the perpetrators. Guven’s popularity had another boost especially after he analyzed and provided insights on his YouTube channel about the recent disclosures made by the Turkish mafia leader Sedat Peker.

The Erdogan regime couldn’t deny the exposés made by Cevheri Guven, so they simply wanted to silence him by blocking his YouTube channel to access in Turkey. The regime officials thought blocking the channel would also break Cevheri Guven’s influence on the Turkish public opinion. This did not work, though. People found alternate ways to access Guven’s videos on YouTube. Given the absence of free media in Turkey, people with conscience seek accurate and impartial news about their country especially in current affairs; hence, they have been attached to journalists like Cevheri Guven wholeheartedly. While almost every video published by Cevheri Guven is banned by the regime’s courts, they are watched millions of times.

Cevheri Guven’s latest exposé about the shady and bloody July 15 coup attempt triggered hot discussions. Those who do not wish the motives of the coup to be enlightened launched attacks on Cevheri Guven who disclosed an unheard information about CNN Turk’s Hande Firat, the so-called valiant journalist of the coup night, who talked to Erdogan on Facetime live amidst the so-called uprising. During that Facetime-flavored broadcast, Erdogan called people to the streets and 251 civilians were killed.

While several more questions about that Facetime talk between Hande Firat and Erdogan remain to be answered, Guven exposed that Hande Firat had met Nuh Yilmaz, Director General of Media Affairs in the MIT (Turkish National Intelligence Organization) a day before the coup attempt in an outskirts suburb of Ankara away from curious eyes. Hande Firat had been assigned the duty of conducting the live teleconference with Erdogan on the night of the coup attempt. This exposure smashed the walls of the Erdogan regime based on lies, deceptions and manipulations. The official rhetoric about the coup has been based on the so-called accuracy of the coup attempt with perpetrators defined at lightning speed by the government. With this disclosure, Cevheri Guven has revealed that the July 15 coup was a staged setup to purge opposing views from the state departments. To attain this end, the regime had planned every event including Erdogan’s Facetime talk with Hande Firat along with the ‘correct’ number and weight of people to be killed to generate an impact.

After Cevheri Guven’s exposé, the walls of the regime built on lies shook heavily, leading a quake in Ankara. All journalists operating for the Turkish intelligence launched a smear campaign against Guven to invalidate his exposures. The level stooped by the journalism in Turkey in absence of free media is well summarized by the Reuters explaining how Erdogan regime controls the %95 of the entire media through the Directorate of Communications under the Office of the President. In this investigative news, Reuters turned the spotlights on Fahrettin Altun, president of the Directorate of Communications, who controls the Turkish media as the strongest man. Further than this, several Turkish journalists also work as operatives for the Turkish National Intelligence Organization, helping the agency to manipulate the public opinion on any agenda whenever needed.

Journalists working for the Turkish intelligence have been well known and much discussed issue in Turkey. However, it has never been crystal clear until the saga between Hilal Kaplan, a prominent member of the Pelikan political movement which engineered several political intrigues resulting in the Prime Minister Ahmet Davutoglu’s resignation, besides the ultranationalist Oda TV editors Soner Yalcin and Toygun Atilla. Following the OdaTV’s coverage of Hilal Kaplan’s divorce from Suheyb Ogut – another Pelikan operative – Kaplan harshly reacted to the news and spew her dislike by writing, “One who is human enough knows to respect private lives, but you do not. Forward this message to Nuh, whose lapdogs you are.”

Hilal Kaplan’s harsh remarks worked the napalm effect on pro-regime media corps and the relevant government officials. Such a revelation from the mouth of a certified troll queen like Hilal Kaplan cast the named journalists to silence and the news she’d harshly reacted quoting her privacy was deleted from the website and social accounts of the OdaTV soon after. The expression ‘Nuh’s lapdogs referring to the journalists who work for the Turkish intelligence made the trend topic on Twitter in Turkey. Cevheri Guven’s disclosure about the meeting between Nuh Yilmaz and Hande Firat a day before the staged coup triggered a tsunami. Almost automatically, Cevheri Guven’s exposé came in hot on the target, making people easily understand what and who Cevheri Guven has been mentioning. Cevheri Guven signed his name under the most critical revelation about the July 2016 coup attempt. This will surely change the direction of the winds in Turkey.

Journalists like Cevheri Guven practice their profession in hardship with limited resources; yet, the quality and impact of their work is immeasurable and extraordinary. No matter what the Turkish state officials and their mouthpieces in the regime-tutored Turkish press say about him, the public sees Cevheri Guven as a reliable news source and watch his videos come what may. His impactful and principled investigative journalism and the way people of conscience in Turkey see him make Cevheri Guven the antithesis of the strongest man of the regime-tutored Turkish media. While Fahrettin Altun is the trademark for the manipulations, deceptions and lies for the incumbent regime, Cevheri Guven is the reliable brand for truth, facts and freedom in Turkey.