HomeExpertsClicking on war icon for peace!
ExpertsTop Stories On Turkey

Clicking on war icon for peace! 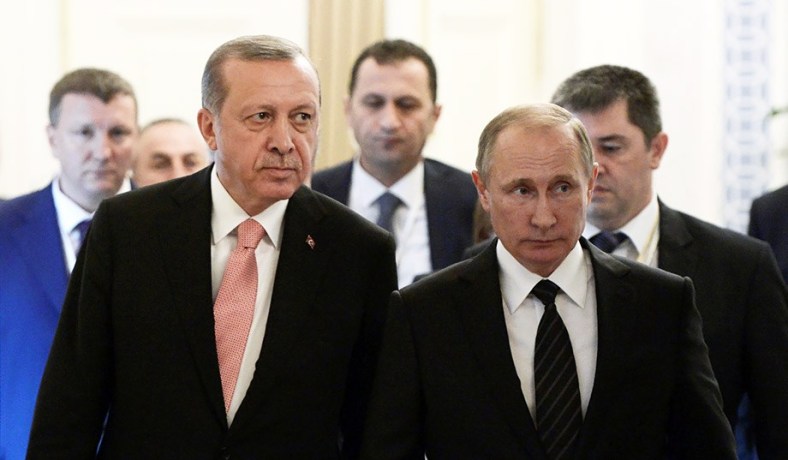 East at the Kremlin in Moscow, West at the Pentagon in Washington, or at the Palace ‘centre’ in Ankara, peace is the common or recurrent key word. To borrow from Mathematics, it is the lowest common multiple.

But alas! What do we thereafter come across or encounter above the line? It is all about the PATRIOT, S-400, and F-35 programme zeroing in on Turkey’s acquisition of some 100 of the stealth jets. Then we know. The actual exercise is one of substitution of war for peace.

This takes world reasoning twenty centuries back to the Roman times when the peace formula was:”Si vis pacem, para bellum” – meaning if you want peace, prepare war. So, today, what are we doing as citizens of the 21st century of science and technology? We are thinking in terms of missile systems for bringing peace!

In this particular case, the game is between the Kremlin, Washington and Ankara, taking advantage of the loophole of an unending war in Syria. Currently in its seventh year, it very easily stands chances of being recorded in history books as the Syria War, starting from the failed Arab Springs.

The war in Syria is an ill wind. No wonder it is serving nobody any good. It is a sad story for many and the world as American and Russian leaders test their weaponry. Otherwise, what does the following reveal?

In December, last year, the US government gave Turkey an offer to purchase a $ 3.5 billion PATRIOT missile system. Eight months on, this is withdrawn in retaliation for the country’s receipt of the Russian-made S-400 system.

As if this was not enough, the US also ditches – or put more precisely ejects from — the F-35 program, preventing Turkey from acquiring some 100 of the stealth jets and removing Turkish companies from the production chain.

And there is nothing that can prevent the Trump Administration from falling back on the Countering America’s Adversaries Through Sanctions Act to further ‘discipline’ Turkey. Turkey is a member of the North Atlantic Treaty Organization (NATO) in which the US plays a kind of the prefect role.

As fate has it that misfortunes never come single, in the echo of these events, raids nearly hit Turkish military convoy heading to one of its observation posts in Morek in northwest Syria, drawing strong condemnation from the defense ministry and a call for “urgent measures” to prevent a repeat of the incident.

Setting conditions for a surprise meeting between Turkish President Erdogan and his Russian counterpart Putin, the Kremlin says it comes after the leaders have agreed on telephone to “activate mutual efforts” to ease the situation in Idlib.

The Palace in Ankara says the attacks were contrary to “existing agreements as well as our cooperation and dialogue with Russia”.

Syrian government responds that the Turkish convoy had entered the country carrying ammunition to help opposition fighters, who had lost ground in a Russian-backed operation.

President Erdogan is an opponent of President Bashar al-Assad and backs forces fighting for his removal. So, a situation of mutual distrust between the Syrian and the current Turkish administrations is clear.

What beats the mind is that if Russia backs Assad, why should it enable Erdogan to acquire S-400 missile system? Erdogan last year struck a deal with Moscow to protect the Idlib Province from a potential government offensive. Testing weaponry?

Again, if business retains its name, how come the US finds it extremely comfortable with losing a $3.5 billion PATRIOT missile deal with Turkey in the wake of an acquired Russian S-400 missile system? Lost testing weaponry chance?

In the middle of September, this year, President Erdogan is to host Russian President Putin and Iranian President Hassan Rouhani for a summit on Syria in Ankara. Iran and Russia are allies of Assad and have been working with Turkey for a political solution to the conflict.

How can a political solution arise from the circumstances of interested parties taking options of being armed to the teeth with sophisticated weapons like S-400 and in search of the Patriot? Tongue in the cheek?

Another side of the Syria equation has been the issue of establishing a demilitarized war buffer zone; the main players of which are the US and Turkey. It all started with Turkey threatening and later postponing an offensive in the Kurdish-controlled Syrian area after agreeing with the US to create safe zone inside Syria north-eastern border with Turkey that would be cleared of the Kurdish People’s Protection Units (YPG) militia.

The US could not but drag its feet on this issue. Dislodging the YPG is not an easy option. They were Washington’s main ally on the ground in Syria during the battle against Islamic State of Iraq and the Levant (ISIL or ISIS.

Latest Ankara reports talk of a fully operational Turkey–US centre already in place for establishing and managing a safe zone in north-eastern Syria. It will help coordinate the establishment of a buffer between the Turkish border and Syrian areas controlled by US-backed Kurdish People’s Protection Units (PYG). It is said that the centre will be run by one US and one Turkey army general.

In between, 500 civilians are reported by the United Nations to have lost their lives to hostilities in Syria since April. With about half of its people having fled the country, Syria has created the biggest number of the refugees the world has seen in recent years.

Looking at what is taking place on the ground one realizes the fact that like in earlier wars – civil in particular—no sense can be seen in them. The case of Syria is just unnecessary human suffering when the rest of the world is watching, and others even go to the extent of demonizing refugees.

It should suffice to note that peace cannot be attained through war. This was the Roman’s formula. And history tells what happened to their empire. The real tool for peace is dialogue.