Compromise should be hallmark of Biden-Uhuru relationship 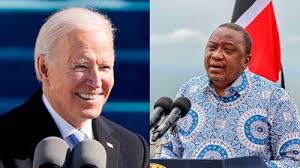 The US President Joe Biden is and wants to be different from his predecessor, Donald Trump, in policy and actions within and outside America. He reaches out to restore confidence in the United States among the Americans and outside.

Restoring that confidence is especially important among people of African lineage, whether in the Americas or in the African continent. He also has to show confidence in the ability of various Africans to deliver.

Biden has also reached out to people of influence in Africa and among them Kenya’s Uhuru Kenyatta, a man of regional influence presiding over one of Africa’s pivotal countries. Since Biden talks of respecting everyone, he would not do Trump things like insulting African countries or firing his ministers when they are in Nairobi. He instead called Uhuru to discuss common challenges, in part because Kenya is the regional powerhouse in Africa.

With the Equator cutting the country into two halves, Kenya is of geo-strategic interests to competing global powers. In matters international, Nairobi is the diplomatic, socio-cultural, communication and economic capital of Eastern Africa.

Those realities are in Biden’s mind as he tries to reconfigure the US to regain lost global prestige.

Kenya has common interests with the US ranging from sharing ideals, mutual inspiration, to confronting security threats. Mutual inspiration in the 1950s opened opportunities that led a Kenyan, Barack Obama Sr, to Hawaii where he sired an American president who is an age-mate of Kenyan President Uhuru. Biden, therefore, has personal interest in Kenya in that it was the Kenyan American, Barack Obama, who made him vice-president and ultimately, the president.

There are times when Kenya and the US have had pronounced differences, especially when it comes to American-led Westerners dictating to Africans. Biden is unlikely to embrace such power play crudity. At independence, Kenya chose not to rock the Western boat and accepted American intellectual assistance.

Both countries are now members of the United Nations Security Council (UNSC) and they have to worry about tackling several challenges to the global commons. Biden wants the US back into the arena of the global commons. This makes Nairobi, the world capital for environment and habitats, of interest to Biden.

Washington and Nairobi would have interests in rehabilitating the reputations of The Hague-based international organs, ICC and the ICJ, that command little respect because they behave like big power tools to fix small countries. Many countries ignore ICJ opinions when it comes to survival. The two, Washington and Nairobi, can link up to demand reforms.

Also of concern to both countries is Somalia’s tendency to make the Horn of Africa unstable. Although it lacks legitimate government, having failed to elect a parliament and an executive, Somalia retains the semblance of a state and is open to multiple sources of manipulations, internally from Al-Shabaab and externally from extra-continental forces trying to extend imperial influence and control maritime resources along the East African coast.

One of Kenya’s tasks at the UNSC, therefore, is to build a two-pronged concerted effort to curb Somalia’s irredentist proclivities while stabilising its internal governance. This makes defeating Al Shabaab a security priority because it remains a global threat to US and Kenyan interests.

Biden’s call to Uhuru was recognition of Kenya’s geopolitical importance to American global interests and intimated willingness to work together at state and personal levels.

The UNSC is one place to work together on various challenges. Aware of the global influence competition between the US and China, Kenya needs to steer clear of their rivalry. Biden is playing catch up to Xi Jinping partly because Trump gave China advantage by messing up the American image on issues of global commons. In promoting American interests, Biden might push Kenya to reassess interactions with China. He should be listened to, but Kenya’s interests demand that it should not accept instructions.

It should, instead, undertake global policy review on its relations with all powers. Working closely with Biden should not be synonymous with Uhuru distancing himself from China’s Xi or Vladimir Putin in Russia.

Maintaining ‘dynamic compromise’ approach in world affairs is to safeguard Kenya’s interests. Respecting each other’s interests should be the hall mark of the Biden-Uhuru relationship.