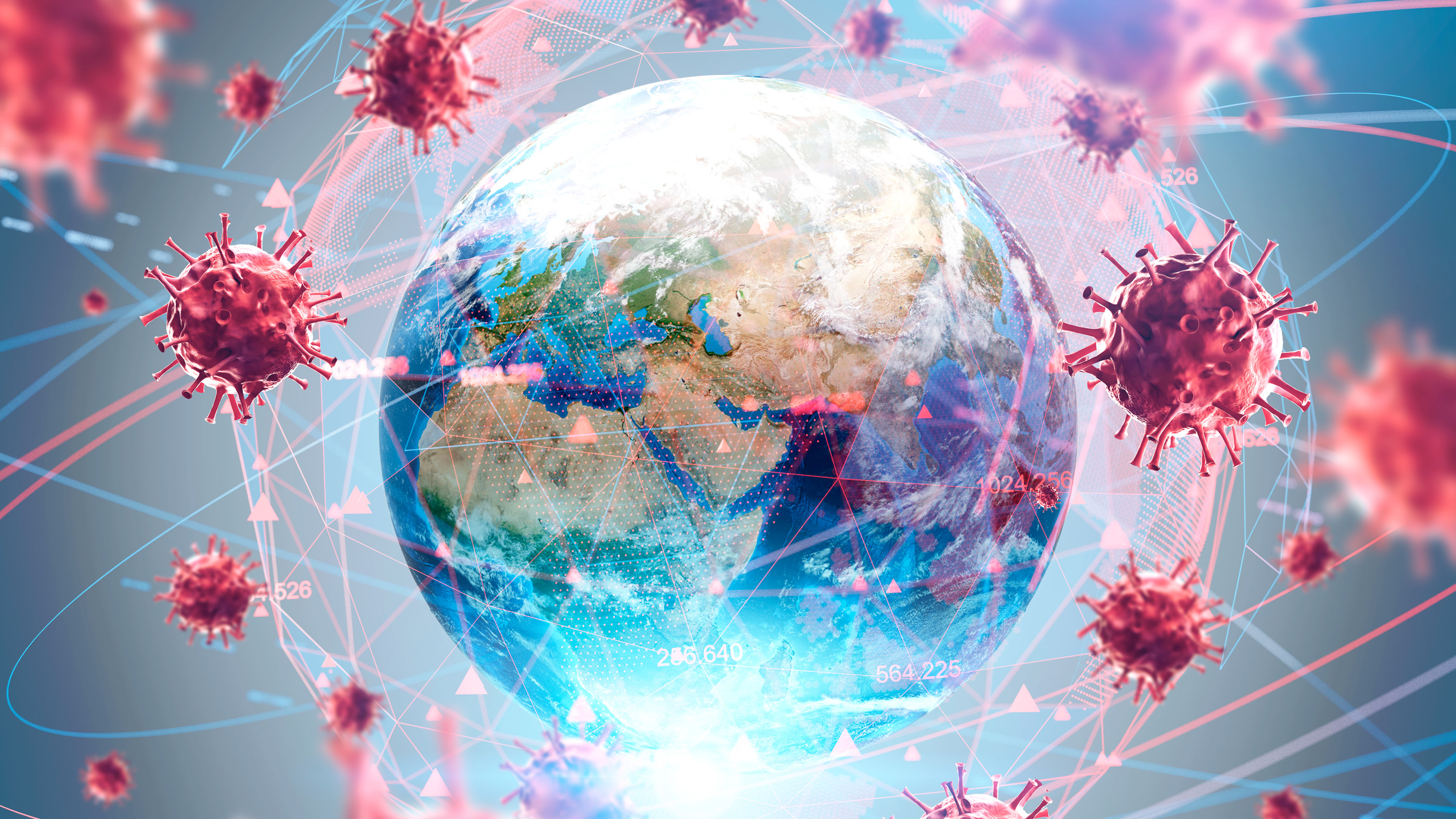 Coronavirus, the latest in terms of pandemics is a serious challenge to the known world order. Although it is not the first, or even the most costly in terms of infections and number of deaths, it is the most media covered and intense in terms of concentrated global effect. Within a very short time, it has affected the entire world and each country struggles to protect itself from this invisible enemy. Yet, curiosities arise as to the pattern of its spread and where it inflicts the most damage. It appears to be a disease for powerful countries whose people have enough resources to air travel widely and frequently.

The coronavirus, hitting the “developed” world harder than the “developing” rest, forces countries to rethink global realities. Its rapid spread, being global rather than regional, provides opportunity for policy makers to re-examine global responses to de-bordering unknowns. Since it is not possible to contain such global threats to single countries, isolationist thoughts are thereby threatened. Yet there also are those who, instead of seeking global cooperation, spend time engaging in blame games. They are pre-occupied with trying to fix and to threaten the stability of others and to impose their domination; they increase global insecurity.

The current affliction distribution, looking at the top countries in coronavirus infection, is heavily in countries that are powerful militarily, technologically, economically, and in terms of global influence. The United States, the most powerful country on earth, leads the way in every way with over 1.3 million inflicted. Powerful United Kingdom, Italy, France, Spain, Russia, Germany, Turkey, Iran, and Brazil follow the Americans at a respective distance, each with over 100,000 afflicted. China, with almost 90,000 and Canada with near 70,000 afflicted are close numbers 11 and 12. These twelve countries, with the United States again leading at 80,000, account for more than 80 percent of the global deaths. What they all have in common is that they are rich and powerful. Most of them are in the exclusive club of world bullies.

The way all big powers reacted to the coronavirus outbreak, which small countries tended to copy, was typical. Since crises tend to provide opportunities for countries to rise to the challenge, they often do it in two phases. First, they try to “contain” and second they think of the aftermath, meaning recovery and reconstruction. While some states handle the two phases well, the first blending into the second, others are stuck in assorted confusions. So far, the reaction to coronavirus global crisis fits the typical.

Most states, therefore, adopted and concentrated on the first phase response; containing and curing coronavirus. Their performance is mixed because of three reasons. First, there was general disbelief that such a thing could happen. The disbelief made them behave as if coronavirus was therefore probably not big threat. Second were half-hearted measures in attempts to protect perceived interests while appearing as if they were responding. This was by balancing possible loss of trade on one side and containing the spread of the disease on the other. When coronavirus struck global powers and afflicted their “leaders”, however, the attitude changed. Third was the subsequent rise of global “panic” that entailed emergency declarations, flight cancellations, strange greetings, social distancing policies, curfews, and lockdowns.

In many instances, the “panic” decrees were not well thought out. This reality made decree implementation to collide head-on with the official reasons for the policies. To compensate for previous laxity and half measures, the panic stage released pent-up dictatorial desires on citizens. Thus, in the name of fighting coronavirus, latent dictatorship showed up and trashed humane considerations. In some countries, police brutality and cruelty became the norm and seemingly advanced the very opposite of what was intended. Crude ways of implementing good intentions, therefore, tended to enhance the spread of coronavirus and, most important, to alienate the public.

Excessive pressure on people, and appearance of implementation selectivity, often boomerangs. This happens when rulers violate a cardinal rule of governance, to avoid over scaring people into losing fear of government. While there is always room for a “little fear” of consequences, there is no room for oppressing people and driving them into losing fear. Wanton harassment and beatings, therefore, are recipes for potential uprisings and paint negative images of the state. This is contrary to original intent. When some government officials violate the same rules they are supposed to enforce and then show excessive zeal in beating citizens into “compliance”, some unto death, they generate resentments and invite “uprisings.”

The emergence of “uprisings”, partly because of confusion over policy pronouncements and implementation, necessitates constant policy and strategy reviews. Some countries have more than coronavirus to worry about. They have the unusually heavy Noah-like floods, landslides, locust invasions, and self-inflicted political wounds. When they started taking the coronavirus seriously, they also tended to ignore the other more devastating calamities. They also sent their pre-coronavirus power game mischiefs into temporary political hibernation.

Sending political mischief into hibernation did not mean policy clarity. Initially, with top officials seemingly working at cross purposes, the police appeared ill prepared for enforcing policy; a few took it as license to extort. Subsequently, reviews and strategy adjustments became necessary. The reviews would link policy objectives with the means for achieving them by fusing common sense practicalities with ground realities. They would ensure “common touch” and avoid uncivil confrontations among the “citizens”.

Globally, there were also debates as to whether there existed alternatives to copying responses from the big powers and the World Health Organisations, WHO. In the forefront of that questioning and charting separate paths were such African states as Senegal, Tanzania and Malagasy whose “novel” response to “Novel COVID-19” aroused global curiosity. As the Senegalese claimed they had made coronavirus testing kits that cost only one dollar, Madagascar’s DJ President Andrey Rajoelina offered “curative” herbal drinks as a way of containing coronavirus that, despite WHO warnings, seemed to work. As a result, Tanzania and Malawi ordered shipment of the Malagasy herbal medicine. On his part in Tanzania, John Pombe Magufuli attracted attention by refusing to shut down daily operations, ridiculing WHO testing advice, and ordering Malagasy’s “curative” herbal drinks for Tanzanian to enjoy.

Irrespective of which “containment” and “curative” strategy each country adopted, there are signs of the second phase or recovery and reconstruction phase. Subsequently, addressing the post-coronavirus “what then” questions take centre stage. Power brokers have started behaving as if their countries are in post-coronavirus phase. They therefore retrieve pre-coronavirus political mischief from hibernation, flout coronavirus rules, devalue the coronavirus threat, and make old style political chicanery normal again. Besides the returning antics of competing politicians, however, countries face the challenge of rejuvenating national economies. They have to re-think political economies in the midst of global realignment with each country looking for its survival niche.

In the aftermath of coronavirus, world realignment and power shifts are inevitable and force countries to search for global niches. This calls for fresh “grand strategy” minds with daring policy ingenuity. Those seizing the moment lead others, even in blame gaming. Having ignored warnings of the virus, for instance, the US and China blame each other and still reserve some blame for Africa.

While US President Donald Trump blames Barack Obama and WHO leader Tedros Adhanom Ghebreyesus, the Chinese mistreat and blame Africans for coronavirus although the virus was Chinese born at Wuhan. China collaborates with France, a geopolitical buddy, on Africa. France, despite being heavily coronavirus inflicted with thousands dead, still find time to plot engineering coronavirus induced political instability in African states. Britain has the second highest number of coronavirus dead in the world, next to the United States, and still has thoughts of using Kenya as a laboratory. These are realities that African countries cannot ignore as they search for post-coronavirus recovery and global niches. The African countries need ingenious “grand strategists” to withstand concerted pressures from re-aligning dominant powers.