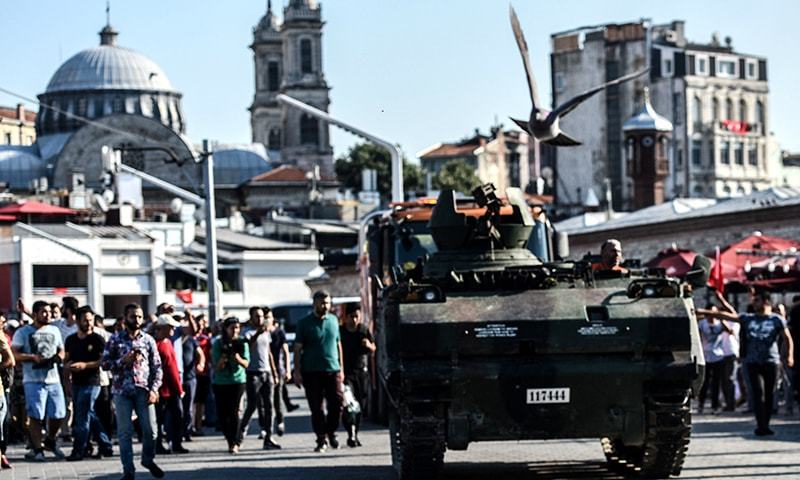 Defining the military coup of 2016 in Turkey. “This is a gift from God to cleanse the Army”
Recep Tayyip Erdogan (President of Turkey)

“Who benefits from the coup is more likely orchestrates it, who is blamed and harmed by is not part of it”
Mahir Kaynak, (Former Turkish Intelligence Officer)

Seizures of power are often dressed as bold political statements. A major event carries political implications. Dictators are seldom caught in the genesis of dictatorship. They rely on a benign personality cult which supports leadership over a fragmented nation. Such things ossify the sectarian divide of the nations. Greater the sectarian divide, the greater chance exist for dictatorship. The best way to set the stage for dictatorship is to create events that work toward the advantage of a power elite. The best specified as exclusive opportunism that has one end in mind: total control over frequencies of national power from judiciary to education. Though, dictators never announce or name his regime a totalitarian, keep the balance by showing some type of the behavior which are neither democratic nor a dictatorship.

A complex of dictatorship defines as a supreme beacon of power, in its dominion, there is no higher law in the land. Acts of enablement furthers the reach of the high and mighty dictator. In this environment, the dictator exercises the ability to create circumstantial laws out of thin air. That is why the importation of crisis is so crucial to a dictator’s rise to power. Laws of circumstantial enablement would simply not exist beyond areas of crisis. We find ourselves burdened with a great paradox. A tumultuous episode can be used to restore or destroy a nation. That realization compels us to revisit the fact that what brings good can equally be exploited for evil.

A military coup is the dictator’s greatest alibi to power. An isolated crisis is created only to be exaggerated as a major event. It all depends on how the national populations reacts to aftermath. Throughout much of the developing world, one dictatorship is simply replaced for another all under alias of a military coup. Wide arrays of justifications are used to legitimize the plight of the coup leaders. The most sought after alibi is one of restorative justice. Incumbents in power are condemned as corrupt, ineffective and criminal by their opponents. It should be no surprise why the opposition suddenly styles itself as heroes of a new revolutions.

The success of a military coup relies on the support it receives from the armed forces, usually, a revolutionary faction of the military high command function as the brains behind armed coups. Fail to gain the majority support of the armed forces will inevitably bring about its defat. Without factoring in the cost of betrayal, a lack of vision, cohesion, and leadership, all four will eventually lead to demise of a revolutionary coup. What is the most effective medium to push an armed coup in the central threshold of national power? Under the cover of night, successful coup will forge new governments before daybreak, anything short that ends in an abrupt failure. Like Reichstag fire, some coups are planned to be lamed to lead the incumbent and elites to gain power through constructing the coup for further legitimization and justification.

However, military coups are not always what they seem, we often underestimate the insatiable appetite of the dictator. They thrive on opportunism and are willing to push the known limits if it means more power. The remorselessness of the dictator is matched by his relentlessness. He is a person that pursues an unprecedented advantage over his sworn rivals. The best dictatorship shows little restraint which is why remorse is seen as nothing but an alien concept. When the sovereignty of a national is viewed as nothing more than a dictator’s personal property, anything is far for the dictatorial taking. A psychological obsession of power ultimately leads to its most heinous perversion.

Would a dictator hatch a military coup to further consolidate his power through acts of circumstantial enablement? Events are thought to be impossible until they become probable. In this case, probability alone is enough to attribute possibility to the impossible. Arrogance is by far one of the worst qualities of the dictator. They became a supreme edifice on to themselves which explains why the law of dictatorship is taken from the will of the individual dictator. It seems abundantly clear that for every dictator, there is an inner Stalinist complex within. A dictatorship is carried by its own inner loyalty. It has no limits and will stop at nothing to enslave standing populations at the expense of their posterity.

Rather than appointing the military to impartially facility a general referendum on government, budding dictatorship use supreme acts of enablement to gain absolute control. This generally works best whenever there are a diversity of political actors in one nation. Each one threatens to uproot national unity which is generally seen as an overt threat to peace. A nation’s situational abyss folds into a national vacuum of power that creates an advantageous alibi for supreme opportunism. Inevitably, the national crises leads in the aftermath of a failed coup or revolution. The people fear threats of civil strife which is why dictatorial strongmen are blindly sought after. As repressive as they are, dictatorship keep the peace at the expense of a nation’s dignity.