Did Putin blackmail Erdogan a day before the 2016 ‘false flag’ coup attempt? 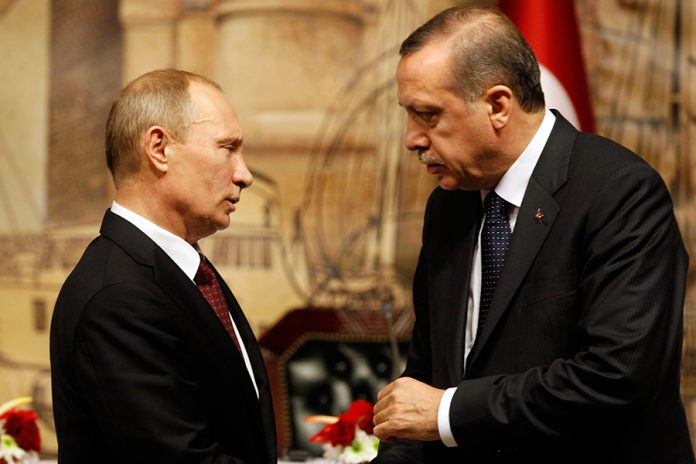 My readers must be knowing the facts related to July 15 coup attempt and its heartrending details in general. Last week, another crucial confession was made by a prominent figure close to the AKP, the ruling party in Turkey. It was not an earth-shattering thing, but a fact that fortified a well-known fact about the dirty realities behind the July 15 coup attempt.

Several shady figures and public faces played key roles in the coup attempt and in turning a failed attempt into a successful vengeance against a social group the Erdogan regime always wanted to get rid of. These figures are numerous, but it would not hurt if we remembered a few: Recep Tayyip Erdogan, Hulusi Akar, Hakan Fidan, Erol Olcok, Nuh Yuksel, Cihat Yayci, and many others. Let me request your attention to Erol Olcok here. He was the advisor to Prime Minister (now President) Erdogan on Public Relations and Outreach and worked for him since Erdogan’s years as the mayor of Istanbul in the ‘90s. Many opine Erdogan would not have lasted this long in politics and remained relevant without Erol Olcok’s PR genius and vision.

An iffy Twitter flood about an impending coup d’état posted by an anonymous account on July 10, 2016, five days before the actual event, explained what would happen after that event across the country. Curious, the sequenced tweets were removed from the Twitter shortly and the anonymous person posted them was soon silent. Almost everyone was sure the tweets had been posted by Erol Olcok, given the diction and the context with a mindset that the so-called military intervention would serve to Erdogan’s designs to shape Turkey and the region from the scratch on every platform.

Yet, Erol Olcok could not ‘foresee’ his own bloodstained future when he was privy to the circles that designed and executed the stages of the sure-to-fail coup d’état to benefit the Erdogan regime. Every step of the attempt had been planned with excruciating details on who would do what in the night of the faux coup and what events would follow on the next day. Several minor and major cliques within and around the Erdogan regime assumed their roles in the execution of the plan to eliminate the risks of getting caught and to portray the coup attempt as ‘authentic’ as possible. An exclusive clique decided to have the likes of Erol Olcok and then-Prime Minister Binali Yildirim killed during the initial hours of the attempt to evolve the incident into a more sensational event, make everyone believe the coup attempt, and perform the ‘purge’ in state departments with no resistance.

While Prime Minister Binali Yildirim was saved from that fate thanks to the prudence and brave tactic of his personal bodyguard, Erol Olcok and his son was shot by sniper fire on the Bosporus Bridge in the night of July 15, 2016. No one knows why exactly such a prominent figure and image-maker of the ruling party AKP was on the Bosporus Bridge that night. Most critics claim Olcok had been persuaded to be there to stoke the public reaction to the ‘coup’ attempt. Unfortunately, he did not have the slightest idea that the actual perpetrators of the attempt had lured him and his son to the crosshairs to have their blood shed with several others right there and then. As planned, shortly after their arrival at the bridge, Olcok and his son Abdullah Tayyip were killed by sniper fire along with other citizens. Even though Erol Olcok and his former wife Nihal Olcok had been divorced three years before the July 2016, their three children continued staying with him. Meanwhile, no one knows why he especially went to the Bosporus Bridge with his son Abdullah Tayyip that fateful night.

Immensely moved by the tragedy resulting in the murder of her son Abdullah Tayyip and her former husband Erol Olcok, Nihal Olcok has repeatedly urged the officials to reveal the perpetrators who killed her ex-husband and son on the Bosporus Bridge. Yet, she could receive no proper reply. Her request has not been for her family members only, but for everyone who were murdered on the Bosporus Bridge that night. The Erdogan regime never allowed people to learn what type of weapons and bullets were used on the citizens that night. From the first minutes of the coup attempt, the Erdogan regime ensured restrictions upon people’s access to the evidence and details of the coup attempt. Having shaped their current discourse around their so-called victimization by the coup attempt, the regime leaders and stooges make sure the common people believe the official rhetoric without further questioning.

As everyone who lost a loved one on that fateful night, Nihal Olcok too seeks and asks for the truth behind the events, and the ones who killed her son. Since the coup attempt, she has appeared on several TV programs discussing this issue. Curious, she almost every time said in those shows, “If I talk, you will see what will happen to the powers that be”. Yet, she has never ‘talked’ so far. Lately, she partially talked on a live TV news show and said Erdogan had been informed months before in February 2016 – about the impending coup attempt but he did nothing to stop it. In public, people still think Nihal Olcok knows more than what she has disclosed. For the reasons that are known only to her, she does not disclose further. This being the case, many increasingly find her ‘seeking the truth’ talks futile even after she revealed that Erdogan had been informed about the ‘coup attempt’ months before it took place.

This speck of information does not provide an intense spotlight upon the dark alleys of the coup attempt, while several critical events before and after the incident have already been leaked to provide an insight to the public on how and when the Erdogan regime had been aware of the ‘impending danger’ with its so-called details.

We first learnt from Russian strategist Alexander Dugin that the Erdogan regime had known about the coup attempt. Alexander Dugin, a controversial figure known as the master strategist behind the politics of Putin, had visited Ankara shortly before the failed coup and informed the officials about the ‘impending danger’. He had met with Prime Minister Binali Yildirim, ultranationalist Workers Party leader Dogu Perincek, former Ankara mayor Melih Gokcek and several other Turkish notables. Dogu Perincek later disclosed the reason of Dugin’s ‘timely’ visit and why he had met several officials in Ankara a day before the coup attempt.

There might be two reasons of this visit as it was disclosed to the public. First, Dugin must have arrived to caution the Erdogan regime about an impending coup d’état soon. Let’s analyze this before we move on to consider the second possibility. All the signs and the outcomes of the coup attempt show that the clockwork schedule of events would not be executed without the knowledge and involvement of the Erdogan regime. It is rather naïve to think the Russians did not notice the overt intentions. It would also be naïve to think they dispatched a highly prominent figure from the Kremlin to Turkey only to pass ‘a friendly warning’ that ‘a coup d’état can take place at any time.’ While the timing of Dugin’s visit was highly significant, the reasons provided for the visit has been far from reality once Dugin’s proximity to the Kremlin and President Putin himself are considered. Dugin is not an ordinary professor with a hobby of foretelling events and informing foreign state officials for timely action with friendly advice.

The second possibility is that Dugin visited Ankara to blackmail the Erdogan regime. He must have thought that if he visited Ankara before Erdogan executed his bloody plan and told him ‘Russia knows what you are planning of and what you are doing. If you do not purchase the S400s and once Russia becomes upset and discloses your plans to the entire world, it will also upset and jeopardize your faux coup d’état and the potential benefits you wish to reap from it.’

The second option is closer to mind. Everyone may agree upon it as the best reason Dugin had visited Turkey and talked with the Turkish politicians in Ankara. The Erdogan regime had started negotiating with Russia for the S400s long before the faux coup, after Turkey shot down a Russian fighter jet in 2015. Russia had pushed Erdogan to the corner and made him apologize personally with a guarantee of purchasing the S400 defense systems from Russia. As we glean from the media reports nowadays, Erdogan had first agreed to all demands to appease Putin and settle the disagreement and the Russian anger. Yet, Erdogan also chose not to see the numerous obstacles namely its NATO-member Western allies. NATO objected and threatened Turkey with severe sanctions if the Erdogan regime agreed to acquire the Russian anti-missile systems. In light of likely interventions and strict reactions from the West, Russia realized the negotiations with Turkey for the procurement of the S400 systems were at stake and that Turkey may buckle under pressure and have a change of mind at any time. Russia badly wished to exploit Turkey as a Trojan horse to give the NATO a shudder in morale and score a strategic goal by selling its anti-missile defense systems to a NATO-member country i.e., Turkey. Russia also looked for ways for coercing Turkey to purchase the S400s under all circumstances. When Putin learned about Erdogan regime’s wicked false flag operation, he sent Dugin, his ultranationalist missive, to visit Erdogan, inform him about the discovery of his plans and remind him of purchasing the S400s immediately. Turkey and Russia could reach the initial agreement for the S400 systems in late 2017, after long negotiations. The first shipment was received in July 2019, three years after the faux coup attempt.

During these times when governments ride the gun for disinformation and manipulation, we assess here all possible reasons in seeking the truth. Dugin’s visit, S400s and the July 15 coup attempt in Turkey are like the nodes of the Bermuda Triangle. Yet, one thing is certain: After the staged coup attempt, Erdogan made the purchase of the S400s when he consolidated his power and felt himself the strongest of the land. While one would then expect him to say no to the pressure groups, he chose not to do so. This calls several questions to mind.

Both Nihal Olcok and Alexander Dugin surely know who perpetrated ‘the coup’. Meanwhile, inexplicably for Olcok and fairly for Dugin, they complicate the matters further by hiding the facts and not speaking the truth. Do they and all others who knew the event and its repercussions fear of speaking the truth? I do not think so. Everyone other than the victims are happy with the outcome of the coup and the changes Erdogan has introduced. While nowadays the opposition in Turkey seems to struggle to topple Erdogan and his empire, they also seem to deliberately turn a dead eye on the case of July 15 and its perpetrators. Meanwhile, we will wait and see what the key figures or others have to tell more in the coming months and years.