Does Erdogan benefit from the “rally around the flag effect”? 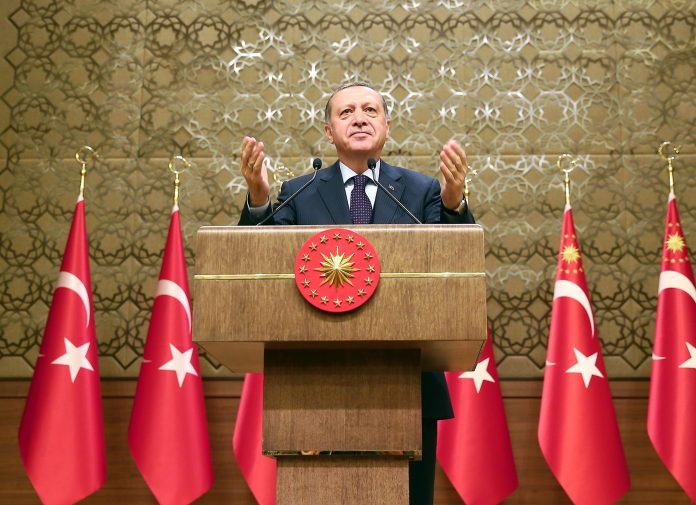 Leaders see it as a safety rope. During times of international crises, governments aim to use rally around the flag as a drive to gain an upper hand and exerts power in domestic politics by rallying people behind the flag.

Several significant events play a role in the rally around the flag, including war, international crisis or setback, strong strategic events that attract public attention, and a country’s withdrawal from international organizations, treaties, or agreements. Another possibility is events that revolve around the leader’s personal character, such as assassinations.

This strategy is used as a tool by governments in times of external crisis, but I believe it also serves as a means of consolidating the population at home, particularly in Turkey, where there is a wide divide between ethnic and political groups and nationalistic discourses that help the leaders get out of a tough situation by rallying around the flag. Since Mustafa Kemal’s use of the rally around the flag effect, Turkish rulers have adopted it as a policy until today.

Scholars have noted that during times of international crises, popular support for presidents rises. This maxim was first suggested in 1970 by Mueler. For example, George W. Bush’s popularity skyrocketed after the September 11 attacks, falling progressively in the months that followed. Other foreign crises and events show that the public approves of the president’s job performance. During the Russian invasion to Ukraine Putin’s popularity soared as reported by Levada Center

However, the evidence from major surveys in Turkey shows that Erdogan isn’t succeeding in evoking a “rally around the flag” effect in Turkey. There is a huge enthusiasm for President Erdogan among his own party members, but the broader populace is ambivalent, confused, and critical of the discourses. As Turkey’s domestic crisis worsened, popular support for the country’s foreign policy waned. It’s possible to debate whether or not Erdogan’s regressing popularity and approval is linked to internal issues..

One-minute event attracted the attention of the public and later evolved into one of the phrases that members of the AKP and Turkish nationalists used out of context. They went to great lengths to utilize it against anyone who opposed them, even going so far as to create a leader who pointed the blame at Israel in history of Turkey, the only Muslim leader dared to criticized Israel politics in Middle East. At a panel held in Davos in 2009, Erdogan displayed a form of self-aggrandizement by criticizing both the moderator and the prime leader of Israel, Simon Peres by using one minute to interrupt. It is known as “One Minute,” and it was established as a kind of political discourse in Turkish society. Within Turkish culture, it is even compared to the “Ottoman Slap.” It is thought that Erdogan made an effort to center the protest on the concept of ummah solidarity among nations that identify as Muslim. If the event had taken occurred today in the face of Turkey’s falling into economic catastrophe and authoritarian rule, the people would not have backed it as strongly as they did in 2009. Turkey’s economy was stable and booming in 2009. That year, 2009, was also significant because it represented the beginning of new efforts for Turkey’s foreign policy in the Middle East. Erdogan needed such public attention to bring Arab streets around his political objective, rally around the global Ummah leading by him.

A plot against the daughter of Turkish President Recep Tayyip Erdogan was reportedly based on a chat between CHP parliament member Umut Oran and journalist Emre Uslu on Twitter in 2015, according to numerous Turkish media outlets that were close to the Erdogan family. Elections were just around the corner, and the report stunned the people. An indictment by the Istanbul Chief Prosecutor later deemed it to be a fictitious narrative, made up with the goal of harming others. According to Erdogan’s party leaders, even if they could have murdered the president’s daughter, they would have done so even if it was later shown to be a hoax.

Another Assassination plot came in 2015. After a report was made public by the Police Enforcement Agency, Erdogan was informed by Turkey’s intelligence chief in 2015 that members of the Gulen movement were plotting to assassinate him while he was in the hospital. According to the report, which was based on the informant allegations, Hakan Fidan, the head of the Intelligence rushed to the hospital to warn the Erdogan.

Allegedly, the failed coup attempt in 2016 coincided with an assassination attempt on Erdogan while he was on vacation. The Turkish president has often said that if he had been 15 minutes late for the jet, the plotters who were searching would have killed him. There were no assassination scenarios in these three stories, but they were used as part of the rallying around the leadership to garner the support the president and his family.

The Nagorno-Karabakh War gave Turkey historical influence in the South Caucasus, allowing it to assist Aliyev, Azerbaijan’s president. A historical narrative claiming Turkey helped Azerbaijan obtain independence and free Baku in 2018 was crafted by Turkish officials. Baku was freed by Islamic Army of the Caucasus under the command of 29-year-old Nuri Pasha Killigil, who had been sent by the Ottoman Enver Pasha. As it did in 1918, Turkey’s Islamic Party, AKP, revived this narrative and instilled in it a sense of solidarity with its Muslim and kin brothers. Also, Turkey was portrayed itself as Azerbaijan’s natural and historical guardian. As part of the rally around the flag, Azerbaijani and Turkish flags were used to represent the idea of two countries, one people.

During the Nagorno-Karabakh war in 2021, Turkish and Israeli unmanned aerial vehicles and Turkish military advisors played an important role in the operational planning and leadership of Azerbaijan’s military. While such hard politics were being made, the politicized soft power mechanisms were also tried. For example, the Turkish and Azeri diaspora abroad protested Armenia and sent messages of brotherly solidarity. They were successful in their campaign to promote unity and fraternity among the two nations and the one people they belong to. As a result, Azerbaijanis restored Aliyev’s image at home and acclaimed Erdogan as a Muslim leader. Others see it as a game of politics of, “you scratch my back, I scratch your back,” in which everyone benefits. Turkey’s Diyannet (Religious Affairs) to parliamentarians and businessmen visited Susha, a historical and cultural city taken back from Armenia after Azerbaijani forces seized the region of Nagorno Karabakh from Armenia. The city was nominated as a cultural city by the Turkic State Council.

The self-inflicted crises involving the Turkish president are discussed, consequently, he often uses rallies around the flag receiving with outstanding ovations by party members and not approved by the majority of population. According to our survey, Recep Tayyip Erdogan used the rally around flag effect in more than a dozen but we gave you 3 main examples. The Justice and Development Party has used “rally around the flag” when the president’s popularity or the legitimacy of his power has been called into question.

Alkan, A (2022). Does Turkey’s president Erdogan benefit from the “rally around the flag effect”? Politurco.com