Dubai to Japan for Turkish key into Lebanon 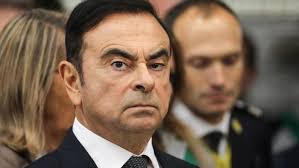 It’s dateline Tokyo, Istanbul, Beirut. The name Carlos makes headlines. The story is all about a narrative of a daredevil-like escape plot through the highest security check points on earth—the airports.

It is mission accomplished with, by and for Brazilian-born Frenchman of Lebanese origin, former Renault and Nissan chairman, Carlos Ghosn, after successfully jumping (and forsaking?) a Japanese court cash bail of one billion Yen equivalent to $9.2million.

Interpol issues a “red notice” requesting the police across the world to provisionally arrest him pending extradition, surrender or similar legal action. The story evolves into a real thriller. The media cash on it. The speed is so fast that some media houses fail to handle it professionally.

Paris pokes its nose in, planting further confusion into the memories of unsuspecting seasoned enthusiasts of adventure stories, films and the like. They know the Carlos, who could hatch the kind of plot, is Venezuelan-born Carlos the Jackal. This man, whose real name is Ilich Ramirez Sanchez, has been serving three life jail terms in France since 1994 for committing 16 murders.

The Carlos they know is that accused person who married his lawyer!  The man, whose mention puts intelligence officers in many countries on the alert.  The person, whom even Lucifer would not risk welcoming in his kingdom off hell. That committed Marxist-Leninist, who is recorded as one of the most notorious terrorists of his day; feared by Cuba, Israel and therefore the US, Libya and Syria alike. Has he escaped? Indeed, too many cooks spoil the broth.

All the same, the story unfolds until the real Carlos of the story finally lands in Beirut, Lebanon, his country of origin. The escape route encompasses unspecified estimated departure time from Osaka – not Tokyo where he was detained pending trial– Istanbul (Turkey transit) and then on to Beirut – destination Lebanon.

To Japanese Justice Minister Masako Mori, “it (the escape) was a breach of faith that can’t be explained to our children.” For those who love poetry, it could as well sound like the Ghosn ghost Osaka-Beirut flight. Call Ghosn fugitive, if you like, but Minister Mori finds herself at a loss as to how one could plot fleeing the country “without showing a passport…”

Mori is troubled by how Ghosn “was looking to justify his unlawful exit from Japan by propagating a false recognition of our justice system.” Anybody in her shoes could feel uncomfortably the same. Just imagine. Come April, this year, she is set to play host to the United Nations Congress on Crime Prevention and Criminal Justice, which takes place only once in five years.

Then, speaking for the first time since he fled Japan, Ghosn claims from Beirut in Lebanon that he had been treated “brutally” by Tokyo prosecutors, who interrogated him for up to eight hours a day in the absence of a lawyer, besides trying to extract a confession out of him.  And upon arrival in Lebanon at the completion of his mission, he said “I have not fled justice … I have escaped injustice and political persecution.”

In an earlier statement, he had said he would “no longer be held hostage by a rigged Japanese justice system where guilt is presumed and discrimination is rampant.” This does not augur well for a country looking forward to hosting a global congress addressing crime prevention and criminal justice.

Many theories and versions of the escape have been advanced. The world expected that Carlos Ghosn would let the cat out of the bag during his first public appearing at a press conference in Beirut. This did not happen. Instead, he said his priority was to clear his name.

But the bottom line of the story is that he jumped the bail. He flew from Osaka’s Kansai Airport – not Tokyo– landing at Ataturk Airport in Istanbul and on to Beirut.

His escape raises more questions than answers. He claims to have plotted it without the help of his wife. That is fine. How about her knowledge? If she did not know, what information did she avail to authorities about her husband under very close government surveillance who left home at around noon and never to come back?

It is reported that a security footage taken by a 24-housurveillance camera captured Ghosn leaving his central Tokyo residence alone at about noon but did not show him coming back.

The option of hiding in a musical instrument case is not new. In 1983 there was an abortive joint Nigerian Government and Israeli Intelligence attempt to kidnap Umaru Dikko, former Nigerian Minister for Transport in the Sheu Shagari civilian government that was toppled by Maj.-Gen. Muhammadu Buhari from London to Lagos in a cage.  The difference this time would be that of a case of ‘self-kidnap’.

Furthermore, at what stage did Ghosn and the musical instrument case come into contact? This implies that Ghosn left home as a person and the Kansai airport as cargo. Cargoes have no passports. How can ‘Ghosn the cargo’ be blamed by the Japanese authorities for fleeing the country “without showing passport?”

Reports claim that his (estimated) time of departure from Kansai is not known. This leaves a lot to be desired. Given the type of aircraft used, the distance between the two destinations and the exact time of arrival at Ataturk, how do authorities fail to work back and establish the ETD?

There is something more than what meets the eye in the bookings. Turkish MNG Jet company said it leased two private jets. It believed the two were for two separate clients, one flying from Dubai to Osaka then on to Istanbul and another flying from Istanbul to Beirut. It had since discovered the planes were not leased for the named passengers but were instrumental in the Ghosn escape to Lebanon from Japan.

From Dubai there is practically nothing impossible when it comes to doing business. Maybe of interest to the common man is that once you are there, making a local telephone call is complimentary.

In the aviation world, it is practically only from Dubai that one can fly in style to a chosen destination and aboard an aircraft that suits one’s needs and in a swift and convenient manner.  Privacy is fully guaranteed, twenty four hours a week, with any requirements.

The question here is: Can one make a request for an under the radar flight in any part of the world from Dubai? Of course it is easy to partition or split a mission into any components without the player or players knowing their complementary roles. Could the seemingly different Dubai-Osaka-Istanbul and the Istanbul-Beirut flights have been part of the same plan?

What type of flight landed at Ataturk Airport in Istanbul worth parking in the hangar and another one leaving about 45 minutes later for Beirut?  Hangars are strictly used for protection from weather, direct sunlight and for maintenance, repair, manufacture, assembly and storage of aircraft.

MNG Jet says one of its employees has confirmed to have acted in his individual capacity without the knowledge and authorization of the management. The Government of Turkey took immediate action sending seven people to court over the incident.

Could this incident provide the vital clue? Could MNG Jet have fallen prey to international human smuggling traffickers?  There are definitely many destinations through which such operations could take place. What made Turkey the ideal choice?