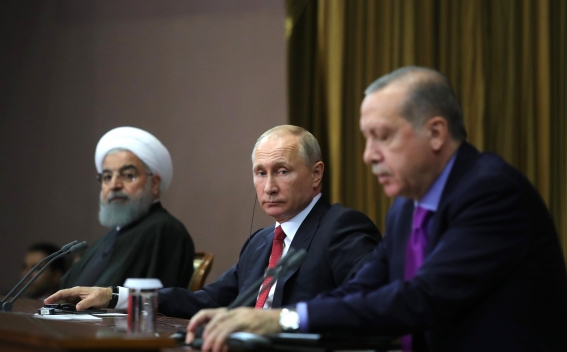 Turkey has been wending its way to being in cultural, political, and social relations with the western countries including the US throughout a century old history of its republic. Turkey, which joined League of Nations in 1932 and NATO in 1952, applied for a membership in 1959 to European Economic Community, which was the first stage of today’s European Union. With the NATO membership, Turkey fell under the influence of the United States of America and European countries altogether with its military structure, ammunition, education, human resources, and economic structure. Turkey, which chose to be on the West Block side during the bipolar world polarization after World War II, adapted foreign policies in line with the NATO. After the disintegration of the Soviet Union in the beginning of the 1990s, Turkey prioritized getting closer to Iran, Russia, and China because of the sharp breaks in domestic policies, and the Western countries changing their manner of approaching towards their allies.

As a matter of fact, while Turkey had Europe and the US in one side for foreign relations due to its geopolitical structure, it always had Middle East and Caucasus-Middle Asia line as an interest point. The historical link, cultural reasons, and trade relations were the natural reasons for this interest. The relations centered on energy and economy, which were at a certain level during the Soviet Union era, had an increase with Russia after the 1990s when Cold War ended. And for the past five years, since the Turkish politicians started suffering from political depression and painted themselves into a corner, the real motive turned into a form where Moscow and Ankara started talking about their own regional politics, Russia-Iran-Turkey trio started meeting in summits, common decisions to be taken about the Syrian crisis, and bargaining became available about the S-400 missile systems. This situation raised the following question: Is Turkey changing its strategic partners?

Even though there were changes about the defense and strategy comprehension of the West globally, there is a prevailing visibility that Turkey should not be in the opposite bloc (the Eastern bloc). And in Turkey, the discourses of the political leaders drive forward national interests, however, there is contradictory and antithetic reflex towards foreign policies due to the survival concern of the leaders in reality. Turkey, which was taking action with “Zero problems with the neighbors” slogan once upon a time, this reflex must be one of the reasons for Turkey not being able to be successful because of the incidents in the Middle East, and nearly wear away any neighbors which do not have any problems.

The incidents in Middle East did not happen as Turkey expected. In terms of Ankara’s perspective, the incidents went out of control, and turned into a mess. By time, more and more countries were involved. In addition to all of these, Crimea and Ukraine incidents happened which was approached sensitively due to the Tatar people living in Turkey and the public opinion. Ankara responded with a similar reflex to the tension between Russia and Ukraine. Turkey made statements as a member of the East bloc sometimes, and sometimes as a member of the West bloc. Just like Giep Prostakov, a Russian journalist, stated in his article in January, Byzantine diplomacy started by Ankara with pragmatic approaches against two big countries of the Slavs, who were experiencing a great tension in between.

While Ankara was negotiating about the S-400s or the TurkStream with Moscow, President Erdogan signed a sales contract with Ukraine for the UAVs, which are basically produced by the people who are his relatives. During a visit to the port city Odessa, Foreign Minister Mevlut Cavusoglu promised support by stating “the purpose was to help Ukraine’s military equipment ” . While Ankara allowed the moderate commissions to visit Moscow in order for the recognition of Crimea, Ankara talked pedantically that it will not “recognize the annexation of Crimea”. Within his same article, Glep Prostakov also mentioned that Fener Greek Patriarch recognized the independence of the Ukrainian Church. He comments “apparently the independence of the Ukraine Patriarch is impossible with Ankara getting involved”.

Recently, President Erdogan is making Russian indexed statements about Syria and Middle East. However, he also knows the limits of alliance with Russia. For this reason, in order to maintain balance with his supporters for domestic policies, and the foreign policies also, he continues he maintains close contact with Ukraine by aiming to keep Russia at a certain point. While the trading volume had reached a maximum of 7 billion dollars with Ukraine after it was separated from he Soviet Union (and this number consist 65% of imported goods from Ukraine), there seems to be no other reason for Erdogan to keep demonstrating the close contact with Kiev.

At the same time, the Ankara-Washington relations, which are going through the toughest period of the history of the republic, after the US President Trump started the signals for renegotiations with his withdrawal decision from Syria, Moscow started to make noise about “Erdogan’s omnipresent secret agenda”.While the discussions were ongoing during the first week of February between Turkey and the US about Syria, one US official gave a clear message about Turkey’s decision towards buying S-400 from Russia by stating “Turkey cannot buy Patriots if they buy S-400, the participation in the F-35 program will be in danger, and they might face US sanctions”. He further stated the following: “There are actually two options here, first one is the option where Turkey and the US will continue their military cooperation, Turkey will not danger its participation in F-35 program, and there won’t be any reason for Turkey to face sanctions. And the second option will not result in good outcomes. We hope that Turkey, which is a good friend and partner, will not chose a a way which will cause such problems.”

If the US turns the scale about the S-400s, a new crisis between Russia and Turkey relations will be inevitable. The supply of the S-400 is a matter of prestige for Russia now. Otherwise, disincentive precautions might step in. For example, similar incidents like the fighter jet crash of Russia, where the former Prime Minister Ahmet Davutoglu stated that he had gave the order, might be faced again. Similar footage and documents might come to surface just like Russian Today published the documentaries about Erdogan and his family aiding ISIS and similar groups. And there is always a possibility for Turkey to face sanctions in energy and other fields, and also Turkey being in a position where they won’t even be able to have any aircraft taking off in the southern borders.

During the Russia visit of President Erdogan last month, Russian Head of State Vladimir Putin surprisingly brought forward the 1998 Adana Agreement. The agreement was a guideline to the long termed “counter terrorism” for the relationship between Turkey and Syria. This important point in Putin’s statement might be an effort to start a dialogue between Turkey and Syria, and also avoid TSK (Turkish Armed Forces) to make a cross border operation into Syria. Russia was always pointing out Damascus to the Turkish delegates they have been meeting in order to have integrative results. And now, Russia is even trying to establish a serious coordination. And eventually Turkey started taking concrete steps about it. Before the Moscow summit, first the Foreign Minister Mevlut Cavusoglu stated “We have indirect contact with the regime” and “Generally the messages are being forwarded and received over Iran or Russia whenever something happens”. Afterwards, President Erdogan’s words “We are carrying out a low level politics with Syria” were acknowledged like Turkey has taken Vladimir Putin’s reminder for the Adana Agreement into consideration, which was signed 21 years go between Turkey and Syria.
However, Ankara, which demonstrates such an alliance with Moscow, is able to do a different bargain with Washington about Syria. The sources who soaked to Asharq Al-Awsat newspaper, which is published in Arabic in London, England’s capital, explained that the US and Turkey agreed on a secure one in Syria. With the news titled “Washington approved Turkey’s secure zone”, the newspaper published that US will continue military operations in in El Tanf near the Iraqi-Syrian border.

Turkey is taking fast steps towards being the main front country of the Second Cold War. A government, which questions the Treaty of Lausanne and adapts more and more the mentality of the Committee of Union and Progress or Enver Pasha must be made up of history repeating itself. Just like a Russian caricaturist drew, President Erdogan will drop one of the watermelons under his arm. Then only then the alarm rings will start to ring for the regime which is being tried to be established in Turkey. If Turkey backs Russia, the US will take precautions. If they back the US, then Russia will intervene Ankara. In short, as far as Russia is concerned, Moscow is very well aware of the “Byzantine diplomacy” played in Ankara.