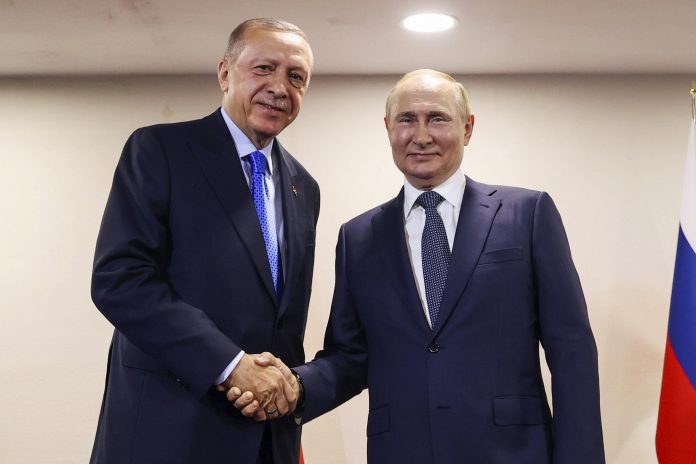 In Africa there is an indigenous observation that says: “Bashangaana anyanga”, literally translated, “they meet at the cemetery”. The main purpose of this wise and searching proverbial saying is twofold. First, to tease one’s brain on who are they whose rendezvous is the cemetery?  The dead?  Funeral undertakers maybe? Or the mourners?   Second, why? What is their mission? Could it be joint or separate? What is their connection, if any?

From the African cultural perspective, this wise saying connotes, but does not explicitly mention the witch, their practices, their impact on society and consequences.  Everything here is implied. Mutual distrust, self and competing interests, neglect for others. It’s hypocrisy at its best (worst?). It revolves on the axis of a big family, society, country, regional and global risk.

Monitoring and tracking life-in-denial typical of autocrats by using Turkey President Recep Tayyip Erdogan and his Russian Federation counterpart Vladimir Putin as keywords, rings in the African “Bashangaana anyanga”, experience as the duo ‘meet at the cemetery’ from domestic to the globe levels, putting almost everything at risk.

In the very immediate past, is very good news for a Turkish contractor and troubled Lira that Russian energy parastatal Rosatom has transferred $5billion to the $20billion Akkuyu nuclear power plant project, the world’s biggest construction site of that kind providing employment to around 20,000 Russian and Turkish workers.  Before long, the project story changes into the “Bashangaana anyanga”, narrative as Rosatom terminates the Turkish contractor in favour of the Russian, making Erdogan and Putin interests ‘meet at the cemetery’. This crucial energy project for Turkey is put at risk at least in the time to completion. That is, other things remaining equal.

Hot in the news is the war in Ukraine following the Russian invasion.  In this ‘cemetery’ witch Erdogan and Putin find themselves coming face to face to undertake regional peace and security on top of global hunger issues to which they have become part and parcel. In this ‘cemetery’ Putin is the aggressor. Erdogan is the provider of drones with which Ukraine fights the aggressor and a friend of both.  He offers to take a leading mediation role. With United Nations brokerage, talks held in Istanbul over six weeks finally deliver goods, allowing Ukrainian grain exports to resume.

Despite the unending war, the Istanbul ‘cemetery’ talks also deliver to Erdogan and Putin. While ‘witch’ Erdogan star, as we say in Africa, shines more, ‘witch’ Putin stands to gain because the resumption of grain exports from Odessa in Ukraine do not discriminate against Russian grains and fertilizers. This means a lot for Putin in the circumstances of global sanctions occasioned by the very Ukraine war.

If anything, Russia’s invasion of Ukraine has attracted Erdogan and Putin onto the NATO and Western allies ‘cemetery’ with the former, being a member, and the latter posing as a real big threat. Again on this ‘site’, Erdogan perches himself dangerously in between, but playing it safe with acquiring Putin’s S-400 sophisticated air missiles.

To retain Putin’s friendship and fulfil personal interest, he blocked Finland’s and Sweden’s joint application for NATO membership and demanded a pound of flesh in The Merchant of Venice style from both countries to extradite to Turkey a listed number of people in asylum he designates as ‘terrorists’.

On the heels of the Odessa “safe grain corridor” deliverable, Erdogan and Putin move to the Sochi ‘’witch cemetery meeting”, where they agree and agree to disagree on various mutual tensions, retaining a safe distance between them.

Without much debate, Syria remains the hottest site where “Bashangaana anyanga”, “they (Erdogan and Putin) meet at the cemetery” in conjunction with Iran.  In the Syrian conflict, Russia (Putin) and Turkey (Erdogan) have been adversaries with Erdogan fighting for the fall of President Bashar al-Assad and Putin for his continued stay on the throne.

The last session really attested to the “witch meeting at the cemetery”. Beleaguered with domestic economy problems, the three rose with ways through which they can trade with one another using their own currencies. The three must be more interested in going around sanctions than the Syrian peace. Charity begins at home.

Erdogan, however, left unhappy on his plans to hit PYG targets in north Syria. Iran had already condemned the plan as disastrous to the region.  But, with or without the blessing, Erdogan will, very probably, go ahead with the plans and later, as usual, find ways of mending the walls.

A statement issued after the meeting is vague enough for him. It says: “Noting the importance they attach to the protection of Syria’s political unity and territorial integrity, the leaders reaffirmed their determination to act in solidarity and cooperation in the fight against terrorist organizations in Syria”. In the circumstances of confirmed confessions of Erdogan sending arms to Syria for ISIS to fight against Al-Assad, which “terrorist organizations” do they targeted? Those assisted by Erdogan? To say the least, the Syria conflict “Astana Peace Process”, which the world has left in the hands of Turkey, Iran and Russia, appear just as one of those “they meet at the cemetery” African indigenous knowledge concepts.

Along the lines of the Syrian crisis, Libya just automatically slips into the “Bashangaana anyanga” category, whereby Erdogan tactfully supports the United Nations recognized unity government while Putin stands for eastern Libya Marshal Khalifa Hafter.  Of late, Erdogan has tried to make advances on the Marshal for a political solution. How does Putin take this development? On top of that, there are threats of the Nagomo-Karabakh conflict in which Putin and Erdogan supported adversaries. Could this be another “they meet at the cemetery” occasion in the making?

One can continue digging into current affairs rubble, unearthing one “they meet at the cemetery” incidents after another, using Turkey and Russia as keywords, until the troubled Lira changes at par with the Ruble as Putin intensifies his plans for more power in Central Asia while Erdogan fights tooth-and-nail to maintain his influence.

To be or not to be, has the world, the people of Turkey (heading to presidential and parliamentary elections) and the Russian Federation understand the risk at hand from the Erdogan-Putin “they meet at the cemetery” life-in-denial style which is all about hypocrisy and personal gains? That is the question.