HomeExpertsErdogan: The making of a global Monster?
ExpertsTop Stories On Turkey

Erdogan: The making of a global Monster? 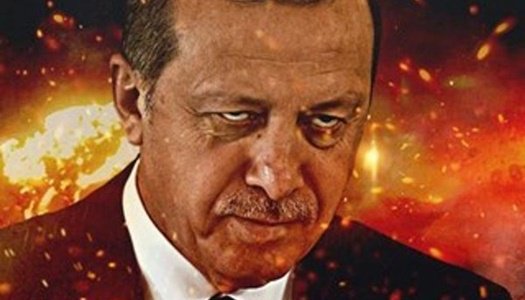 It’s a terrible Monday, July 5, 2021. Ten days to the fifth anniversary of the yet-to-be-deciphered and fully explained Turkish coup. Very sad news arrives on my desk. In the process, my brain storms: “Who is this Erdogan that the whole world should now take for a global monster in the making or actually already made?” How did I come to that?

My attention is attracted by a photograph of a kind of a deserted lady in casual wear.  In my part of the world, the sight looks like one of brochure distributors. But she is alone and no passers-by. The situation is not normal.

I learn it is a photograph of the wife of kidnapped president and founder of Sapat schools in Kyrgyzstan, Reyhan Inandi. My mind opens up. She is in a lone protest in front of President Sadyr Japarova Palace for locating her husband, Orhan Inandi.

She is quoted by the media as tweeting after launching her protest: “As of today, I am beginning my justice watch. May God help me. May all those who have gone missing be found.  I refer to all tyrants and their cronies to God.” That is a strong prayer.

I am surprised. In our local circumstances the sight is unfamiliar. It is unusual. She could not have managed to come that close to the Presidential Palace without being confronted by the police and facing consequences, including possible arrest.

Reading further, I learn that her plan was to carry out that exercise on a one-hour-a-day basis and her ammunition was simply a placard. I also learn that President Japarova’s wife, Aigul, did the same when her husband was in prison from where he came back to freedom and win an election to the Palace.

God hears and responds to her prayer. On the same day President Erdogan acknowledges that Inandi was actually abducted by the Turkey National Intelligence Organization (MIT). He was quoted as saying after a Cabinet meeting: “MIT, through genuine and patient work, brought the FETO member in charge of Central Asia, Orhan Inandi, back to Turkey.”  From this I remembered the tale of an African child who tells a parent arriving from work: “I have not broken the tumbler.” It’s all from guilty conscience.  What can be genuine about abductions on foreign land for that matter?

A chilling and hair raising photograph of Inandi greets me. He is completely humiliated in hidden handcuffs, standing between two flags of Turkey. For what? Why the hiding? The regime knows better.

But Erdogan even goes ahead to repeat a hate vow that the government will ensure that Gulen movement members will find no safe haven wherever they go. As chairman to a committee that coordinates MIT’s overseas operations, he is sure of what he is saying.

For anyone who has been following this case, here is a big lie on the side of Erdogan. Initially he had responded to Japarov that he did not know Inandi, had no knowledge of the matter and did not want to hear anything about FETO supporters.  But a total of 24 news agencies had reported about the incident and subsequent protests mounted in some European and U.S. capitals. However, during Japarov’s visit to Ankara, the story changed to that he had no idea of the whereabouts of Inandi.

Japarov on one side, is inconsiderate. On the other, he is not true even to himself. His government knew what was going on. How did the MIT operatives arrive in the country? There were public demonstrations and people keeping vigil at the Turkish embassy in the Bishkek capital after the kidnapping. Where did the MIT park their aircraft for facilitating this crime, which is also against Kyrgyzstan state sovereignty?

Inandi is a Turkish-Kyrgyz citizen. The president knew exactly what was going to happen to him but could not turn down Erdogan’s request. He needs Erdogan’s support in his border conflict with Tajikistan. And Erdogan is an expert on this. A close example is his role in the Azerbaijan-Armenia conflict.

Could this paint the picture of the Inandi wife’s prayer?  Who is the tyrant? Who is the crony? The perpetrators she refers to God.

This is where the words of Agathe Demarais, forecasting director at the Economics Intelligence Unit come to light. Namely that, the U.S. and Europe have become “increasingly frustrated by Erdogan’s emboldened foreign interventions and erratic behavior towards allies and adversaries.”

A quick scan of what Agathe had to say reveals Erdogan, a big ally of the West within member countries of the North Atlantic Treaty Organization (NATO), going out to acquire the sophisticated S-400 air missiles from Russia. And he still expects to be friends with the U.S. and other members. through claiming that the system will not be integrated in NATO but does not elaborate how.

In May this year, the EU Parliament decided to call for termination of membership talks with Turkey because of the country’s incompatibility with the European leaders’ announced “positive agenda” Member of the Dutch Parliament, Kati Piri, may have put it better by demanding improvement in Turkey’s democracy as a condition for meeting the country’s request for further trade ties. Here we have a country that has withdrawn from the Istanbul Convention, and continues to jail members of the opposition.

Erdogan has created a lot of mess in the Syria and Libya crises.  Under the guise of fighting terrorism, he has emerged with other agendas bordering on energy, trade and investment. Together with the U.S. he ‘fought’ terrorists in Syria. However, a big scandal emerged when the so- called MIT meat trucks were discovered to have a consignment of arms for rebels. Erdogan himself ordered investigations and their closure.

Erdogan has been linked with terror groups in Africa and mercenary recruitment in Syria itself, Libya and Azerbaijan. The U.S. has officially put Turkey on the list of countries implicated in the use of child soldiers.

On the home scene, Erdogan came to power in 2002 on the ticket of fighting corruption, poverty and prohibition – tagged 3Ys — respectively known as Yolsuziuk, Yoksulluk and Yasakkar to the electorate. Today, he is thousands of kilometres away from the promise.

Turkish children are profiled from junior grades with ulterior motives. People’s livelihoods (COVID-19) notwithstanding, are lower than what they were five years ago.

Corruption is still flourishing, putting on national and global cloaks. For example, out of 294 foundations enjoying tax exemptions since 2002, a total of 105 are close to the ruling Justice and Development Party (AKP). These include the Turkey Youth Foundation on whose board sits the president’s son, Bilal Erdogan, and Service for Youth & Education linked to the daughter of former Finance Minister Esra Albayrak.

Today, Turkey is the land of a Penal Code devoid of definitions of what constitutes a criminal offence. This leads to judicial harassment due to shot-in-the-dark, politically inspired investigations, prosecutions and convictions and prison sentences.

And this is where opposition and perceived members of the Gulen Movement find it really going rough in Turkey and abroad. Erdogan has confirmed that more than 100 members have been rendered to Turkey from various countries.

Freedom House on transnational repression in a recent report revealed that Turkey has become   number one among countries that have conducted renditions from host countries since 2014. According to official information, 622,646 people have been investigated upon, 30,932 detained, 96,000 others jailed. More than 30,000 civil servants have been sacked.

Following Erdogan’s confirmation of Inandi rendition to Turkey, the Freedom House Director of Research Strategy, Nate Schenkkan, said the AKP government was engaged in an overt, unapologetic, international kidnapping campaign.”

The world cannot keep quiet on this. Such an operation cannot take place without the blessing of the host governments’ and involvement of the countries’ intelligence systems. Where are international laws? Erdogan is becoming a world monster. How far should he be left to go? He is menace.

Action must also be considered for host countries which collude with him. Time cannot be left to save the people of Turkey and the rest of the world from Erdogan. As we say in Africa bad meet on a roast stick takes a long time to depletion.

Reyhan is right. Tyrants and their cronies must not be given any chance. But Erdogan, with impunity, says Gulen movement members will find no safe haven wherever they go. Should the world keep quiet? No. It should take action. It should be on a justice watch against such people and their actions.