HomeExpertsErdogan trapped in ‘bush washroom’ but…
ExpertsTop Stories On Turkey

Erdogan trapped in ‘bush washroom’ but… 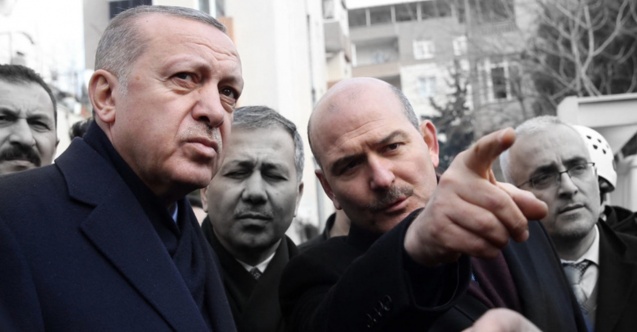 African indigenous knowledge, famed (IK) in World Bank publications for enhancing borrower government accountability, has it that it is the twig which you suppress under your foot when helping yourself in the bush that eventually splashes feces at you.

Isn’t this one way we could look at what is happening in Turkey today along mafia boss, Sedat Peker online allegations and accusations against his professed “Brother Tayyip”? Could Sedat be the twig in the African ‘bush washroom’ for President Erdogan? Where does Erdogan hide his face from what his ‘close and self-styled young brother’ has to say about him and the ruling AKP party?

With due consideration, Sedat Peker online revelations  –if they are revelations at all because they address much of the already known Turkey ‘dirty’ past — are pecking holes in the Erdogan-AKP trunk. No doubt about that. The problem with them is: “What effect or impact are they likely to have on the ground in Turkey, and, above the ground, in the rest of the world?” For, likened to a tree, Erdogan and AKP can still survive so long as their roots remain intact. Wood peckers aside, many trees still very happily survive in the African jungle.

What likelihood do Peker revelations have of changing the people’s life in Turkey and the world at large for the better?  They cannot deliver anything if they don’t make Erdogan and his ruling AKP ranks see themselves like leaving the African ‘bush wash room’ with the Sedat Peker splashes and do away with the accompanying shame. This they are not ready to do. They want power. The rest must wait.

Turkey (Erdogan-AKP) presence at home and outside is ambivalent. Putting the home story in the pending tray, outside the Turkish borders, Cyprus is currently the hotspot and that is not all?

Look at what the Turkey regime has done in neighbouring Syria, Iran and Iraq. Look at what Turkey has done in the Mediterranean region? Libya is the typical case, the Aegean story let alone. Look at what is happening to the Arab world in Egypt, Qatar and the UAE.

Erdogan has fingers in the Israel-Palestine crisis. He has a hand in the Armenia-Azerbaijan conflict. Neither the Russians nor the Americans are at peace with him as a NATO ally keeping U.S. and Soviet sophisticated weapons side by side. Beijing has a bone to pick with Ankara as well over the Muslim minority issue in China.

Erdogan has not even spared sub-Saharan Africa, crossing the desert to exert pressure on countries in the East, Central and Southern Africa and the Great Lakes regions.  Even in my peaceful country, Tanzania, thousands of kilometers from the Palace, he has attempted to deny children chances of addressing one of the country’s three major enemies – ignorance. The others are poverty and disease.  Erdogan has tried to pressurize the government to close quality education delivery schools because they are linked to the Gulen Movement.

Don’t take me for an ally of Sedat. Far from it; it is befitting to read between what Sedat says, official reaction from Erdogan and his regime executives, if any, and what is on stage from other parts of the world. Then only can we venture into understanding even a little bit about the online Sedat tales about “Brother Tayyip” and his government emanating from Dubai, where he lives in exile.

My first observation is, here we have a regime that has done everything to dismantle anything that synchronizes with democracy. The conventional three pillars — the judiciary, legislative and executive – have since been dismantled and lost their independence. The fourth pillar – the media – could be anybody’s guess after businesses being taken over by the government and or handed over to associates. In one sentence, one can say there is no justice worth the name in Turkey, where ethical prosecutors, judges and journalists have their bad time in jail or live in exile.

How come that now the same government allows the so-called strong accusations against it and ruling Justice and Development (AKP) party to be accessed by the Turkish people in their millions on social media? There have been cases where access to even an individual news item has been restricted by local authorities. What has gone right?

The difference between Erdogan and Peker must be flesh not bone deep. And Erdogan, in my assessment, is better placed to accommodate Peker’s ‘musings’ and respond to them at will. That is, if he is not part of the campaign. Why?

The 2023 presidential polls are around the corner. In the Erdogan style, one cannot rule out early elections. But the situation on the ground is hot. Definitely not all AKP members are pro-Erdogan. If they were, there would be no need of a “deep state”.

In the beginning, Erdogan was seen as a model for building democracy in Turkey.  The Erdogan of that time is not the one ruling Turkey. Today’s Erdogan has executive presidential powers which he has used and is still using to ‘execute’ or ‘terminate’ all personal freedoms and ‘persecute’ all who stand by the Constitution whose provisions he took oath to uphold. Erdogan is the Constitution! That is the problem of Turkey, with or without the likes of Peker allegations.

Erdogan is definitely not as strong as he was in the past. This he knows very well and, hopefully, his self-professed ‘young brother’ Peker. The point at issue is to weaken the opposition.  Everybody in Turkey knows that he who rules Istanbul rules Turkey.  Istanbul is in the hands of the opposition.

Last week, Turkish prosecutors sought a prison sentence of up to four years for the mayor of Istanbul for “insulting election authorities”. Ekrem Imamoglu of the main opposition Republican People’s Party won re-run elections in June 2019. An earlier election was cancelled over allegations of fraud by the ruling AKP. Imamoglu is claimed to have insulted members of the Supreme Election Board in a speech he delivered after the cancellation of the first round of elections in March 2019. This is 2021, more than two years ago.

What should we read between the lines? While the residents of Istanbul, Turkey’s biggest city were busy listening to Peker’s allegations, the government was cementing its way to send Imamoglu to prison until 2025. That is after the elections. If what is said in Turkey is true, why should Imamoglu not beat Erdogan in the 2023 polls? So, the best way is to have him in prison during the polls.

The 2019 victory of Imamoglu was described in some Turkish circles as a vote win for democracy and a blow to personal efforts of President Erdogan which were seen as to have backfired. A repeat of this kind is worse than listening to Peker’s allegations. The polls turnout was about 85% and final results put Imamoglu win at 54.21% of 10.5 million vote cast against AKP’s Binali Yildirim’s 44.99%.

After winning the seat, state banks denied him support for infrastructure development projects as AKP tried to keep grip on money raised before Imamoglu came to power. The banks are protected by a Sovereign Wealth Fund  chaired by the Turkish Government President and (by then) his son in law as Finance Minister, Berat Albayrak, also a target of Peker.

Imamoglu was forced to go to Berlin, London and Paris where he secured   a Euros 110 million promise from the Deutsche Bank and Euros 86 million from the French Development Agency. Interior Minister Suleyman Soylu, also the man at the centre of Peker allegations, called him a “fool” and said that he would pay for criticizing the Turkish Government during his trip.

Turkey no longer possesses good governance infrastructure.  There are no ethical prosecutors and judges. Investigative journalism is gone. State-owned Anadolu agency reporter was last week sacked for asking what was called an “awkward” question about alleged connections between mafia and the government. The next we are likely to hear about him is being charged with membership of a terrorist organization.

Erdogan and fellow executives have had their share of the African ‘bush washroom’. But the Turkish people are worth better information packages than what Peker offers as they move towards the 2023 elections.   Peker cannot be pro-Turkey people; he has his own goals worth to be looked at with the sixth sense for the sake of the country. Here is a challenge for the world media. This is not the time to be swept by Peker.