Erdogan versus Gulen: What is next? 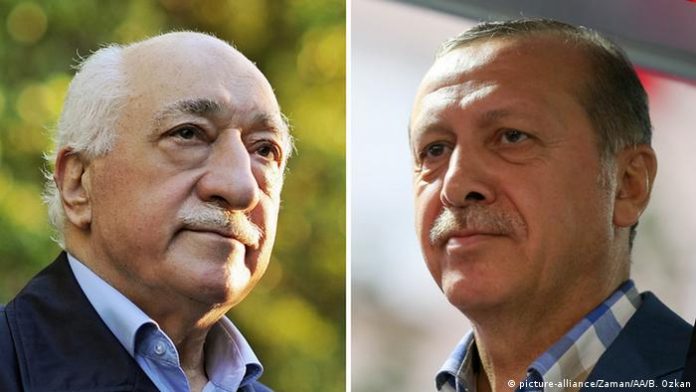 However much one may try, even for the most empathic, it is hard to know how much someone else is suffering. This is why the idiom: “Straight from the horse’s mouth” emerged among the Anglo-Saxons of the 15th century.   However, Africa indigenous knowledge, devoid of the horse-riding accompanying luxury experiences, but well conversant with the donkey life pattern, has the better version.  “Atakutwalilemu tamanya okw’osikilirwe – meaning, the person who is not giving you a helping hand cannot not know (appreciation let alone) how much you are burdened.

The whole world has heard of and read much about the set of sufferings inflicted upon the Turkish people – Fethullah Gulen-linked in particular – at home and abroad who are perceived as dissidents by the Erdogan and his ruling pseudonym Justice and Development Party (AKP). But the ugly, torturous side of it cannot be felt remotely. The feeling and the experience have to be first hand to send the real message across.

Indeed, “only the wearer knows where the shoe pinches” and as one idioms dictionary observes: “Only someone directly afflicted by some source of pain or unhappiness can truly experience it. Everyone else is only to sympathize…”

It is against this fact that, as a journalist, I envy educator, author and activist Engin Yigit, for literally putting Kemal Gulen –lawyer and journalist — on the carpet to enable the world know pains that the Erdogan regime has inflicted on the Fethullah Gulen kith and kin.  I don’t envy the Politurco house editors for having allowed the interview to just run on so that readers can get the first hand Gulen kin feeling of the Erdogan pain.

Similarly, I don’t know how many people took pains to read it all. Either way, it still makes sense to digest it for those who might have gone half or three quarters’ way for one reason or another. First and foremost, the headline squarely bears the story where it reads: “Kemal Gulen: 80 members of the Gulen family are in prison in Turkey”. How else could one expect the family to lament the afflicted Erdogan pain? Numbers say it better.

But is that all there is in the interview? Definitely not. Engin Yigit is teacher, author and activist. So, the question is: “What can be learned from his lecture, be noted from his paper and be adopted from his community advocacy quotients?

The first lesson is about the much-orchestrated July, 15, 2015 coup blamed on Turkish Muslim cleric Fethullah Gulen living in exile all the way in Pennsylvania in the United States. Was it a real coup or something planned?  A house job?  Is Erdogan a big liar?

In the interview, Kemal, Gulen’s nephew who fled to Canada, replies: “… After the July 15 incident, on the night connecting July 15 to 16, I was at home with my family. We were deeply worried due to the events and were thinking: ‘What will happen next?’

“Suddenly … neighbors phoned and said, ‘smoke’s is rising from your lawn’. It was 12 midnight. When we went downstairs, we saw the building had been set on fire from the first floor. Our residence was on the third floor.

“You may guess my condition back then.  We thought: ‘if we call the police and if they arrive, they will interrogate us, not the one who torched our place. It was such a situation that had we called the fire brigade, they could have simply shrugged and said, ‘OK, you’re right there! Burn on then’. This being the case we teamed with the kids and extinguished the fire by our own means, spraying it with garden hoses. We eventually realized we were no longer safe in our own house. I had to move to some place and my family to another safe place.

“When President Erdogan made a baseless and unwarranted claim right in the first minutes of the coup attempt without referring to any legitimate or judicial investigation saying ‘Members of such and such community carried out the coup attempt’ I was convinced they had pre-planned every part of that dastardly attempt. I mean who could turn so hostile to Kemal Gulen or anyone else within a single day for setting their house on fire? Clearly, the preparations had paved a psychological groundwork and the triggermen who would commit all those murders and crimes had also been indoctrinated and guided.

“While these are my opinions, it was later revealed …how the weapons had been distributed before the attempt among the perpetrators who had known about the coup beforehand and carried out preparations…”

The second lesson: What sort of person is Fethullah Gulen that his family members –however distant – even relatives of in-laws irrespective of their faith, gender, and age, should be targeted by the Erdogan regime wherever they are on earth?

An eye-opening question put to Kemal, in part, ran as follows: “… We have observed and know that Mr. Gulen has always been solemn about his relatives and has adopted a principled stance towards not favoring any of them. From this viewpoint, what would you like to say about Gulen’s relatives and his relations with them?”

Kemal replies: “…I may briefly tackle this under two headings. First, Hodjaefendi is very meticulous about these values commanded by our religion and advocated by humanity as ‘respecting the rights of kinship’. When it comes to the rights of kith and kin – for instance, our ancestors arrived in Erzurum from Ahlat two or three hundred years ago –Hodjaefendi always used to say, “Please go out and check if we have any of our relatives there?” I mean if there were people like grandchildren and great-grandchildren.

He used to say:” if there are some in need, host them, take care of them, and take care of their children” and in this respect, I have never seen someone who observed the rights of kin more than him. He puts forth an effort beyond all appreciation. He has always encouraged us. He used to say: “There are some who migrated to different cities in Turkey during the mobilizations ordered by World War I and World War II. Make sure to contact them. Maybe they need to keep in touch.”

Let me also point out, ‘meeting their needs’ does not mean ‘taking some money from an institution of the Hizmet Movement to them or registering plots or buildings in their names or doing this or that.’ Everyone is already standing on their own two feet. What this means was ‘allot some of your own means and establish contacts with such distant relatives. Let them get acquainted with the institutions of the Hizmet Movement and if they have children unable to attend any school let’s help them receive education. Let them grow up in the residences established by the Hizmet Movement and come forth as a generation with good morals.” This is how, besides all his commitments, he considered it a duty to take care of everyone.

Besides his relatives — he had for example siblings, six boys and two girls, none have been top ranked by the movement. Hodjaefendi has never adopted the way of gratifying his relatives through distribution of jobs positions or moneys.  In his own words he would say: “I am an Umari” who did not even recognize his grandson when it came to state affairs. He always kept his relatives away from state institutions. He introduced such an administrative system.

Likewise, Hodjaefendi facilitated his relatives’ religiously devotion and education by spending from his own money and there was never a thing like “induct these people to the Hizmet institutions and give them jobs”. He is this such meticulous. He used to say “Hizmet is so innocent and pure that it does not bear to carry even the slightest stain. Such an act casts a shadow on a Movement favoured by multitudes.”

In one sentence Kemal says of Gulen: “It is hard to show a second person who takes care of his relatives but keeps them away from preferences and nepotism.”

Why should a genuine government in power target such a person and his relatives?