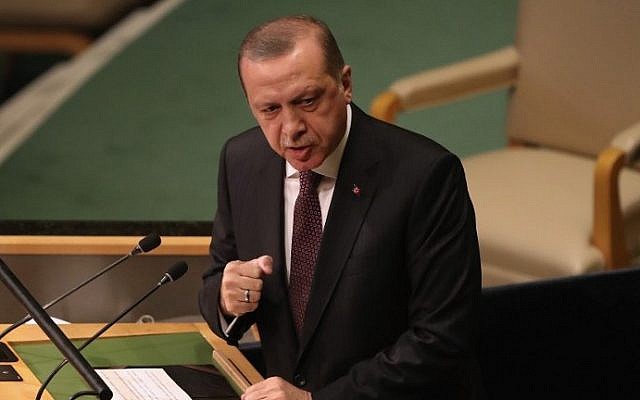 Turkey’s President Tayyip Erdogan is profoundly anti-semitic. His most recent rant against Israel and the Jewish people came in response to conditions by US National Security Adviser John Bolton on the US withdrawal of US troops from Syria. Erdogan accused Israel of master-minding US policy, saying that Bolton had made a “grave mistake” in setting a condition for the pullout of troops. According to Erdogan, “It is not possible for us to swallow the message Bolton gave from Israel.”

The following quotes are illustrative of Erdogan’s anti-semitism and vitriolic opposition to Israel.

“Erdogan lashed out at Israel. ‘The Jews in Israel kick people laying on the ground. In fact, Jews don’t kick men but also women and children when they fall on the ground,’ he told young Turks at an Istanbul meeting of the Turkey Youth Foundation.”

“As the events were unfolding [the Gezi park protests], the Turkish strongman alluded to a treacherous ‘interest-rate lobby’ working behind the scenes… It is no secret that Erdogan deplores interest rates, which he denounced earlier this year as ‘the mother and father of all evil.’ The president not only sees interest rates as a ‘tool of exploitation,’ comparing them to ‘heroin trade,’ but also insists that high interest rates lead to higher inflation. In Turkish Islamist thinking…interest rates are a tool employed by Jews to control world events.”

“He said that ‘as Muslims, we deal with people directly, and if there are people who are brave enough to provoke us, we will teach them a lesson.’…Erdogan also told the audience, ‘Don’t be like the Jews.’ A number of Turkish journalists tweeted that some in the crowd called out for Erdogan to bring about the Muslim reconquest of Jerusalem. Erdogan replied, ‘Soon, God willing.’”

“Erdogan tells Turkish youths: ‘Jews in Israel’ beat Palestinian women and children. ‘The Jews in Israel kick people laying on the ground. In fact, Jews don’t kick men but also women and children when they fall on the ground,’ he told young Turks at an Istanbul meeting of the Turkey Youth Foundation. ‘But as Muslims, we will confront these people [the Jews] if they have courage to deal with us and we’ll teach them a lesson,’ Erdogan added.”

“‘Today, the Palestinians are subjected to pressures, violence and intimidation policies no less grave than the oppression done to the Jews during WWII,’ he said at a conference on Jerusalem in Istanbul, according to a transcript of his speech posted to his website… ‘They are committing a cultural genocide there by usurping Muslims’ lands, businesses, residences and even houses of prayer.’”

“Erdogan named the body responsible for all of Turkey’s ills and difficulties – ‘The Mastermind.’ Several months later, Haber, a pro-government television channel, aired a documentary  also called ‘The Mastermind.’…With the help of pro-government academics, journalists and other cognoscenti, the documentary explains that Jewish machinations are as ancient as the story of Moses, the descendants of whom, Jews, have sought global dominance for 3,500 years. It was they who brought down the Ottoman Empire, forced the demise of Islamist governments, and continue to plot against Turkey, even manipulating the U.S. government. Since then, Erdogan has repeatedly mentioned ‘The Mastermind.’… Secret Jewish conspiracies are part in parcel of the ideology from the political environment from which Erdogan and the AKP emerged.”

Reuters, “Soros foundation to close in Turkey after attack by Erdogan”, Nov. 26, 2018, link to article.

“‘The person (Osman Kavala) who financed terrorists during the Gezi incidents is already in prison,’ Erdogan told a meeting of local administrators on Wednesday. ‘And who is behind him? The famous Hungarian Jew Soros. This is a man who assigns people to divide nations and shatter them. He has so much money and he spends it this way.’”

Stockholm Center for Freedom, “Turkish pro-Erdoğan columnist: The world has a Jewish problem”, May 18, 2018, link to article.

“Turkish President Recep Tayyip Erdoğan denounced the violence of the Israeli state against the Palestinians as well as the inability of the United Nations and the Muslim world in putting an end to the Palestine problem, during a mass rally today in İstanbul to support Jerusalem. ‘Jerusalem is not just a city, it is a symbol, test, qiblah. If we can’t protect our first qiblah, we can’t protect the future of last qiblah securely,’ Edoğan said, adding that the Islamic world had failed that test… Erdoğan accused the United Nations of tacitly supporting Israel’s ‘illegal and immoral’ attitude toward the Palestinians. ‘Do you understand now why I say the world is bigger than five? In a world that is at America’s beck and call, you cannot see anything other than tyranny,’ Erdoğan said.”

“‘[T]hose who think they own Jerusalem better know that tomorrow they won’t be able to hide behind trees,’ Erdogan said… ‘[This is] a veiled threat of killing each and every Jew with a shocking reference to apocalyptic prophecy of tree story,’ Bozkurt wrote. The full hadith says: ‘The last hour would not come unless the Muslims will fight against the Jews, and the Muslims would kill them until the Jews would hide themselves behind a stone or a tree and a stone or a tree would say: ‘Muslim, or the servant of Allah, there is a Jew behind me; come and kill him;’ but the tree Gharqad would not say, for it is the tree of the Jews.’”

“Erdogan’s worldview is profoundly anti-Semitic. Already back in 1974, he wrote, directed and played the lead role in the play ‘Mas-Kom-Ya’, which presented Freemasonry, Communism and Judaism as evil. To this day, Erdoğan’s muse is Necip Fazl Ksakürek whose ‘Büyük Doğu’ (‘Great East’) ideology was also the main inspiration for the foundation of the Islamist terror organization IBDA-C.’ Ksakürek was an anti-Semite and fierce enemy of secular Turkey. His publications include the Turkish translation of ‘The Protocols’ and praise for Henry Ford’s ‘The International Jew.’ He also wrote a political program: ‘With this commandment every measure is to be taken in order to bring the Turkish homeland to a state in which its only inhabitants are Muslims and Turks and to cleanse it from head to toe of traitors and darker forces. Chief among these treacherous and insidious elements to be cleansed are the Dönmes and the Jews.’”

“‘Why are you running away, Israeli spawn,’ using a word in Turkish that is considered a curse…Erdogan called out an anti-Israel slur when surrounded by protesters at the site of the mine blast that killed hundreds, local media has reported.”

“‘Just like Zionism, anti-Semitism and fascism, it becomes unavoidable that Islamophobia must be regarded as a crime against humanity,’ Erdogan said in his speech.

“Erdogan accused Israel in the interview of using the Holocaust to justify its acts against the Palestinians and to perpetuate the idea that ‘they are the victims all the time.’ He also said there were no accurate statistics about the number of Israelis killed in the conflict, suggesting up to ‘200’, while ‘hundreds of thousands of Palestinians were killed’ as a result of Israel’s attack on Gaza alone.”

An ally is a country with which the United States shares values, as well as security concerns. If Turkey applied to join NATO today, it would be rejected. Turkey is Islamist, anti-American, and against human rights. Moreover, Erdogan despises Israel and the United States. US officials should see Erdogan for who he is. No exception for this Jew-hating bigot.