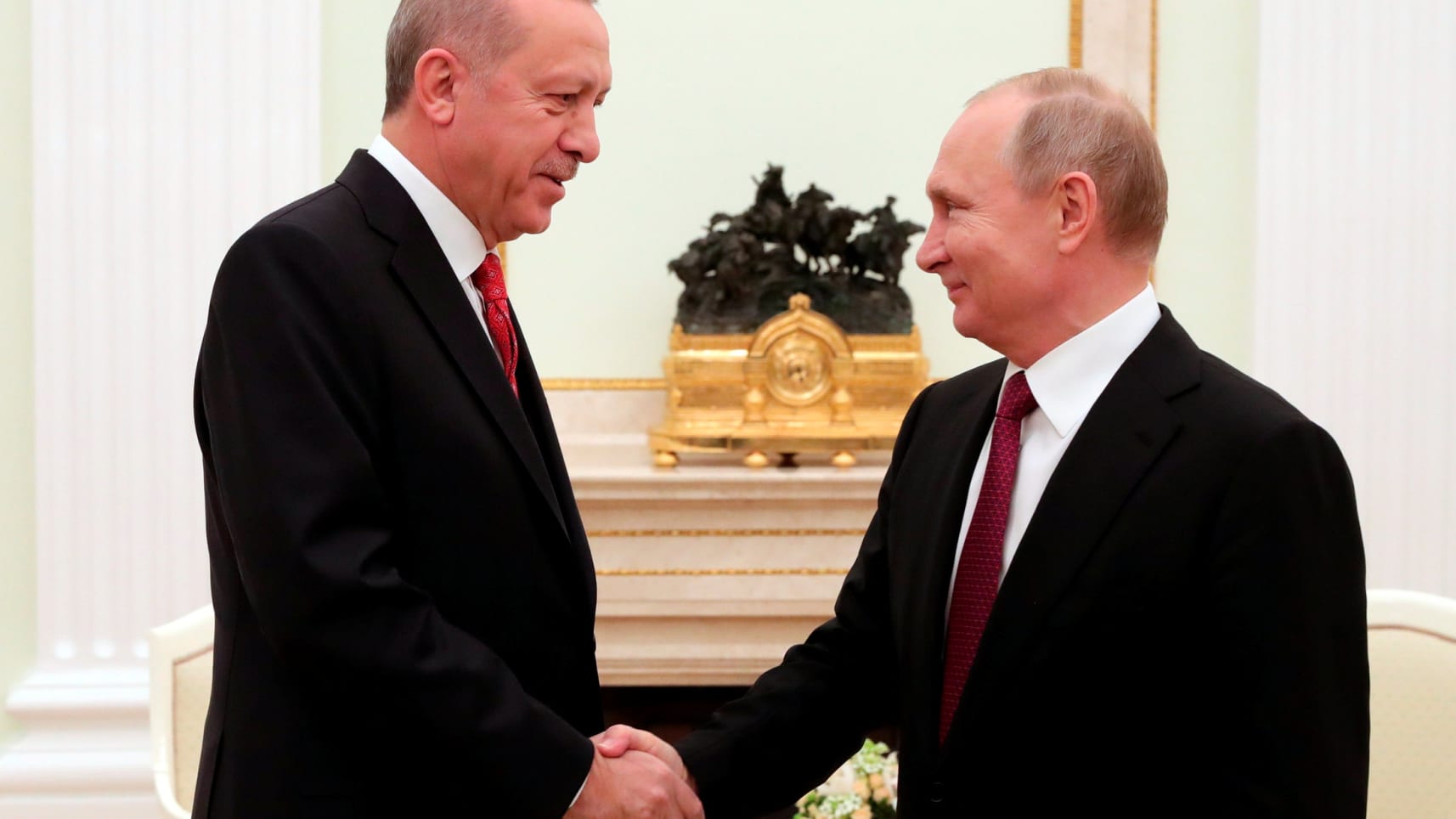 President Tayyip Erdogan held a one-day meeting with Russian President Vladimir Putin in Moscow on Tuesday. The main agenda of the Turkish delegation was the developments in the Syrian city of Idlib last week. As it is known, Damascus regime made raids on the Turkish observation points and convoys of TSK (Turkish Armed Forces) in İdlib, and there was another attempt to lay siege to the Turkey-backed opponents located in rural Hama which neighbors Khan Shaykhun. Such developments are quite worrisome for Turkey which has 1200 soldiers and observation points deployed in and around Idlib. Russian Foreign Minister Sergey Lavrov’s recent statements do not conceal the Russian support behind this mobility of the Damascus regime.

Just more than a week ago, Ankara was left disappointed after ending the talks with Washington about the safe zone. It turned out that the Pentagon shared all the information with PYD (Democratic Union Party) during the Safe Zone agreement process and agreed with them for the resolutions. Turkey was limited to a maximum of 8 km zone, where they had initially requested a depth up to 35 km.

In contrast with the attitude of Moscow about the safe zone, Russia feels uneasy due to Ankara’s intention to have a bargain with Washington and their escalating deployment on the region through Turkey instead of reducing their numbers. Russia emphasized on Syria’s sovereignty, independence, and integrity throughout all of the statements made in different environments for the last six months. Russian President Putin used similar statements in the press conference at the end of the meeting with Erdogan and emphasized on the integrity and sovereignty of Syria.

President Erdoğan, who noised the operation to the east of the Euphrates around by uttering “today or tomorrow” before the holidays, visited Moscow to ease his precipitancy. He had already spoken with Putin on Friday, 23 August, and stated that the attacks in İdlib damaged the resolution efforts and they are likely to transform into serious threats for Turkey’s national security. It was reported that the request for a phone call came from the Turkish side in a statement made from the Kremlin. Apparently, Moscow could not be convinced over the phone call and a one-day visit was arranged. Taking advantage of the opportunity, Russian President Putin invited Erdoğan, even though it was not in Erdogan’s agenda, to visit the Opening Ceremony of MAKS-2019 International Aviation and Space Salon, where China is the main partner. On this opportunity, the Turkish delegation was introduced to the Su-57 and Su-35 fighter jets, which could be replaced by the US-canceled F-35 agreement.

If we look at the statements of Russian President Vladimir Putin, it is visible that the Turkish delegation was pressured on other matters as well. The formalization of the Akkuyu Nuclear Power Plant, which does not go at the speed and format desired by Moscow, and the construction of the new line set an example for this inference. In addition, the sales of military and technical materials made in Russia remain at the forefront. Putin stated the following in a press release: “Civil aviation is also a field where we are proud of. They liked our light helicopters. These can be used for medical purposes. Joint studies can be carried out on Su-35 aircraft. Cooperation on the Su-57 is also possible. We have lots of opportunities. We also have the potential for joint production.”

With regard to Syria, Russia has constantly highlighted the Astana format. They emphasized that the stabilization of the situation in the field is only possible with the Damascus regime, that the Constitutional Committee should start taking responsibilities, and nobody should oppose to the sovereignty and integrity of Syria. Putin stated, “We are deeply concerned about the situation in Idlib. We set the framework with Turkey for additional measures for the eradication of terrorists. It is important to focus on the territorial integrity of Syria. Moscow and Ankara are concerned about the attacks in the de-conflict zone in Idlib.”

Harsh statements had come from the Moscow delegation at the meeting of the three guarantor countries consist of Russia, Turkey, and Iran in the first week of July in Astana. Two Russian officials voiced their expectations from Turkey about Idlib. One of these officials, Putin’s Special Envoy to Syria Alexander Lavrentiev, said that the current situation in Idlib is not sustainable. He mentioned that almost 90 percent of Idlib is under the control of Hayat Tahrir al-Sham, an said, “We cannot allow a terrorist organization, which holds 3 million people hostage, to stay in Idlib easily.” Russia sees the HTA as a terrorist organization, while Ankara does not accept this.

Another Russian official, Head of Russian Centre for the Reconciliation of Opposing Sides in Syria Maj.Gen. Alexey Bakin talked more frankly: “Within 24 hours, we expect the Turkish side to fully adhere to the Sochi Agreement, which allows militants and weapons to withdraw from the gun-free zone and attacks to be stopped.” Russia started operations after the mentioned 24 hours.

At the same meeting, Representative of the Syrian Arab Republic to the United Nations and Head of the Syrian Committee Bashar Jaafari spoke again with a high volume and said: “Everyone, even the Turkish delegation, accepts that there is terrorism in Idlib and 85 percent of the terrorists in Idlib are from Al-Nusra Front, and everyone knows that the Turkish regime supports this terrorist organization and other groups affiliated with them in Idlib.” All these developments actually made Ankara go off the deep end. Even the Syrian President Assad said, “All of these developments showed the world that Ankara stands behind these terrorist groups.”

The characteristics of the Su-57 and Su-35 fighter aircraft, which shined out during the meeting of President Erdogan and Russian Leader Putin, were immediately compared with the F-35s in the Turkish media. International Aviation and Space Salon (MAKS) is a biennial and comprehensive event organized at Moscow’s 4th Airport, Jukovski. Former Soviet Union countries such as CIS, China, and India are among the participants. The details of the Su-57 and Su-35 fighter planes introduced to the Turkish delegation as a replacement for the US-made F-35s were explained by Dmitriy Rogozin, the President of Russian State Space Agency.

Su-57 has been produced since 2002. It is a multi-purpose fifth-generation aircraft developed for the air force which is well-equipped, single-seated, twin-engined and has wide maneuverability. It also features the characteristics of MIG-29 and Su-27. This model airplane is said to have some hidden features. The first flight took place on January 29, 2010, but mass production is scheduled for 2020. Russia’s 5th-generation fighter aircraft called the Su-57s have a maximum speed of 2 thousand 600 kilometers per hour and they can fly 5.8 hours. It can carry a maximum combat load of 10 thousand kilograms and has about 11 thousand 100 kilograms of internal fuel reserves.

And Su-35 is an improved version of Su-27 fighter jets. Single-seat pilot cabin, twin-engined and has wide maneuverability. The first flight took place in February 2008. The Chinese air force and Indonesia are among the countries that have already ordered this fighter jet. Its speed is 2450 kilometers per hour. The body of the aircraft, where titanium alloys were used intensively, extends the life of the aircraft up to 30 years. The Su-35, which has an increased maximum take-off weight of 34.5 tons, costs $35 million per piece.

Ankara is in a tight corner after leaving the Safe Zone negotiations empty-handed, the progress of the Russian-backed Syrian army in Idlib, the attacks on Turkish military observation points and Turkish convoys. Syrian President Bashar al-Assad’s advisor Bouthaina Shaaban accused Turkey of supplying weapons to militants and stated that the Turkish observation points in Idlib might be destroyed by the Syrian Army. If this happens, TSK will suffer huge losses. In short, Erdogan, who noised the operation around by uttering “today or tomorrow” before the holidays, visited Moscow with an urgent decision to ease his precipitancy. On his return, he may have returned with the decision to accelerate existing projects and purchase new Russian-made military products such as Su-35 or Su-57.