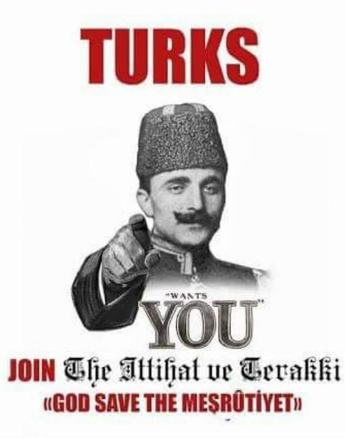 Mustafa Kemal Ataturk, the founding father of the modern state of Turkey, declared in 1931 that the republic’s foreign policy would be one of “Peace at home and the world”.

From that time until the current Justice and Development Party (AKP) government of President Recep Tayyip Erdogan sent troops into Syria in 2016, Turkey had not been directly involved in any wars.

In February 2004 the AKP articulated the ‘Zero Problems with the Neighbours’ policy in February 2004. However, the problems is that in contrast to the party’s stated foreign policy, President Erdogan has personally been directing Turkey’s military operations in Syria, Iraq, Libya.

Turkey now has military bases in Iraq, Syria, Qatar, Somalia and is currently negotiating with Sudan to build another military base on Suakin Island.

Is Erdogan pursuing a Neo-Ottoman expansion in the Middle East and North African regions or is Ankara’s aggressive foreign policy another form of the Young Turk adventurism that led to the collapse of the Ottoman Empire?

The Committee of Union and Progress (CUP) established in 1889 by medical students and who were known as the Young Turks movement initially pushed for democratisation and reform in the Empire.

The secret organization turned into a political party as CUP members in 1908 successfully toppled Abdul Hamid II, the last Ottoman sultan to hold absolute power. Following that toppling, the Young Turks ruled the empire until Ataturk formed the Turkish Republic in 1923.

The Young Turks’ military adventurism brought the Ottoman empire two Balkan wars and the First World War, leading to the final collapse of an empire that had endured for some 600 years.

The similarity between the CUP and Erdogan’s AKP are necessary to understand what is really driving Turkey’s involvement in the region today.

CUP members received huge support from minorities at the beginning as they called for a new constitution and questioned the Ottoman monarchy’s absolute authority.

Similarly, Turkish liberals, some Kurdish groups and Alawites supported AKP’s rule when it first came to power, especially as Erdogan’s party had promised reforms that would see Turkey gain European Union membership as well as ensure a civil constitution to restrict the Army’s role in politics.

CUP promised “freedom” to challenge Sultans rule and AKP called for democracy to challenge Turkey’s absolute secularist regime that was dominated by the military.

After becoming the ruling party, CUP’s Central Committee took all the decisions by silencing rest of its members.

Similarly Erdogan has stepped back from democracy and transformed Turkey’s parliamentary system into an executive presidency, effectively creating one-man rule. Just like the CUP, he currently runs the country with a few ministers and his advisers.

CUP suppressed a mysterious coup attempt in 1909 and used the coup as a tool to silence critics throughout its rule.

The AKP has also taken advantage of the mysterious July 2016 coup attempt to oppress all the critics at home.

CUP strictly controlled the newspapers, closing those critical of it.

Not to be outdone, Erdogan has similarly shut down 170 media organizations. The AKP controls social media and Turkey is the worst jailer of journalist in the world.

CUP’s devoted members assassinated many critical figures and during the AKP era, many extra judicial killings have been recorded, such as those of Armenian Hirant Dink, Kurdish Lawyer Tahir Elci.

A reputed Turkish mob boss Serkan Kurtulmus who was arrested in Argentina recently told Turkish media that the Erdogan government asked him to murder American pastor Andrew Brunson and blame it on the Gulen Movement.

Turkey is trying to extradite Kurtulus over several accusations, including alleged supply of illegal firearms to radical groups in Syria and the killing of a Russian pilot in 2015.

The Young Turks’ elections were highly controversial and a century later, the Organization for Security and Co-operation in Europe reported that AKP’s June 2018 Presidential election were not free and fair as the voting process was held under a state of emergency that restricts public gatherings and civil liberties.

Like the Young Turks, the AKP created its own bourgeoisie through providing state tenders to its supporters. CUP completely achieved the state capture and to continue their ruling, formed an alliance with Armenian groups. But when those groups broke away and ended the partnership, the CUP punished hundreds of thousands of Armenians.

It seems history repeated itself. The AKP also received huge support of liberals for the party’s challenge against Kemalist establishment, but the AKP has jailed many of those liberals when they criticised the AKP policies and excesses.

Erdogan’s AKP started a Kurdish peace process in 2013, but when the pro-Kurdish party HDP garnered 13 percent of the votes in the June 2015 election which caused the AKP to lose its parliamentary majority, Erdogan ended the peace process after the election and has since placed many Kurdish-majority cities under AKP administration.

The Gulen Movement’s educated members were a golden opportunity for Erdogan to restrict the Army’s power and to reduce the power of Kemalist bureaucrats, but when same Gulen followers exposed AKP corruption in 2013, Erdogan declared war against the movement.

Kemal Kilicdaroglu, the leader of Turkey’s main opposition party described the July 2016 Coup attempt as a coup managed by the AKP for Erdogan to gain more power, but Erdogan blames the Gulen Movement without any concrete evidence. He has since conducted a purge against Gulenists that similar to CUP’s Armenian massacres.

Just as the Young Turks lead Turkification policy against Ottoman’s ethnic groups in Balkans and Middle East, Erdogan’s intelligence chief Hakan Fidan has said that the country is are sending arms to Turkmen groups in Syria.

Turkey’s Foreign Minister Mevlut Cavusoglu visited Beirut after the port blast and said that Turkey is ready to give citizenship to Turks and Turkmens in Lebanon.

Young Turks initially promoted pan-Islamism to receive support from the Muslim world but they failed in their efforts to get Muslims to support the failing Ottoman Empire.

Erdogan tried to take advantage of the Arab Spring to portray himself as a leader of Muslims. Since Islamist Egypt leader Muhamed Morsi and Sudan’s Omar al-Basher have been toppled, Erdogan has largely lost his influence in those two countries.

Ankara backed the rebels against Syria’s Bashir al-Assad since 2011 but Turkey-backed groups have been rapidly losing ground to Assad’s Russian backed forces.

In Libya Ankara has also failed to enter the strategic cities of Sirte and Jubra as Egypt and Russia threatened to counter Erdogan.

The Young Turks’ military operations in the region in their adolescence spirit destroyed a 600 years old empire which extended throughout one of the world’s most strategic locations.

Former Turkish Foreign Minister Yasar Yakis said Turkey’s current situation is very similar to that of 1912 Balkan War days with Erdogan’s military adventure in every corner of the Middle East and North Africa region threatening world peace and the state of Turkey itself.