HomeExpertsFrom “the Three Pasha” in 1921, to Three Modern Triumvirate of Turkey...
ExpertsTop Stories On Turkey 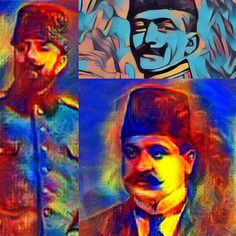 Oxford dictionary defines the term of triumvirate as a group of three powerful man holding power in ancient Rome.  In particular (the First Triumvirate) was the unofficial coalition of Julius Caesar, Pompey, and Crassus in 60 BC and (the Second Triumvirate) a coalition formed by Antony, Lepidus, and Octavian in 43 BC.

Triumvirate represent their share of society in political leaning. Their political and ideological orientation differ from each other but agree to cooperate so they can better serve to the society as they claim so. In Triumvirate, one can hail from right left, one can come from far right, and the other can be liberal. The more divergence underlines their power to form a desired coalition, the more repressive they become to justify. Through the history of political Science, there are notable examples of Triumvirate coalitions, both formal and informal.

The collective power share in triumvirate’ understanding is reciprocal that is to say “you scratch my back, I will scratch your back” tit for tat, an eye for an eye” mindset of governing, as core values defined their coalition. Each in Triumvirate serves her or his personal interests, personal interests interwoven to their -what they call “ground” – constituents.

Turkey has also Triumvirate in its history. The first Triumvirate in Turkish history came under the Committee of Union and Progress ( CUP), a pan Turkist party in 1889- 1018.  The first Triumverate was called notorious “Three Pashas” were three senior officials who ruled the Ottoman Empire during World War I made up of Mehmed Talaat Pasha (1874–1921), the Grand Vizier, (in modern language as prime minister) and Minister of the Interior. Ismail Enver Pasha (1881–1922) the Minister of War; and Ahmed Djemal Pasha (1872–1922), the Minister of the Navy.

These “Three Pasha” tantamount to “the first Triumvirate” of Turkey has interesting history coinciding with eventful political destiny of Turkey that brought them together. What make it more interesting that they took flagrant decisions that brought Ottoman Empire to its knee. Three main events rolled up during these three Pashas were 1. Masterminding the first military coup 2. Responsibility to enter Ottoman Empire to the World War I 3.  Causing the Armenian Genocide.

The 1913 Ottoman coup d’état, January 23, 1913 was  also known Raid on the Sublime Porte ( Babi Ali Baskini) paved a way for these three Pasha to rule the late Ottoman Empire and they become the first de facto leaders.

In nutshell, the coup was orchestrated by CUP members lead by Ismail Enver Basha and Talat Pasha. Under the leaders of these two pasha, CUP members surrounded the Sublime Porte and provoked the crowd public around the building, the plan was to force Grand vizier to resign, the CUP members claimed that Edirne -the west northern city- was going to give to Bulgaria, as the first Balkan war was going on, Bulgaria demanded the Edirne province. The CUP used this demand as an actual concession against Kamil Pasha, Prime Minister in time and leader of the Freedom and Accord Party.  During the coup the Ministry of Navy was assassinated and Kamil Pasha had to cede the office. CUP took power and governed the Turkey under an authoritative leadership until dissolution of World War I. Coup leader, Enver Pasha pulled out from the London Peace Agreement and sided with Germany to World War I.

Mustafa Kemal Ataturk blamed them for causing to enter Turkey into World War I, later he harshly criticized them to take the Turkey to the nowhere and caused her to collapse. Ataturk ties with CUP were entirely damaged, as he desired.

Since then Turkey has been ruled under the maximum three leaders, “Turkish Triumvirate”, this is an evocative attempt to describe the landscape of the political life of Turkey but there is a reality in it while examining the Turkey political history since 1923 up until today, we see the coalition of triumvirate.

Like coup in 1913, the coup in 2016 brought de facto leaders, an informal and formal mixed the triumvirate coalition was shaped among three political leaders made up Recep Tayyip Erdogan (Justice and Development Party) Devlet Bahceli (Nationalist Movement Party) and Dogu Perincek (Homeland Party), modern triumvirate leaders are coming from the opposite and conflicting political spectrum but formed a coalition based on “scratch back” metaphor in today’s Turkey. They don’t forgo their personal and party interests, conflict and deterrence based on their mutual take away. Turkey today, is a coalition of triumvirate who represent diverse political “ground”.

Like the first  “Triumvirate” allied with Germany in World War I and withdrew from the London Peace Agreement, Three Modern Triumvirate describe their coalition in similar way, they claim Turkey is under the siege, face economic war and has to cut the tie with America to side Russian Federation.  Further, they will be hold accountable polarizing society using genocidal method looming and lurking in horrible consequences, as Three Pashas did it.