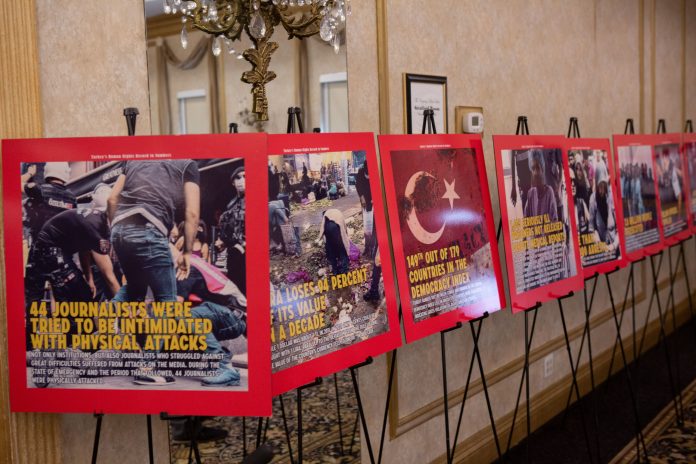 A living witness to the unlawfulness committed in Turkey for years, the ‘Genocide Exhibition’ opened in New Jersey, USA on last week Saturday.

Several activists, journalists, opinion leaders and volunteers attended the International Solidarity For Human Rights Forum organized by the Advocates of Silenced Turkey (AST), which investigates and declares to the international public the human rights violations, unlawful trials and torture in Turkey.

The ‘Genocide Exhibition’ left its mark on the event which witnessed massive interest from the participants. Over forty personal items belonging to several victims of torture and lawlessness including Garibe Gezer, who committed suicide due to systematic torture and rape by prison guards; 34 victims of the Roboski air raid half of whom were children; Zabit Kisi, who was abducted and whisked from Kazakhstan to torture in Turkey for 108 days; Taybet İnan, a homemaker whose corpse could not be removed for 7 days after she was gunned down with a fusillade of bullets on a street; Tahir Elçi, an attorney and human rights defender murdered in broad daylight and in full view of news cameras; Hatice Akçabay, a homemaker who drowned with her three children when their dinghy capsized while attempting to cross the Maritza River to Greece after they were not given the right to life in Turkey in the wake of the July 15 fake coup; 8-year-old cancer patient Ahmet Burhan Ataç, who was gradually condemned to death by the regime through arbitrary and unlawful practices, and Ali İsmail Korkmaz, who was beaten to death by the police for participating in the Gezi Park protests, were exhibited with their personal stories.

While Tahir Elçi’s tie was the most prominent personal item of the exhibition, all items and materials on display moved the visitors immensely.

Volunteers who proclaimed human rights violations were given plaques in the program. Fatih Yıldırım, who traveled 200,000 miles in his ‘Liberty Truck’ to draw attention to the atrocities in Turkey, was conferred the ‘Activist of the Year’ award. Feride Sarıbaş, who transcreated the life of Ahmet Burhan Ataç, nicknamed Kara Efe and one of the youngest victims of tyranny, into a comic book was awarded as the ‘Young Activist of the Year’. Eyüp Esen, who raised awareness among thousands of people about the atrocities in Turkey through his conferences and seminars on many platforms, especially at universities, was awarded the ‘Defender of the Year’ award. New York-based ‘Committee of Concerned Scientists’ association was awarded the ‘Human Rights Organization of the Year’ for its work on grievances of academics.

At the end of the exhibition, a live auction was held for the drawings depicting the atrocities in Turkey. The proceedings of the auction, which attracted great interest from the participants, will be used in proliferation of the exhibition to wider masses and publicizing the grievances.