HomeExpertsGiving back hope to Syrians
Experts

Giving back hope to Syrians 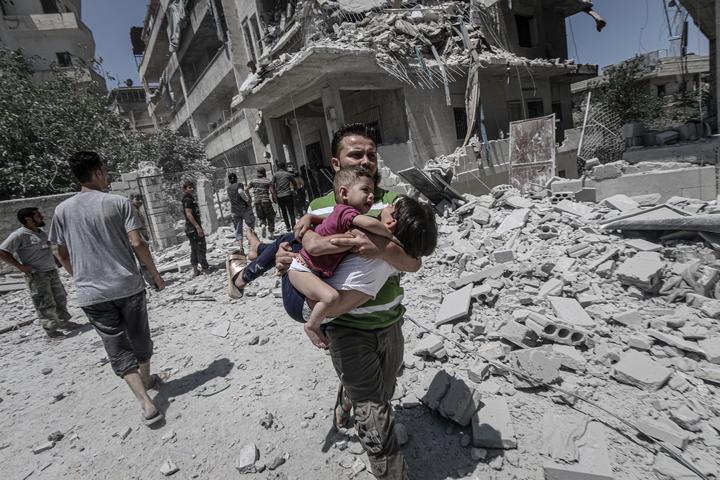 Before dust settled under the feet of the Ankara Fifth Summit on Syria, hosted by President Recep Tayyip Erdogan, UN Secretary General Antonio Guterres announced, from New York, the launch of a Constitutional Committee targeting bringing the country’s ruinous civil war, now in its eighth year, to an end.

“I strongly believe the launch of the Syrian-led committee can mark the start of a political path away from tragedy and toward a solution…” he said.

The war has killed more than 370,000 people and continues to rise as government forces strike the opposition in its northwestern stronghold of Idlib; with refugee figures swirling to nearly four million, including women and children.

As further proof of commitment, within one week of the launch announcement, the UN Chief came back to the world to reveal the committee line-up. This ended the stalemate that had been gripping the process back due to differences between the Syrian Government and opposition within the framework of the United Nations Security Council Resolution (#2254) adopted four years ago.

As resolution guarantor nations, Russia and Turkey together with Iran, have been steering efforts to form the committee – the process of which involved the holding of the summits in their countries’ capitals on the basis of rotation

This is on top of organizing regular ‘expert meetings’ between delegates from the (Astana process) guarantor nations, the Syrian parties, the United Nations and other regional observers.  The Fifth Summit appointed Lebanon and Iraq as new observers of the Astana process on Syrian settlement.

Guterres announced that according to an agreement between the Syrian Government and opposition, a 150-member constitutional committee would be formed. It would constitute 50 representatives each from the government, opposition and civil society. There would also be a 45-member small body with 15 representatives from each of the three parties. The first meeting is scheduled for October 3, to be held in Geneva, Switzerland, under UN auspices.

With agreed terms of reference and rules of procedure in place, the new constitution is a step forward toward a political settlement of the Syrian conflict leading to “free and fair elections under UN supervision” in search of lasting and viable peace.

European Union (EU) Foreign Policy Chief Federica Mogherini said this move would give back hope to the Syrians. “We look forward to the inaugural meeting of the constitutional committee at the earlier possible opportunity and expect that this should represent the start of a process ultimately leading to peace that Syrians so clearly need and deserve.”

Indigenous African knowledge has an inexhaustible stock of advices that all stakeholders in the Syrian conflict and beyond can tap on for lasting and viable peace. The following are just a few:

It is not possible to go through all the blobs in detail. It suffices to zoom on a few that  might be more meaningful to the delivery of peace among the Syrian people, members of the constitutional committee, the three guarantor nations – Turkey, Russia and Iran—and the Middle East Countries in their whatever combinations.

For the sake of humanity and ethics along which we should make the world a better place to live for all, the first blob deserves the first attention. Here, the words of President Erdogan during his address to the UN General Assembly in New York put it better.

He said that many of the more than three million asylum seekers residing in Turkey are Syrian. The number of Syrian children born in Turkey has reached half-a-million. He said people must also “never forget” the world’s “baby Alans” as he held up the photo of Alan Kurdi, the three-year-old boy who died in 2015 while trying to reach Turkey’s shores. With that he had painted the true picture of the plight of refugees.

In the words of Pope Francis, “today’s world is increasingly becoming elitist and cruel. ….Wars only affect some regions of the world, yet weapons of wars are produced and sold in other regions, which are then unwilling to take in refugees generated by these conflicts.”

During his very recent tour of Africa, Pope Francis cautioned the world: “We cannot look to the future, or build a nation, an equitable society on the basis of violence…” Looked at from another angle, the world must refuse to let human relationships be governed by vengeance or repression or allow hatred and violence to have the final word.

After this one would have justification for jumping to the last blob. In fact, that is where quite a bigger world problem lies and, therefore, the better solution as well. The truth on the ground is that Russia, Turkey, and Iran – the three UN resolution guarantor nations– are in Syria standing on the opposing sides of the conflict.

Russia and Iran support Syrian President Bashar al-Assad, whereas Turkey, along with the United States, and European and Arab allies, supports opposition groups. In the quest for peace, tagging them as “rebels” is counterproductive. It creates a negative negotiation environment. So, with due respect, the “rebel” catchword is not supposed to appear anywhere in the Committee‘s work papers.

Technically, Iran and Russia are not occupying forces. They have been invited on board by the Syrian Government. They are Syrian allies.  But the United States and Turkey maintain an illegal military presence in northern Syria. “Any foreign forces operating in our territories without our authorization are occupying forces and should withdraw immediately.”Minister Muallem says.

More to it, Syria’s civil war has drawn in numerous foreign militaries and thousands of foreign fighters, some of whom may not be wanted back to their home countries. The committee has to see this coming, taking a lesson from Iraq. Osama bin Laden was one of them.

The phenomenon of such fighters is not new.  In the years we used to call them mercenaries, the likes of the famous Rolf Steiner. These were on hire. Warfare was their only business. Today, the situation has changed. The style is one of hiding behind religion. Brothers, sisters, families are turned against one another on the pretext of faith, ethnicity and the like. This is why, for example, we hear of Sunni and Shiite groups fighting. Fighting for what? The world has come to equate religion and extremism. Violence, hatred, vengeance have replaced countries’ constitutions.

The start of the Syrian Constitution Committee process notwithstanding, there is something more that is supposed to be done among the people and their leaders.  There is need to re-write consciences across the board. Dialogue, dialogue, dialogue is the prescription.

An indicator is already flickering in the wrong direction. What can be achieved in the absence of the Kurdish community? Where do they belong? The Syria peace settlement process needs more than an equation, which excludes some communities. It needs a theorem approach. That theorem is dialogue, which must be inclusive to qualify for the name.