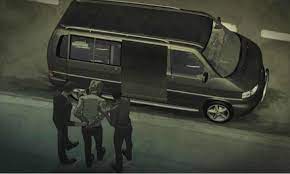 Guillaume Perrier, who has been the Turkey representative of Le Monde newspaper for many years, published an article in France’s prominent center-right leaning Le Point magazine titled “Opponent hunt by Turkish “packagers”

It is indicated in the article that Milli Istihbarat Teskilati (MIT – Turkish National Intelligence Service) targeted more than 4600 individuals of whom include teachers, businesspeople, activists, and expats in more than 110 countries around the world after the unsuccessful coup attempt of July 15th. The article also draws attention to Erdogan’s statement that actually serves as the verbal explanation of this mission: “We will catch them tightly wherever they may go.”

The article continues to focus on the suchlike and most recent operation where Selahattin Gulen was abducted from Kenya to Turkey. It is pointed out that Gulen showed up in Turkey after being disappearing in Kenya and Erdogan announced that “a big fish, a terrorist is being brought to Turkey” about this incident. The article also indicates that Orhan Inandi, an educator who was abducted in Kyrgyzstan, experienced a similar fate and strong protests took place after his disappearance in Biskek, and showed up in Turkey all skin and bones after two months. The abduction incident and the reaction to this incident were detailed in the article.

It is stated that the Turkish government is granted impunity; Turkey exercises influence over these countries by taking advantage of the bilateral relations; Turkey takes whatever it wants thanks to this influence and gifting method, and as an example to this, the two countries above granted commercial and military advantages.

The article continues: “The global Gulenist hunt is Ankara’s overtly adopted policy. Bekir Bozdag, who was an official of AKP (Justice and Development Party) back in 2018, was delighted after he found out the news that 80 members of the Gulen Movement were caught in 18 countries. Abulhamit Gul, who was the Minister of Justice in July 2020, had stated that 116 criminals were “packaged”. 115 individuals from the following 33 countries were brought to Turkey since the summer of 2016 according to the NGOs and human rights organizations abroad: United Arab Emirates, Saudi Arabia, Malaysia, Georgia, Pakistan, Sudan, Ukraine, Albania, Cambodia, Algeria, and more…  The modus operandi is generally the same. Turkey formulates the extradition request after the targets are spotted. Should the country in question does not submit, underground teams take action. They have private planes and jets. Ankara started negotiations in order to cease the activities of the Gulen Movement in 105 countries. Back in January 2020, President Erdogan declared during the opening of the “castle” of the Turkish secret service in Ankara that the “packaging” operations will increase incrementally. MIT, which has been led by the loyal Hakan Fidan since 2010, is on duty.”

It is stated in the article that Armenians, Kurdish separatists, and the followers of the opponent Fethullah Gulen are among the targets of MIT, which is a state inside the state with 8000 members abroad and thousands are located in Europe. It is said that 3 teachers were arrested in Gabon, Lumiere by the Gabon police and the network of the Gulen Movement in France took action, and an individual called M.A., who is a Turkish-French, was sent there. M.A., who went to Gabon, explains everything he has been through: “I went to Gabon and made contact with the families right away. However, the detainees were taken to Turkey together with their families on a private Turkish plane. Should I had been with the families at that moment, they would have taken me with them. The police went to the school and asked about me after a few days. And I returned back to France with the first scheduled flight after finding out that the embassy has no intention to protect me.

The article states in the conclusion that Turkey is far more cautious in Europe where many members of the Gulen Movement are present. On the other hand, according to a German domestic intelligence report, it is said that the MIT operations in Moldova and Kosovo are divided the political classes and disrupts internal affairs; Bulgaria is the only country in the European Union that accepts the extradition requests of Ankara; approximately 8000 MIT agents and thousands of informants who have the task to blacklist the opponents are deployed across the EU. It is stated that approximately 20 investigations were opened for the attempted espionage and infiltration into state institutions, however, the most farcical operation was carried out in Zurich. It is indicated that Ali. F, who has double citizenship and has been living in Switzerland for 40 years, was told by the police that they were aware of the situation after he went to the police after he had suspicions about an MIT operation in August 2016, and he was shown some images and made listen to some tapes. It was found out that the Turkish spies offered their subcontractors 300.000 EUROs to put GHB, a psychotropic agent, inside the food of the individuals in order to hand him over to MT. These preliminary meetings were carried out in a cemetery in Zurich accompanied by two Turkish diplomats from the Bern embassy and the listening of the Swiss’ intelligence. The article points out that the Turkish agents were not prosecuted in Switzerland despite this scandale