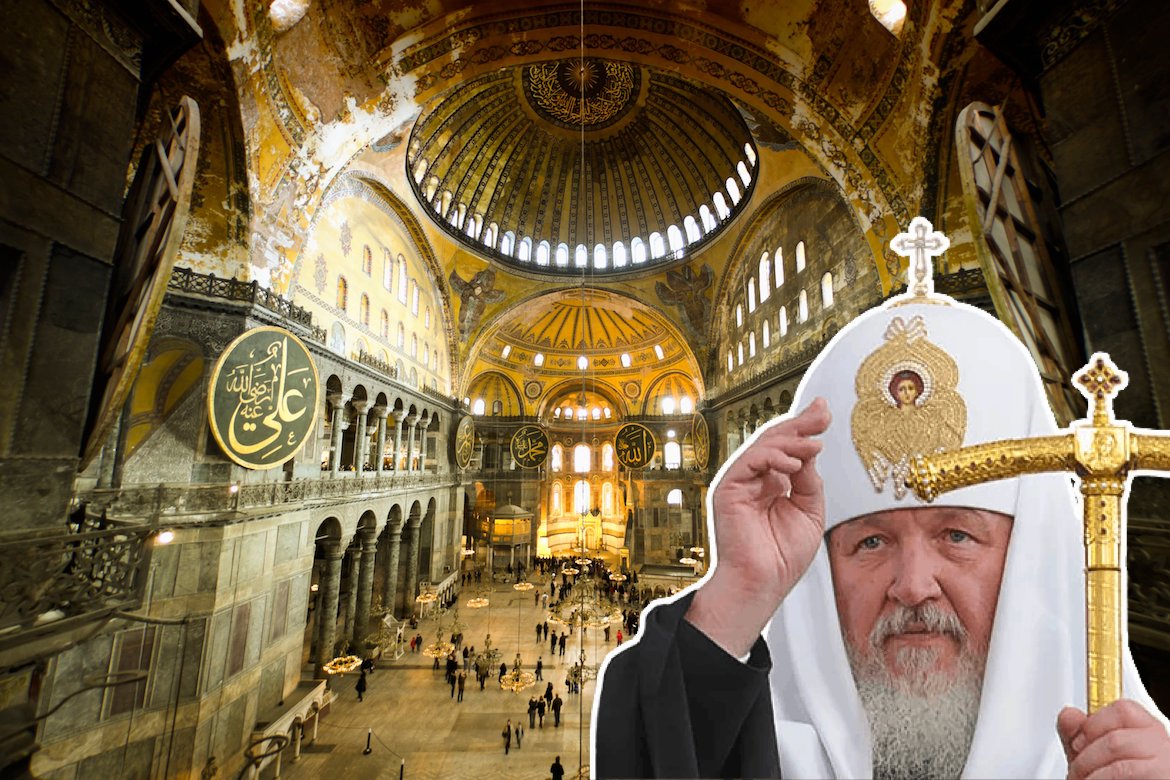 Hagia Sophia, which has a very high historical and archaeological value, is of course one of the holiest structures in the universe we live in by the Christian faith. Therefore, statements regarding the opening of Hagia as a Mosque causes international reactions. Both the U.S and Russian Federation expressed their concerns and urged Turkish Governments to protect Hagia Sophia as a museum both before and after the State Council case.

‘Built in the 6th century in honour of Christ the Saviour, this church is of great importance to the whole Orthodoxy. And it is especially dear to the Russian Church. Prince Vladimir’s envoys stepped across the threshold of this church and were captivated by its heavenly beauty. Having heard their story, St. Vladimir received baptism and baptised Rus’, which followed him into a new spiritual and historical dimension – Christian civilisation.’

‘Many generations conveyed to us admiration for achievements of this civilisation, with us now being its part. And Hagia Sophia has always been one of its devoutly venerated symbols. The image of this church has become deeply ingrained in our culture and history, having given strength and inspiration to our architects of the past in Kiev, Novgorod, Polotsk – in all the major centres of the spiritual formation of Early Rus’.

Today the relationships between Turkey and Russia are developing dynamically. At the same time, one should take into account that Russia is a country with the majority of the population professing Orthodoxy, and so, what may happen to Hagia Sophia will inflict great pain on the Russian people.’

It is seen that the Russians and other Slavic peoples sided with the Byzantine Empire in a period when Pax- Rome gradually lost its power and started to be replaced by Pax-Bizantiona. With the adoption of Orthodox Christianity entirely filled with Byzantine motifs, Russia has been under the influence and strength of the stagnant Byzantine civilization. In Kiev, which was regarded as the most powerful reign of the Russians in the X century (AD 957), the Byzantine model was adopted in the state administration after Queen Olga’s difficulty in choosing between Roman Christianity and Byzantine Christianity and Prince Vladimir accepted the Byzantine Orthodox belief in 988.

With the acceptance of Orthodoxy, the Russian church received a “metropolitan” title, subject to the patriarch of Istanbul. The Greeks coming from Istanbul constituted the spiritual class. Thus, there was a great rapprochement between Istanbul and Kyiv-Russia caused by the church. The most important political feature of these developments that directly concern the Russians is that Orthodoxy adopted the principles that accepted the unconditional domination of the empire and the peoples who remained distant from each other due to tribal differences until that time began to come closer by religion.

During the reign of Yaroslav (1019-1024) Christianity was fully settled in Russia. When the church organization was completed, the Russian Orthodox church became an institution in which Russian culture and tradition were preserved, protected and developed. Orthodoxy soon became a genuine Russian religion and became an integral part of Russian national consciousness.

The Russians considered the seizure of Istanbul, which was accepted by Orthodox Christians for 1100 years, to represent true Christian faith, as a punishment by God since Byzantine church which was willing to unite with Rome by accepting the Florence Council.  In this case, Moscow remained the only guardian of true faith. This fact, Father Philotheus expressed: “A new Rome, III. Rome rises from the north and illuminates the universe. This is III. Rome will last forever and IV. Rome will never happen. For this reason, Moscow became a sacred place and took over the right to be the heir of Rome. Its task is to become a world empire. “Upon these developments, new Hagia Sophia churches were built in different parts of the Russian geography since the end of the 15th century.

Some experts see this development as a precursor to the collapse of the alliance between the Fener Greek Patriarch Bartholomeos and the US State Department. And they even anticipate turning Hagia Sophia into a mosque, the position of the Russian Orthodox Church will come to the fore again.

Stanislav Stremistky, an expert on Religion and Philosophy wrote in his article that “Turks have spilled salt on the wounds of the Greeks once again”, and that the decision of Hagia Sophia could have serious international reflections: “First of all, changing the status of Hagia Sophia is not just about Turkish-Greek relations,” It is a symbol that Ankara will leave the Kemalist movement and pro-Western trends, Islamist approaches will increase, and the return of Ankara to the imperial ambitions with Hagia Sophia, which started the golden age of the Ottoman Empire. On the one hand,  Christians and Turkey it could cause a sharp conflict between Muslims, on the other hand it would  change the geopolitics of the Middle East. ”

“With this decision Erdogan has retaliated the United States, who recognized the Israeli sovereignty in the Golan Heights,” says the Russian expert. This is true in terms of itself. But Ankara has used this historical treasure cathedral as a geopolitical tool. Understandably, Greek diplomacy is outraged. Let the Patriarchate of Constantinople, who is far from maintaining the status of Hagia Sophia, drink cold water upon the event!

One of the leading religious figures of Russia, Andrey Kurayev, in an article published on ‘Vzglyad.ru’ news portal, predicts that with Erdogan turning Hagia Sophia into a mosque, the claims of the Fener Greek Patriarchate on geography after the Soviet Union will weaken and the position of the Russian Orthodox Church will come to the fore.  According to Kurayev, Erdogan’s intention is to draw public attention in another direction, as Russian politicians did in Lenin’s mausoleum debate in Russia. Orthodox Experts Association President Kirill Frolov said that with Hagia Sophia becoming a mosque again, Patriarch Bartolomeos will lose great prestige.

Stanislav Tarasov, from the Near East – Caucasus Research Center also thinks that turning the building into a mosque will bring a tactical advantage for Russia. Tarasov says that there are problems between Moscow and Istanbul patriarchs due to a number of issues and these problems will increase.