HomeExpertsHow many arrested journalists are there in Turkey? A Dignity centered methodology...
ExpertsTop Stories On Turkey

How many arrested journalists are there in Turkey? A Dignity centered methodology for CPJ 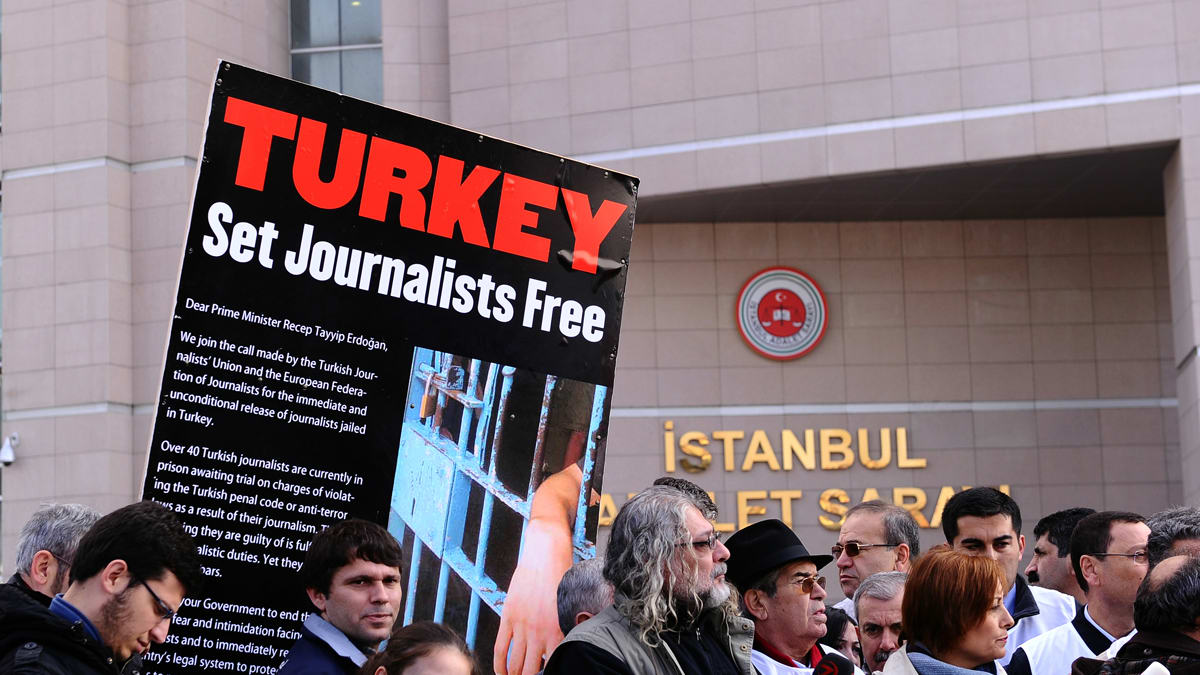 Erdogan’s senior adviser Professor Dr. Gulnur Aybet’s denial of any violation of journalists rights in Turkey shocked HARD TALK’s Stephan Sackur following The Committee to Protect Journalist’s (CPJ) latest report. CNN also cast light on how “jailing journalists has become a ‘new normal,’ following the advocacy group’s report. While Aybet says that there is no journalists in prison, CPJ documents that there are at least 68 arrested journalists in Turkey.

It was only a few days ago, President and Justice and Development Party (AKP) Chair Recep Tayyip Erdoğan has targeted Fox TV anchorperson Fatih Portakal for the third time over the last week by saying, “If you do not know your place, this nation will hit you in the back of your head.” This particular incident indicates the great jeopardy that the journalists face in Turkey when they criticize Erdogan.

In a news report appeared at Bianet.org, Mustafa Kuleli from Journalists’ Union of Turkey (TGS) stated that Erdoğan has been giving the following message to the media and society of Turkey: ‘I will oppress you with violence. No one can say a word to me, you cannot take to the streets.’

Considering what Erdoğan said, ‘Prosecutors will take action’, he apparently makes it very clear that he is above the judiciary and there is no independent judiciary in Turkey and prosecutors take action upon his instructions.

It was only a week ago, that prosecutors accused also the most secular columnists Emin Colasan and Necati Dogru as well as three editors of Sozcu Daily of aiding Gulen movement which, Erdogan Government recognizes as a terrorist organization.

How many arrested journalists are there in Turkey? If Fatih Portakal, Emin Colasan and Necati Dogru would be arrested, would they be considered as arrested journalists, or terrorists as President Erdogan suggest? They could probably be in the list of arrested journalists of CPJ since they are so famous and international media paid attention to their situation. But what about other journalists, who can’t find enough media coverage and can’t make their voice heard?

As CPJ is one of the last protection shields for journalists, it is important for CPJ to develop its methodology.

CPJ 2018 report names Turkey as the worst jailer of journalists in the world. CPJ’s country reports are one of the main sources which aid the understanding of the root causes of restrictions of freedom of expression and freedom of speech. CPJ’s 2012 report on Turkey gives a thorough explanation of article 314 of the Turkish penal code and anti-terror law, which “criminalize news-gathering and publication of critical or opposing views.” (CPJ 2012). Turkish prosecutors and judges have a long-standing tradition of abusing the penal code and terror legislation to silence the regime and now, critiques of the authoritarian AKP-led government.

It is obvious that CPJ clearly understands the regime’s anti-democratic tendencies and advises that the Turkish government release “all journalists who are being held on the basis of journalistic activities.” CPJ exposes that fact that the Turkish judiciary’s practices contravene Article 10 the European Convention on Human Rights, highlighting that Article 10 does not protect any individuals from criticism, including the president. CPJ also urges The European Union, The Council of Europe and the United States to force Turkey to free journalists and to respect its obligations under the European Convention on Human Rights. CPJ’s activism aims to force Turkish leaders to abolish the penal code and anti-terror law.

In light of CPJ’s findings, it is perhaps pertinent for colleagues in CPJ to listen and increasingly engage with Turkish nationals from different segments of society. Indeed, a reading of CPJ’s 2012 and 2017 reports, makes clear that CPJ engages all critical groups face to face in order to finalize the reports. On the other hand, what is less clear is how CPJ decides who is journalist and who is not.

CPJ’s December 2011 report prompted criticism from many journalists and defenders of press freedom, as the report identified only eight individuals jailed in direct relation to their journalistic activities. The number was much lower than other international estimates. During that time CPJ admits that “The complexity and opaqueness of the Turkish legal system, especially in cases in which terrorism and sedition is alleged, also pose unique challenges.” In order to not repeat previous mistakes, CPJ announced that “beginning in the early 2012, the organization undertook a thorough case-by-case review, led by a team of Turkey-based researchers.” The biggest concern here lies in the use of “Turkey-based researchers.” CPJ’s latest report shows that Turkey is holding 68 journalists behind bars. The same report says that Turkish leader Recep Tayyip Erdogan shut down more than 100 media outlets by decree since the July 2016 failed coup attempt. It is also evident (and by no means hidden by the regime) that the Turkish government jailed dozens of journalists from Gulen-affiliated media alone. This number is higher that CPJ’s data.

Perhaps a more prudent approach would be for CPJ to investigate each jailed journalist’s “pure professional works” to decide whether these reporters are convicted for their journalistic work or not, regardless of their affiliation with their media house. CPJ could assess whether these journalists have criminal records or have faced any other convictions or charges previously. For instance, the Erdogan government arrested and jailed more than 150,000 people in the post-coup purge. Statistics shows that almost all these people never committed any crime in their lives. Almost all of them have been jailed without charge by a politically-motivated judiciary. CPJ should also understand that Turkey is a highly polarized country. For instance, CPJ reports that more than half of the jailed journalists are Kurdish, whom the Turkish government has jailed because of their affiliation with armed PKK forces. CPJ reports that “deep state Ergenekon” suspect Mustafa Balbay was jailed because of his journalistic work. Leftist journalists are in CPJ’s “journalist in prison” list. A point to illustrate the challenges in CPJ’s methodology, is that a far-right Ergenekon suspect would not agree that Kurdish reporters are doing journalistic work as the state see them separatists. Likewise, most liberal or secularist journalists will not believe that reporters who work for Gulen-affiliated media houses are doing journalistic work as the traditionalist Kemalist regime had never accredited these journalists for military and state functions for many years in the recent history. A prominent journalist from Kadri Gursel who was jailed and later released, harshly criticized his media colleagues who affiliated with the Gulen movement for including his picture in the “photo exhibition of jailed Turkish journalist” in Europe. Turkey’s secularist-elite Cumhuriyet’s columnist Gursel’s ego didn’t tolerate even the solidarity from his ordinary colleagues, highlighting the intricacies of the journalistic world in Turkey and the industry’s internal politics.

CPJ should carefully analyze the arrogance of Erdogan’s senior adviser Professor Dr. Gulnur Aybet who was chosen as one of “the UK’s most powerful Muslim women” in 2009 by the Time magazine. Remember that, without any embarrassment, Aybet said that there are not a single journalist in jail in Turkey because of their journalistic work in Stephan Sackur’s HARD TALK. This Professor, who participated in many academic works in prestigious institutes such as John Hopkins University, Oxford and NATO, defends the idea that Turkish academics can openly criticize Erdogan. CPJ should consider that Kemalist Secularists, Islamist AKP members and Nationalists collectively rule Turkey and are all complicit in their oppression of Kurdish, Alawite, Gulenists, and other ethnic and religious minority groups. As one group refuses to recognize others as human beings, CPJ should determine the criteria for what constitutes a journalist or not, based on each individual’s professional work and regardless of their position against the government or their religious and ideological backgrounds.

Freedom of press in Turkey is far worse than you think.