HomeHeadlineImmersing myself in a P. Ramlee Vinyl LP. and thinking about "secularism"
HeadlineExperts 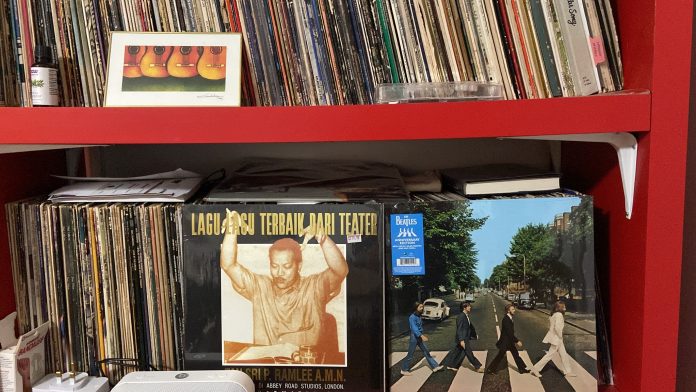 2023 will be my year of more writing. Ten books so far. Already submitted my eleventh manuscript (essays on personalizing history) to Penguin Random House for publication consideration. I am finalizing five manuscripts on a variety of topics and genre, in between heading a Social Studies department, teaching and developing new courses, more writing, and teaching a course in Rhetoric and Composition, besides Human Geography, Modern World History, Sociology of the Future, Global Issues, and Cognitive Psychology. And listening to my vinyl records, doing more traveling, and playing my red Fender Strat!

Below are two notes on my recent travel to Singapore and Malaysia, the former a city I was born in and the latter where I spent my growing up years in the late Sixties and Seventies.

Last two Saturdays in Johor Bahru, Malaysia. In the house, I grew up in. The house, a memory palace, a place I remember, looks strange yet familiar — as always. As how perception played it. As how memory dictates what to feel. Well-kept the house in the village it is — there are no more loved ones. Only one of the clan members remains. No grandpa. No grandma. No mother. It is like an empty village museum with no artifacts to look at and reflect. They are all in my head. And as I headed towards my mother’s room — abandoned for almost ten years now — stories begin to come alive. No, we can’t control memories when they take over and do the strangest things, as you know. They stir the emotions in you. They crank up the psychophysics in you. Rapid firing of memories making fierce connections. You stand there or lie down helpless at times … you start getting sad … angry … melancholic.

My memoir with Penguin Books published last year finally came home in my village in Kampong Melayu Majidee, Johor Bahru, back to where I grew up with fond memories. Besides sleeping on my mother’s bed and hoping that she’d come to visit in a dream that night (as she did several times after her death,) I went to grandma’s room, took a deep breath to smell it, closed my eyes to feel the memories, and let my spirit feel her love, I took my memoir and told her that it too was written for her. Her room was unoccupied for almost a decade.

Raja Habibah Raja Zainal, my maternal grandma I called Tok Mok, was the fifth descendant of the Bugis warrior scholar Raja Haji Fi Sabilillah (who died defending Melaka against the invading Dutch), according to a group of genealogists that came to trace the lineage a few decades ago. That makes me the seventh in the lineage.

Saturday morning at home here in America on January 7. In a house built in 1917. Victorian styled. The environment for the last five years has offered mixed memories, all cultural and celebrating what I have been defined as over my lifespan. A complex identity formed beyond my control, yet today as I sit in this living room surrounded by vinyl records, things began to make sense, ethnographically, semiotically, and philosophically. And scientifically. A secular being I also am.

Yes, “secularism” is just a word to capture the essence and beauty of the world one is immersed in. A way of thinking about being in this world that is in constant flux wherein the forces of scientific thinking and freedom to inquire, since the time of the European Renaissance Period primarily, have helped us progress cognitively.

Whatever cultural wave one is immersed in, the scared and the profane as well, the “West and the East” without boundaries, one is told of the false dichotomy, and the perception one has formed in life, revised in constant motion as well, and becomes the conceptual formations and neural connections in that complex material world called the “brain”, with its corollaries such as mind, consciousness and all — these are celebrated and ought to be in.

Unless one wants to see that “secularism: is to be rejected, especially by the Malay Muslims in Malaysia who are at the mercy of mental colonization and manipulation by their own leaders– this statement is nonsensical and comes from the mouth of the confused and novice propagandist.

In other words, simply put, we need to get rid of labels and let ideas flow and see how they fly around and enter your consciousness and create “the butterfly effect of things”. Embrace life in all its glory and the lesson-filled experiences it has to offer.

And so, today in this “secular home” of mine, I am spending the morning listening to a vinyl album gifted to me by an avid Malaysian vinyl collector. A P. Ramlee LP mastered in the ABBEY ROAD STUDIOS synonymous with the work of the Beatles! Yes, that kind of remastered sound I have been waiting for in P. Ramlee’s albums as well as those of the iconic and nostalgic artists I listened to growing up.

What an honor for an artistic legend, P. Ramlee. And what an immense pleasure being immersed in the classic crisp-crackling-vinyl-spinning sound coming from the hi-fi system in my living room, of a Kenwood turntable and amplifiers and Bose speakers, And yes, vinyl rules still. And what more — an Abbey Road-remastered P. Ramlee LP.