Is it now Asian scramble for Africa? 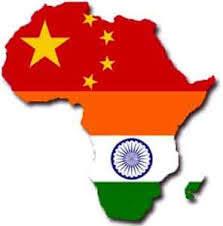 In the early 1970s, entering East Africa’s Kenya Capital Nairobi with Chinese leader Chairman Mao Tse-Tung’s famed Red Book one risked a six-month jail sentence; just as it also applied for thinking that President Jomo Kenyatta was mortal (that he could die). There was neither excuse for nor immunity to this.

Now, about four decades on, President Jomo Kenyatta’s body lies in a Nairobi City Mausoleum. So, he died (of course). And, to be exact, on May 31, 2017, the first passenger train (forget the pocket size Red Book) was flagged off the Mombasa West Station, destined for Nairobi and plying a Standard Gauge Railway (SGR) line, designed and built by the Chinese.

Here we are; face to face with what was unthinkable and criminal during the Mao-Jomo (repelling) era that now is (attracting) perfectly well with their offspring. The Kenya story is even more interesting. The sitting President, Uhuru Kenyatta, is Jomo’s own son. What a U-turn that could easily make bones of his late father shake.

The Kenya experience brings to light another equally interesting pattern: “Is it now the turn/time of Asian scramble for Africa?” While the SGR story belongs to the Chinese, Ksh25 billion-worth of Berths 20 and 21 developments at the Mombasa Port, is funded by the Government of Japan. And this is just Phase One.

The world today is being driven by the economy, translating into industrialization and trade in all their forms. And that is where the competition lies.  At the end of the day, it is the question of destination and numbers – the influence elevations of which could be (actually are) varied – civil, political, diplomacy, trade… and even military.

Going backwards, China has a military base (the first one in its history) at Djibouti in the Horn of Africa. Out of 55 member countries of the African Union (AU), only Eswatini, belonging to three regional economic groupings out of eight, recognizes the Government of the island of Taiwan. Taking for granted that the Chinese have no military interest in Africa, what is the take of the US and its allies in NATO and across the board (including Japan) on this?

On the heels of the Seventh Tokyo International Conference on African Development held in Yokohama, I landed on an attractive newspaper headline in Tanzania. “Should African countries trust Japan’s new strategy on Africa?”

Appearing in a government daily, I knew something had already gone wrong. Here was a case of stepping on foreign policy toes because Tanzania was represented at the conference by the Prime Minister, as representative of the Head of State.

The editor on the following day published an apology perceiving “the overall process of the summit and other meetings as providing an open and inclusive platform for African development initiated by Japan in 1993.” Boxed as usual to attract reader attention but short of being printed bold, the apology signed off with special mention of “the Chinese and Japanese.”

That is where to start from when finding an answer to the question whether Africa is now the 21st century stage for Asian countries’ scramble as opposed to that of the European’s 18th and 19th centuries? In any case, why did the apology start with China when the TICAD Summit was held in Yokohama and largely supported by Japan?  China is the world’s second strongest economy. This fact must be recognized and reflected — it does not matter where you are.

Sub-Saharan Africa, during the first decade of the current century, is on record for having been home to six of the ten fastest growing world economies. A new comer on the industrialization stage and struggling to integrate, the area presents itself as a hot destination.

In Africa, there is a saying that he (ignore male supremacy), who has had a snake bite, bewares a grass slight move. In post-colonial Africa, China hoists the “no strings attached” policy while Japan remains focused on the “Official Development Assistance” (ODA) formula.

African countries seem to have caught the Chinese Belt and Road Initiative fever. An equivalent Japanese initiative is the Tokyo International Conference for African Development (TICAD) with its different versions, the seventh of which has just ended at Yokohama in Japan.

In between, the United Nations Conference on Trade and Development (UNCTAD) figures, reveal that while Japanese exports to Africa dropped by almost half over the last decade and are now perched at about $7 billion, those of China have risen beyond the $100 billion mark with almost an equal value in imports.

Digging deeper, what does one see? The cumulative Foreign Direct Investment (FDI) level of Japan is about one-fifth of that of China. UNCTAD figures for 2017 put Japanese FDI level at $9billion against $43billion for China. This alone pulls back strings on the country’s foreign interests, including the Free and Open Indo-Pacific vision.

TICAD 7 was held under the theme: “Advancing Africa’s Development through People, Technology and Innovation.” This is in line with what Africa needs from Japan.  Africa needs to match with Japan’s strengths such as human resource development as well as science, technology and innovation.  Then together, under the African Union, Africa can move forward, drawing on the Japanese models via TICAD.

On this note, it pays to go all the way to Poland where the people said in a Latin quote: “Nihil de nobis sine nobis”—meaning, nothing about us without us.” This was taken up by Austria and it worked. For Africa it can work as well.

The Chinese and Japanese neighbours know each other very well. Going back to history, when in 1937, for example, Japan encroached on Chinese territory, this did not amount to invasion. So, no war was declared. Between them they have a softer word for a brother’s invasion.

On the same note, when Africa is being strongly warned over being plunged in a Chinese debt crisis trap, it must look back and assess the source of the messages. Satan, cannot caution human beings against going to hell.  Personal interests come first. Once, a Third World country, China is one of the super powers and the second largest economy in the world.

It is here that a very recent argument put forward by Tanzania’s President Dr. John Pombe Magufuli when accepting the chair of the Southern Africa Development Community (SADC) in Dar es Salaam comes to light. To fellow presidents and other heads of government gathered in Tanzania to chart the region’s trade integration, industrialization, and job creation, he quipped: “There is no free lunch…”