A perspective on souring Turkey-NATO relationship 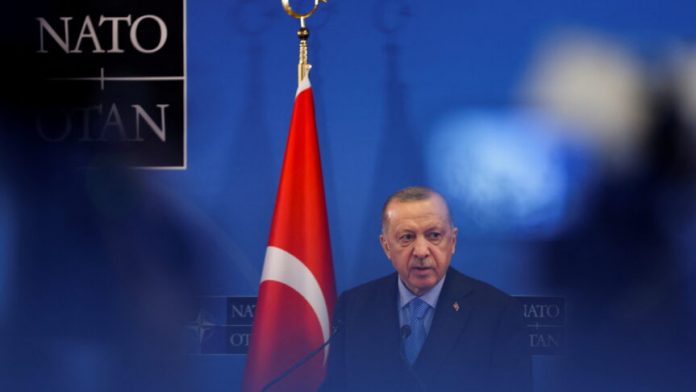 On October 30, in his column titled ‘Lets get rid of this Ataturk-phobia’ pro-government anchorman and columnist Ardan Zenturk has set a new benchmark for conspiratorial thinking in Turkey by claiming that ‘there has always been NATO/Pentagon tutelage since Turkey’s entry into NATO in 1952, which has no connection with Mustafa Kemal Ataturk. Kemalism has always been used as the mere envelope by NATO/CIA plotters to numb Turkey for decades’.[1]

This piece would be a good example of President Erdogan’s ‘Aikido politics’ in Turkey, implying his desperate need to have an enemy to energize politics for domestic political consumption. After consuming the energy of all domestic rivals, his new enemy nowadays seems Western security block in general and NATO in particular by blocking Sweden and Finland on their bids to apply NATO at the face of the Russian aggressive behavior.  NATO’s ‘otherification’ by President Erdogan perfectly first for his political agenda of intermingling established Kemalist-leftist discourse and conservative-nationalist discourse controlling his powerbase under his personal legacy so as to create a ‘Nationalist block’ as Turkey speedily heading to 2023 election or early snap election. Turkey nationalist discourse which naturally needs enemy inside or outside of Turkey can be a card on the table, Turkey-Greece brawl is one of that discourse.

Devlet Bahceli gave a harsh speech in his party session that Turkey doesn’t need NATO and even further goes saying that Turkey did not come to existence with NATO nor vanishes without it. While NATO membership has been so hovering around.

Erdogan’s nationalist discourses are in play and staged by new parties that to many are helping Erdogan to gain upper hand in the discourse war so that can bring some outcomes for the elections, it paved a way for the Mustafa Sarigul leader of Change party, visited Greece, and brandished Turkish flag in front of the Greece Parliament, send messages to the prime minister of Greece. While I was my writing this article. Umit Ozdag, the leader of Victory Party went to the border of Syria to mine the border to stop the immigration. Both leaders took extreme actions to play the discourses that has potential to shape public perception before the Erdogan NATO visit that blocking of Sweden of Finland by Turkey will also be discussed.

Anti-imperialist populist discourse is bread and butter yet not sufficient for the construction of NATO as the new ‘other’ in Turkey. The anti-NATO sentiment prevailing in Turkey has a geo-strategic reasoning as well. In his May 23, 2016, article that titled ‘Is it time for Turkey to leave NATO?’ Ret. Admiral Nejat Tarakci, a well-known Turkish naval strategist with anti-imperialist/nationalist stance, suggests that Turkey should immediately withdraw from NATO’s military wing.[2]  Tarakci claims that NATO’s decision to implement energy security into its concept at the 2010 Lisbon summit and its support for Kurdish separatist PKK militants as well as for Greek Cypriots is directly undermining efforts for global peace and Turkish national interests.

Tarakci has elaborated his thinking after the July 15, 2016, coup attempt and has became one of those ardent supporters of the view that NATO tacitly endorsed the coup attempt, took part in the crime of sheltering/protecting those Gulenists Turkish officers then serving at the critical cadres of the Alliance. He also argues that NATO, the United States and European countries have all come to erode the legitimacy of Turkey’s Syrian and Iraqi borders, withholding support for the Turkey’s fight against terrorism. So, for him and for many retired generals/high-profile bureaucrats in Turkey, since NATO-led Westren security block no longer cares about Turkey’s security concerns, Ankara needs to draw up its own strategic vision, relying on its own power.

Indeed, the crisis between Turkey and NATO fully evolved after the attempted coup on July 15, 2016. NATO’s hesitation in condemning the putschists has upset the Turkish government and the restrained comments of Western countries have aggravated Turkey-NATO relations.A considerable aspect in the current rupture between Turkey and NATO is the ongoing Syrian civil war in Turkey’s immediate neighborhood. As Turkey became more and more threatened by spillovers from their neighbor their decision to work together with Russian forces, while NATO’s member states decided to support, train&equip Kurdish fighters both in Iraq and Syria. This situation in Syria also created a need for an effective surface-to-air missile system to protect Turkey’s border. Despite the fact that US, Germany, Holland and Spain answered Turkey’s call for missile defense system positively to protect the Turkish soil in 2013-2016, Ankara, upset and disappointed, decided to purchase the S-400 system from Russia.

Feeding the anti-NATO sentiment in Turkey

Three are particular sentiments in Turkey that are enforcing country against its Western allies. The first group that has been (re-)gaining influence in the Turkish public and security-related institutions are pro-Russian Kemalists and other like-minded radical left-wing groups. This group has become viable after 2016 coup attempt. The main actor within this perspective is the Homeland Party (VP) of Dogu Perincek, Maoist and staunch supporter of Vladimir Putin and a pro-Russian ideology in Turkey. Perincek and some other high profiles of his party as well as many affiliates within the Turkish military ranks have been imprisoned during the Ergenekon and Sledgehammer trials in 2008-2010, the process that yielded an intrinsic brotherhood between Perincek group and those retired officers arrested and tried. Homeland Party and affiliates are trying to push back the influence of NATO, although at the moment they are realistic enough to agree that at the moment there is no realistic chance from a complete divorce with the Alliance.

The second group, the pan-Turkic perspective does not only reject the influence of NATO, but also of European and Russian imperialism and is building upon the irredentist idea of uniting ethnic Turks in Central Asia under Turkey’s leadership. Pan-Turkic Türkiye Enstitüsü, for instance, claims that it would be in Turkey’s best interest to divorce NATO and move to an axis-less (or non-aligned) status, so it could really follow national interests.

The third sentiment is stoked by President Erdogan and relies heavily on his charisma as a political leader and father figure. He presents himself as the one who can lead the way out of the crisis. The installed narrative here is similar to Turkey’s Independence War 2.0 and interprets Turkey’s current struggle in the post-July 15 setting as a fight against Western imperialism. In his fight to stay in power he resorted in anti-Western sentiment, repressing the fact that only the EU accession process gave way to implement his party’s policies by weakening the old guardians of the state: the military, higher bureaucracy and judiciary.

Is NATO willing to let go of Turkey for good?

What is surprising on this matter is the reaction, or non-reaction, of NATO to the developments in Turkey. The Alliance could have tried to mitigate the situation and to try to bring Turkey back on track, as we are talking about the Turkish military in the Alliance and a geo-strategically immensely important party on the Eastern outskirts of the organization. There has been no sign so far of neither some sort of public diplomacy efforts nor considerable direct support of the Turkish military for its recovery/transformation process in the post-July 15 context. I still cannot figure out why NATO leaders are so strategically shortsighted as they let Kremlin use Turkey as a ‘Trojan Horse.’ Namely, Kremlin aptly creates a structural crisis from within the Alliance by forcing/incentivizing Turkey to change her traditional NATO-centric geo-strategic orientations.

However, from a realist perspective it will be very unlikely for both the Alliance and Turkey to separate their future ways. Although the Turkish government has shown efforts to engage with non-NATO members like Russia, Qatar and Iran through strategic ties, but those engagements are most likely not going to reach an institutionalized level. One reason for that is the strategic culture of Turkish security institutions, which will be hard and costly to integrate into a different military cooperation, making it almost impossible to separate Turkey from NATO.

Also from a materialistic perspective it is unlikely for a complete divorce as the benefits for Turkey being a NATO-member significantly outweigh its costs. Turkey is spending a mere 700 – 800 million dollars per year for its NATO membership but is receiving a several times higher worth of military support.

Therefore, the worst possible scenario conceivable in the coming months is the initiation of a debate in Turkey about a withdrawal from the integrated military command structure of NATO, like happened in de Gaule-led France in 1967. The question at hand is then: how long would the Alliance plan to sit idly and blindly when the Russian political and diplomatic entrepreneurs in Ankara murmuring about the viability of this option to some high-level Turkish ears? Unfortunately, after seeing the strategic communication disaster at the drill at NATO’s Joint Warfare Center in Norway that will surely enable anti-NATO circles in Turkey to weaponize their narratives. I hope that NATO send a strong message to Erdogan regime, and to a possible forming government after Erdogan, to stick the value of the Alliance built over 60 years so, otherwise, Erdogan, his nationalistic coalitions has potential like Putin to disrupt NATO.