HomeExpertsIs this the end of Erdogan’s exploitation of religion?
ExpertsTop Stories On Turkey

Is this the end of Erdogan’s exploitation of religion? 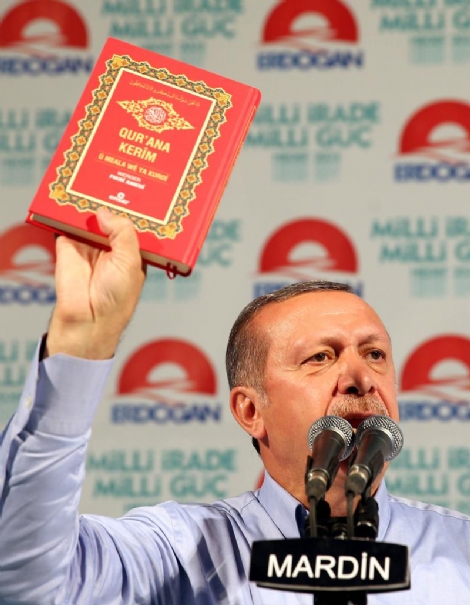 To prevent Selahattin Demirtaş, the presidential candidate in prison, and his friends to be elected to the parliament back in 2015, Tayyip Erdogan was shouting on top of the campaign bus while waving the Quran in Kurdish in his hand, in the cities where the Kurdish population was high: ”These are Parsees, do not vote for them…”

This is not the first or the last time Erdogan used religion for votes. One of the first incidents that caused Erdogan to be widely known in Turkey, was the words of a poem he mentioned everywhere, which mainly focused on the religious symbols such as mosques, minarets, and mihrabs. There isn’t any other politician who abuses the poems of the conservative poet, Necip Fazıl Kısakürek, who had spent many years in behind bars.

Erdoğan did not neglect exploiting the religion even in the night of 15th July coup attempt, which is widely accepted as a conspiracy for many experts. Allegedly, he was teaching Quran to his grandchild at home, while the soldiers started to go out on the streets at around 21:00. Moreover, he was so unaware of the coup, he was informed by his brother-in-law who called him! The media outlets in Turkey, which is widely under his control, published this picture of him.

Whenever it gets politically difficult for him, these pictures of him come to surface. Sometimes while he reads Quran next to his mother’s grave, sometimes praying in the mosque in the garden of his palace in Ankara, which is four times bigger than the Palace of Versailles, and sometimes in the Kaaba wearing white ihram dress…

The same Erdogan shouts at another presidential candidate, Muharrem İnce of Republican People’s Party, CHP (Cumhuriyet Halk Partisi in Turkish), “Show me one single picture of you taken in a mosque in the past?”

The very reason behind this is the pictures taken of Muharrem İnce after the Friday prayers and İnce’s speeches appealing to religious and conservative voters. Ince successfully indicates that it is possible to be a republican, secular and conservative at the same time.

However, Erdogan, who continues exploiting the religion constantly, cannot attract attention anymore with the policies he is carrying out towards exploitation of religion. In early June, for the first time in the political history of Turkey, thousands of people chanted “Thief” to the president-in-office during a rally of CHP’s Presidential candidate Muharrem İnce.

For the second time in Turkey, the opposition block frightens Erdogan dearly. In 2015, the opposition won the majority of the seats in the parliament, but unfortunately the coalition failed to agree to form a government.

It is very significant for the opposing coalition’s name to be “people’s alliance”, which is widely expected to defeat Erdogan in the constituency elections, because after religion, the concept which was exploited most by Erdogan was ‘The People’. They always hang posters everywhere with the slogan “People’s Man” for every election.

This is exactly why Erdoğan is trying to demonstrate Muharrem İnce in front of the public eye as an “irreligious” person.

We had a chat with Muharrem İnce in the garden of the parliament years ago in Ankara, where he told me about an incident he witnessed in Mecca, the holy place of İslam. A Turkish, who sees him in Kaaba, approaches him and asks: “Aren’t you a member of CHP, what are you doing here?”

This is the political İslamist ideology, which indicates the habits of Erdogan and his fanatics. Religion is their monopoly and no one else is a Muslim except themselves. Furthermore, anybody who is not one of them is a terrorist or infidel. That’s why he calls the presidential candidate in prison, Selahattin Demirtaş, a “terrorist”. In fact, everybody knows that Demirtaş is one of the most peaceful individuals of the Kurdish political tradition in Turkey.

Selahattin Demirtaş is not a Parsee, nor Muharrem İnce is irreligious. All the vileness done by Erdogan is a result of his exploitation of religion. Beyond any doubt, there were politicians who exploited the religion in Turkey before Erdogan, but nobody reached his level.

Maybe, we are coming to the end of this worthless exploitation of religion, which inflicts heavy damage to Turkey.