Is Turkey government living or nonliving? 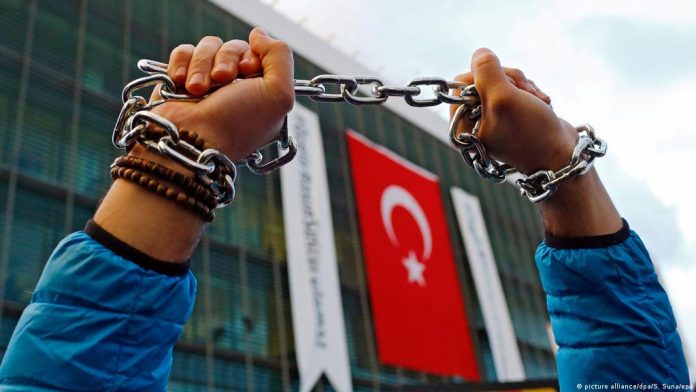 From Washington, Turkey section of the pan world 2021 United States Department of State report on human rights very ably goes beyond what would go as mere allegations. It quotes “credible” lists of incidents of “arbitrary killings, suspicious deaths of persons in custody, forced disappearances, torture, arbitrary arrest and continued detention of tens of thousands of persons…”

It branches into “political prisoners, including elected officials; politically motivated reprisal against individuals located outside the country, including kidnappings and transfers without due process of alleged members of the Gulen movement; (and) significant problems with judicial independence…”

In the echoes of the report two days later, Ankara, through a Turkish Foreign Ministry statement, hits back. It rejects the report calling it “unfounded … unfortunate allegations”. Africa indigenous knowledge has it that when you tell a lie it does not take long to dawn. Indeed, light soon dawned on the government lie. A news agency reports two inmates in Siliviri Prison dying after being subjected to severe beating and mistreatment by guards.

Images are published showing one of them badly injured in a hospital bed.  One photograph shows the victim bruised and with a broken nose. A Directorate General of Prisons and Detention Houses statement gave the cause of his death as “cardiac arrest”. In a sort of state of guilty conscience, however, the statement still said they had started “investigation into circumstances surrounding his death.” What a contradiction? If the directorate were positive about the ‘cardiac arrest’ narrative, what else would it want to conduct the investigation for? The official statement had a very loose end which is easy to untie.

I am not a political scientist. But after going through the report’s executive summary and its accompanying seven sections; reading between provision lines of the Turkish Constitution and zooming on divergent regime practices on the ground, I found myself doubting: “Is the government living or nonliving?”  Memory took me six decades back to 1959 when we had our first go at the study of elementary biology.  After getting the definition of science clear, we went straight into the exercise of differentiating between properties of the living and nonliving.

The report addresses six areas in detail in terms of “respect for integrity of the person; respect for civil liberties; freedom to participate in the political process; corruption and lack of transparency in the government; governmental posture towards international and nongovernmental investigation of alleged abuses of human rights; discrimination and societal abuses; and workers’ rights.”

The Turkish government hit back. A Foreign Ministry statement said all that the report had to say is “unfounded” and “unfortunate”. It rejected it outright. Fine. Forget the past. The question is: “What would the government response be to the following very rent scenarios taking place on the ground? Don’t they provide further evidence to the report?” All these were reported during March and April 2022.

Scenario One: Cases of human rights violations in Turkey in March included 148 deaths and 281 incidents of torture or maltreatment, with 51 of them taking place in prisons, where five inmates also died, according to the monthly Rights Violations Report prepared by human rights defender and opposition deputy Sezgin Tanrikulu.

Rights violations in prisons included denial of medical treatment, deprivation of basic needs, including beds and warm water and forced transfer to other prisons accompanied by strip searches. The problem is aggravated by lack of condemnation from higher authorities leading to widespread impunity.

Scenario Two: The father of a young woman who was killed in an attack at the Kurdish Peoples’ Democratic Party (HDP) office in western Turkey has been indicted on charges of disseminating terrorist propaganda.  The attack came at the time of increased pressure on the party which is accused of links with the PKK, listed as a terrorist organization. It faces a closure case.

Hundreds of its politicians, including two former co-chairs are behind bars on politically motivated charges.  The father has been indicted following remarks he made following the murder of his daughter. His crime is saying that she was the “martyr” of all Kurds.  Where is equal rights for the Kurdish people in Turkey?

Scenario Three: Turkey’s ruling Justice and Development Party (AKP) and its ally, the Nationalist Movement Party (MHP) have consistently rejected almost all motions and bills submitted by opposition since transition to presidential system. Ninety motions have been submitted by the opposition parties and declined by the majority since the beginning of this year.

Turkish switch to executive presidential system in 2017 has granted President Recep Tayyip Erdogan and his AKP sweeping powers, leading to removal of constitutional checks and balances, further weakening the democracy path in Turkey. According to a report of an umbrella Checks and Balances Network of 295 nongovernmental organizations, the presidential system has concentrated power in the person of Erdogan, weakening the country’s institutions, especially parliament. President Erdogan is on record for having signed more decrees than bills that have gone through the parliament. How much remains of the freedom to participate in the political process?

Scenario Four:  Two days after a rare visit by the prime minister of Iraq’s autonomous Kurdish region, Defense Minister said Turkey has launched a new air and ground offensive against outlawed Kurdish militants in northern Iraq. Turkey routinely carries out attacks in Iraq, where PKK has bases and training camps.

Scenario Five: Hundreds of people have demonstrated in several Turkish cities, including Istanbul and Ankara, against a move to close one of the country’s most respected women’s rights groups.

“It is not possible to stop our fight. We are not going to allow the closure of our association,” the secretary general of We Will Stop Femicide, Fidan Ataselm, was quoted as telling the press. Turkey has filed a lawsuit accusing the group of conducting activities that violate the country’s “laws and morals.” The association has come out strongly against President Erdogan’s withdrawal from the Istanbul Convention, which requires countries to enact laws aimed at preventing and prosecuting violence against women. What makes the report’s address to discrimination and societal abuses “unfounded”?  The number of women killed in Turkey last year topped 280.

The report carries a litany of human rights abuse – so much so—that it would have made more sense of the government to hide under the learned brothers’ rule of “qui tacet consentire videtur” — he who keeps silent seems to consent — rather than hide the head in the grasses like an ostrich hoping no one else would see. The people of Turkey need a fairer treatment from their government than what is on stage. The government should have more semblance of a living than of a nonliving public governance system.