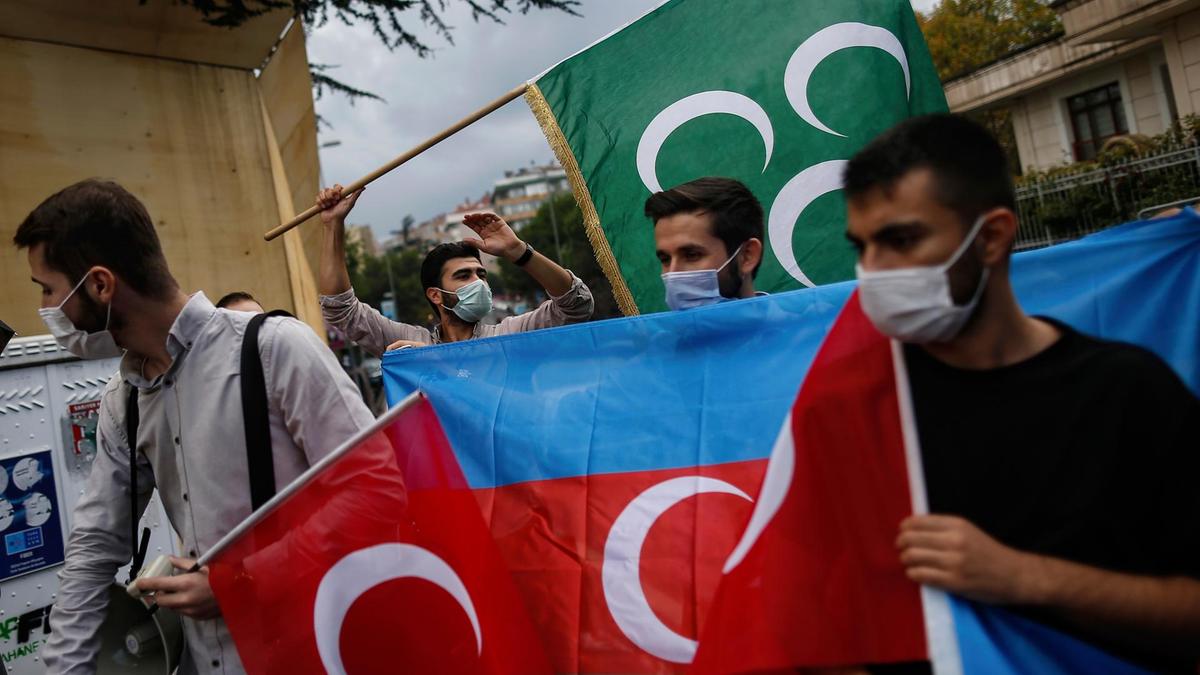 It’s as sad an observation as it could also be true. In Africa we say even the bitter one is for taste. If one were asked to mention the conflict “common denominator” in the Middle East, the Arab world, north of Africa, the Mediterranean and now the South Caucasus, could Turkey be the best bet?

Even in the event of this being right, the question still remains: “But, why Turkey?” Already the leading suspect on the European Court of Human Rights (ECHR) (wanted?) cause list, Turkey has had a hand in Syria, Libya, East Mediterranean and Greece conflicts. Now, the country is at the center of the Armenia-Azerbaijan or vice versa crisis, depending on from which angle one wants to look at it.

And the writing on the wall reads like if peace has to rein again between the warring South Caucasus neighbors, Turkey has to be part of the solution process. In this very case, Turkey backs the Azerbaijan President Ilham Aliyev.

To an inquisitive mind, the Turkey game in the Azerbaijan-Armenia crisis looks like a replay of the Syria and Libya matches’ combinations with slight tactical changes – this time round space and time notwithstanding.

Behind the curtain of the current scene of crisis, Turkey is supporting Azerbaijan in contrast to the influence interests of Russia, which is on the side of Armenia – though not conspicuously military as it did in the case of Syria. But if Turkey is supporting Azerbaijan with arms and other logistics and while remaining a big market for Russia’s arms, it goes without saying that Moscow’s military outfit somehow spills over into Azerbaijan via Turkey. There are also reports on the ground that Moscow has actually already beaten Turkey to the second place in arms’ sales to Azerbaijan – its support to Armenia notwithstanding. Money, money and money is the point at issue.

So in a way Russia ends up supporting both warring parties in the same Azerbaijan-Armenia conflict. Of course, for Moscow this is not a big deal. It’s as easy as taking a breakfast meal. In our East African part of the world we have a live example. In the late 1970s, Russia sold arms to Tanzania and Uganda countries, whose armies were engaged in the Kagera War.

At the end of the day, therefore, what is of interest to the world is what chances there are for the conflict finding a peaceful solution. The chances, with very extreme caution, are slim. The worse thing is that this armed conflict is taking place when the 2020 UN General Assembly (UNGA) has just got into session.

As the norm of the day, the United Nations and its various organs – the Secretary General’s Office and Security Council in particular– have issued official statements. The same applies to the European Union through the EU Council. All these we know have no biting effects on warring and proxy parties.

But for President Erdogan, the conflict is another chance to kill many of his birds with one stone. It is time for him to further display his ‘without frontier concern’ for the welfare of Islam followers.

It is time for him to gain more sympathy from his people. This is an extra chance of making the Turkish people turn away their eyes and attention from what is taking place at home in terms of the rule of law.

It is opportune time for making more money on arms sales to Azerbaijan.

President Erdogan’s entry tangent into the Armenia-Azerbaijan armed conflict has been more tactful. No repeat of the Idlib errors that saw him carry coffins of fallen Turkish troops back home. This time, besides calling Armenia “the biggest threat to peace in the region” thus justifying his presence there, he is on record for deploying Syrian mercenaries.

This is just more than claims made from “enemy” governments of Armenia and Karabakh. The Commander of the Syrian National Army supported by Turkey, General Ziyad Hajji Ubayd, was quoted as confirming to have sent fighters to Azerbaijan. And do you know what their mission is? In his own words, it is “to provide for their families due to poor economic conditions. We are ready to fight everywhere for Turkey’s national interests and security. We defend our interests to achieve our goals.”

Media reports hinted on a private Turkish security company engaging Syrian fighters as border guards in Azerbaijan.  And do you know the figures involved? Gen. Ubaid revealed President Erdogan having provided financial support to more than 70,000 members. One can imagine the impact of this strength being deplored in the Nagorno-Karabakh enclave.

Their salaries are very attractive. Media reports quote between 7,000-9000 Turkish lira against the traditional 450-550 per month. This alone raises another critical question. Where does President Erdogan get all this money from to pay the mercenaries when the economy of Turkey is practically in tartars?

Despite the area being officially recognized as part of Azerbaijan, it is practically governed as an independent state with the ethnic majority of Armenians and supported by Armenia. But the Azerbaijan-Armenia conflict is not all about the age-old ethnic problem. Reading between the lines of what the ‘volunteers’ (mercenaries) had to say, the conflict area is also sitting on oil and gas facilities, which they would also be guarding.  So, now we know. It’s not the question of human rights. There is an added value in the form of oil and gas – the current two leading curses to possess for peace and security.

This could also explain why other world powers like the United States and Russia have adopted a wait-and-see attitude towards the conflict. The US and Russia were with Turkey in Syria. They know what Turkey means in such conflicts. Of course, for the US, faced with the coming presidential elections, the Azerbaijan-Armenia crisis can wait. Why try to pull a kiss from a wife in labor pangs? At the same time President Trump and President Erdogan seem to have special links transcending Washington and Ankara government borders into individual family business interests. Making Russian President Putin put Erdogan on spot is not quite easy. How about the S-400 deals and the like?

Somehow, President Erdogan has been so tactful as to influence Washington and Moscow foreign policy, enabling him to virtually carry any of his missions through without much trouble. The same he has done to fix European countries by using the tangent of threatening to open the floodgates for asylum seekers.

The question is: For how long will President Erdogan be able to comfortably get through with it? Can the world really leave this to time to provide the cure? Of course, it can. But this would not be fair. Which country in the world is above provisions of international laws and conventions to which it is signatory?

Turkey should not be left to develop into a regional conflict “common denominator” – which it has already done for at home with the conspicuous nasty effects.