Is Turkish ‘drum’ set to bust? 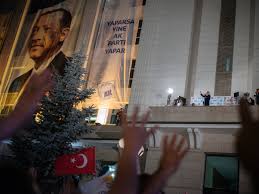 Whatever has a beginning must have an end. For us human beings, if one wants to escape death, one must also have the ability to avoid being born, which, unfortunately, is not possible. The real essence of this goes beyond the birth and death relation concept.  What is at the roots is time. Thus we try to incubate premature babies and prosecute those who attempt to commit suicide and fail.

This universal truth notwithstanding, in the interior of the African hinterland where I was born and bred and where the passing on of the elderly was such a rare experience, there is still room for death prediction.  This works around many factors, among them, ones behaviour in society.

Our indigenous formula compares life to a drum – the musical instrument.  It is set that “when the drum throbs too loud, then know it (the hide, from which it is made) is about to bust.”

I found myself resorting to my rural life experience as I was overwhelmed by disturbing reports emanating from the Arab, Middle East and Mediterranean countries; closing on to a world peace threat. What troubled me most was the ambiance of the Turkish Government and its President Recep Tayyip Erdogan, now almost reading like war envoys.

Finally, a question sprang up in my mind. Namely: “Is the Government or President of Turkey about to bust?” Just trek this trend of events, weigh them against the above indigenous formula and give yourself an answer.

Almost within the tremors of the Syrian bombings, Turkey and the Libyan side recognized by the UN under Prime Minister Fayez al-Sarraj  in November (2019) sign a memorandum of understanding on security and military cooperation. Legislators on either side ratify it.

President Turkish President Recep Tayyip Erdogan subsequently makes a surprise visit to Tunisia, holding a meeting with his counterpart, President Kais Saied. Their agenda is developments in neighbouring Libya, targeting a ceasefire and bringing the opposing forces on the negotiating table.  Out of the blues, President Erdogan, at the same time, hints on sending troops. Troops know no other ‘roundtable’ than the bullet. What was the visit all about?

A day after Christmas, it is a global custom to observe the Boxing Day. It’s a world day for gifts. Turkish President Recep Tayyip Erdogan confirms a troop ‘present’ to the Libya government that is recognized by the UN. “Since there is an invitation right now, we will accept it,” he told members of his AK Party in Ankara. “We will present the motion to send troops as soon as Parliament resumes. God willing, we will pass it in Parliament on January 8-9 and thus respond to an invitation.” Which God is he imploring for war? Isn’t He the God of peace?

On the same day, Interior Minister Fathi Bashagha tells reporters in Tunis, that Libya’s internationally recognised government will officially request military support from Turkey. “If the situation escalates then we have the right to defend Tripoli and its residents,” he said. He sort of puts the cart before the horse.

Erdogan-conversant Russian President Vladimir Putin raises the Kremlin concerns over any Turkish deployment there. He speaks to Italian Prime Minister Giuseppe Conte. Both agree the crisis must be resolved peacefully.

In a separate interview Conte cries foul that a “proxy war in Libya” would, “instead of stabilizing” the North African country across the Mediterranean from Italy, only aggravate the “incredible fragmentation” there.

“I implored Turkish President Erdogan against military involvement.  Any such intervention would give way to an incredible military escalation that would have so many civilian victims and be without a victory for anyone. We can’t accept any military escalation,” the Italian premier told a year-end news conference.

At the same time, Moscow stands accused of having military presence in the conflict area on the side of General Haftar, who has also been alleged to recruit fighters from Sudan. In the words of President Erdogan, Gen. Haftar is a warlord worth a troop deployment response.

Reports from Nicosia condemn Turkey’s plans to dispatch troops to Libya as “unacceptable” as such a move would constitute unwanted meddling in the affairs of a friendly country. Libya’s Parliament speaker Aguila Saleh and his Cypriot counterpart Demetris Syllouris are quoted as saying this would fuel tensions.

Saleh also reiterates their condemnation of a maritime border agreement that Turkey signed with Libya’s Tripoli-based government — but which hasn’t been ratified, as necessary, by the Libyan parliament — as a “flagrant violation of international law that’s devoid of any legal basis.”

The Cyprus News Agency quotes Saleh as saying that Prime Minister Fayez Sarraj has no authority to sign any agreements on his own and that Erdogan just took advantage of the divisions within Libya, as well as Tripoli’s control by “terrorist groups” to get the agreements approved in order to intervene in Libya’s internal affairs.

He accuses Erdogan of provoking countries in the eastern Mediterranean in order to interfere in their exclusive economic zones without taking account these countries’ sovereign rights at sea and in the air.

Somalia’s Security Minister Mohamed Abukar Islow holds a parallel airport press conference. “There are doctors from Turkey some of them went back with the plane but others will remain… Our Qatari brothers will also send another plane,” he says.

Reports put the death toll at 79, including two Turks and 16 university students, and the injured at about 125. The incident occurred a day before at a busy security checkpoint. It is the most grievous since the 2017 attack that left more than 500 people dead.

President Mohamed Abdullahi Farmaajo blames it all on the Al-Shabaab Islamist group, which is bent on overturning the internationally-backed government, terrorizing and massacring the Somali public.

In the meantime, as was expected by anyone well versed with Turkish affairs, the search for parliament blessing to send troops to Libya is expedited. It is tabled and pushed through ahead of time.  Turkey’s Foreign Minister Mevlut Cavusoglu, sets the tempo. He warns that the Libyan conflict risks sliding into chaos and becoming the next Syria. Who wants that?

The Turkish Government or Erdogan’s drum throbs have definitely intensified. Everybody has got the feel of it. The question is: “Will the Africa indigenous observation of the ‘drum nearing the bust’ come true?”  In Africa, it is also held that “the ear which is destined for death (dumbness) does not respond to medication.”