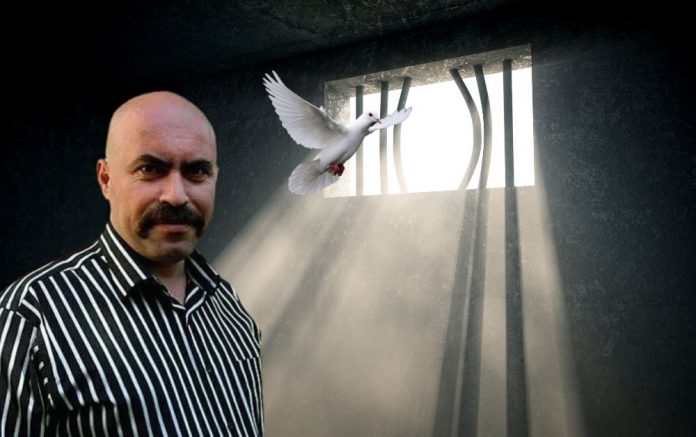 In the ‘thin hours’ of the night, I get a buzz-cum-light WhatsApp notification from   my phone screen.  I reach out of a mosquito net. I check; it’s 04:00.  I wonder: “What’s the matter? Who is that who would like to contact me now?” I swipe the screen and enter my password. I tap on the post. I am led to a link on Twitter where I read: “Court documents show dissident academic with heart disease deliberately sent to die in prison: report…”

The post is accompanied by a landscape photograph.  A zoom on it shows a clean-head-shaven man in a black-striped shirt, wearing a distant inquisitive smile and a mustache. A pigeon is flying against the light coming in through partially pulled window curtains. His face I can recognize because it was much in the news two days earlier.  His name, I don’t remember because even after reading or more correctly gazing at it several times, I still cannot pronounce it. He is called “Tugrul Ozsengul”.

A further tap on the image opens a brief on the report compiled by the Stockholm Centre for Freedom (SCF), a Sweden-based non-for-profit institution delving on human rights issues, particularly in Turkey. Straight from the word go, the report has nothing resembling Tugrul Ozsengul’s smile or linkable to the globally recognized peace-messenger function of the pigeon. It reads the opposite.

According to court documents … academic Tugrul Ozsengul, who died in prison …of a heart attack, repeatedly mentioned his condition in court and told the judge he would die if he had another cardiac arrest there. The court had told him that there was no problem that prevented his incarceration.

Ozsengul first mentioned his heart disease at a hearing in February 2018 and told Judge Kemal Yakin that he would soon be undergoing bypass surgery. His lawyer also stated that his client had difficulty in obtaining medication. Judge Yakin said the court was in possession of a medical report and that it indicated no problem with Ozsengul’s imprisonment, while his lawyer said the report was drafted by an ear, nose and throat (ENT) specialist and that no cardiology examination was performed. WHERE is ethical behavior in making a ruling based on incompetent information?

At another hearing, Ozsengul said he had a heart attack in his cell and that he might not be able to recover if another one occurred. “Your honour, the continuation of my detention means you’re signing my death warrant.” He also narrated his last six-and-half hours’ experience of being taken from prison to hospital by first aid ignorant guards.  The court, however, unanimously decided that he should remain in prison.  WHAT a level of cruelty and insensitivity?

Ozsengul, who died at the age of 56, retired in 2014 from the Police Academy where he was a lecturer. After the controversial July 15, 2016 coup, he was taken into custody and arrested for alleged membership in the Gulen movement. He was sentenced to life imprisonment in 2019. After the Supreme Court of Appeals overturned the decision, he was retired and this time was sentenced to 12 years.   FOR WHAT?

He died in his cell after 15 months’ waiting for the court to decide on his second appeal.  WHERE is the justice delivery system? He left government service two years before the coup. Where does his role in it arise?

Three days before the sixth anniversary of the 15 July 2016coup, six former Air Force Academy cadets who survived the Erdogan-inspired crowd wrath, released a documentary, titled The Blue Bus, denying participation (knowledge let alone) in the incident.  On the heels of the documentary, Turkey’s highest appeals court upheld life sentences on 60 of their colleagues in prison, who have condemned this ruling and called for its reversal.  In their open public letter released on Twitter by a platform for demanding their rights, they want “their rightful cry” to be heard by the public and the Supreme Appeals Court to reverse its “historic, unfair, disastrous and unjust decision.”

They say it is “unacceptable” in any legal order, positive doctrine or set of values for the privates and cadets, who are in the lowest ranks of the army to be tried and sentenced to life in prison for the “coup attempt in which they were mixed up in with all kinds of lies. We appeal to the conscience of society, intellectual morality, media and political ethics, the power of justice and the justice of power … We want the freedom that we deserve.” In the aftermath of the attempted coup, 16,409 military cadets were expelled by emergency decree-laws and 350 were given life sentences, some of which have been reversed.

The dividing line of justice delivery under the system in Turkey remains a mystery. More than 4,000 members of the judiciary have been removed from their employment following the coup on allegations of having links with Gulen or the Hizmet Movement.  One former Supreme Court Judge Mehmet Sait Demiroz, who was sacked and thereafter jailed, died in the third week of last month (July) within the echoes of the sixth coup anniversary after spending a week in a hospital Intensive Care Unit (ICU).

Judge Demiroz was first jailed within the first week of the coup and was released after serving several years due to an advanced lung problem. He was recently re-arrested and sent back to prison after a lung surgery. His wife, Melek Demiroz, kept on pleading for his release due to a risk of a heart attack and multiple organ failure. But her plea could not touch anybody in the Turkish system. He had been handed a 13-year-and- six-month jail sentence on charges related to tourism.

All in all, more than 130,000 public servants have been dismissed, including 4,156 judges, prosecutors and 29,444 members of the armed forces. Justice Minister Bekir Bozdag says 117,208 people have been convicted while more than 600,000 have been subject to investigation in connection with Gulen links since the coup attempt.

The minister’s statements notwithstanding, according to the Stockholm Centre for Freedom, raise more questions than answers. Judicial experts argue that his figure concerns only those that have been upheld by an appeals court because the ministry’s data shows more than 265,000 people were sentenced on the charges between 2016 and 2020.

They conclude: “There have been many people among Turkey’s post-coup victims who died in jail or shortly after their release over the past years because they were not given proper treatment or continued to be kept in prison although they were unfit to stay there.”

That is the mirror through which to view what the cadets still in jail call “historic, unfair, disastrous… and unjust … Turkey…” as the country walks (limps?) to the coming presidential and parliamentary elections, hardly one year away, with cruelty and injustice within full view.