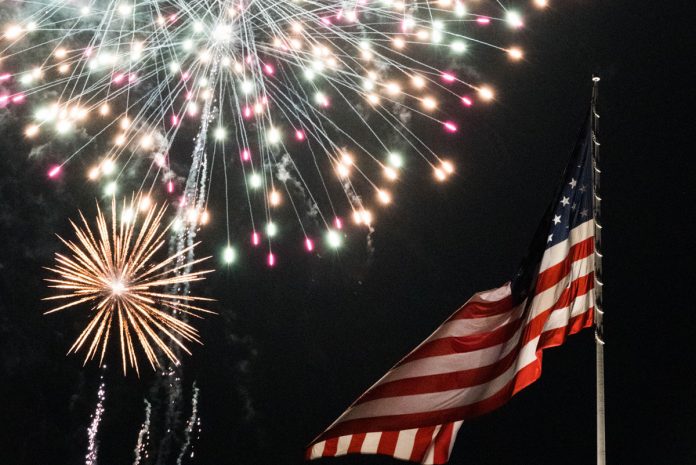 America, as many call her, is a melting pot. Some say it is a salad bowl.

I say it is oven-baked, a bit-spicy tandoori with all the microbial trappings of democracy blown to pieces yearly. A republic still intact, nonetheless, though a flagging democracy she is today, at best.

“Happy Fourth.” as Americans would greet each other, in between barbecues, beer, and this year arguing about gun control and the overturning of Roe v. Wade, and the complexity of making abortion illegal, after women enjoyed the freedom for almost 50 years, to decide what to do with their body. On June 24, 2022, women lost their rights to abortion.

I thought of America and I and below are some of the “non-linear” (yes, there is a narrative genre by that name these days,) notes that I wrote for a week, under the subheading “AMERICAN TANDOORI.” There is also a poem at the end of this meditation on a baking pan of tandoori.

Besides John McLaughlin’s Mahavishnu Orchestra, when I was in college, I was also listening to Jean-Luc Ponty the fusion jazz violinist and went to his concert back in the very early 80s. It was a time of my study of Shakespeare, Dickens, Beaumarchais, Goldoni, and Rabelais as well. But fusion jazz — of Chic Corea’s Return to Forever, Herbie Hancock, Stanley Clarke, and also Carlos Santana (Caravanserai genre) was also my repertoire of exploration of this essentially American artform, moving away from my high school years of Classic Rock — of Deep Purple, Pink Floyd, Genesis, The Who, Led Zeppelin, Emerson Lake, and Palmer, Yes, Rainbow, etc., etc.

When I was nineteen

Studying English Literature, at around nineteen in an American university in the Midwest, I was obsessed with The Romantic Movement/Tradition, reading the Lake poets such as Shelley, Keats, Byron, Coleridge, and Wordsworth. I was then listening to the music of the Baroque, Renaissance, and Neoclassical Periods. But the idea of Nature as Spirit and “god within” fascinated me as I ventured deeper into the meaning of the poetry of the Romantic tradition. What then is this “god within” or the “beauteous spirit” that resides within as too was spoken by the great poet William Blake?

I have not appreciated thunder and lightning this much today, sitting on my porch in the dark, profusely thanking Gangsta Mama Nature with the thunderbolts and lightning (very very frightening me … Galileo Galileo Galileo Figaro … easy come easy go … as the chorus of Queen’s Bohemian Rhapsody goes) like arrows launched by Arjuna and Krishna in the battlefield of Kurukshetra. Yes, nice feeling — after two days of brain-cells frying 100 degrees- weather and heatwave fit from a scene from Al Pacino Day Afternoon? Gracias!

The smell of grass (not weed and its smell of pee) as the rain washed away the tears of Gangsta Mama Nature who was drying up like a huge big-butt raisin in the sky, the smell was nice. Fresh, fresh, fresh, as the prince of Bel-Air.

I sat for an hour just breathing the air of hope and the weather getting nice this week. Angry I was at the global warmers and climate changers who cooked the Earth as if it is a huge bowl of American Chicken Tandoori.

But here is the thing: my delightful karma, without fail. As soon I finished watering all the nice but wilting plants and flowers and herbs and living things in my garden, for an hour watering them with a hose as heavy as an anaconda, singing rain songs, doing rain dance when my neighbor 75-year-old Luciano from Sicily (yes, that was where the future Don Michael Corleone was forced to exile and later married Apollonia and later she was blown up by Mafia gangstas, and so on and so forth), wasn’t looking, as soon as I finished watering and singing and dancing, it rained. It rained. Always, that happens. To me. As if Nature loves to giggle furiously watching this atomized soul struggle like good ol’ Sisyphus. Rolling the rock endlessly, like the Rolling Stones, and Dylan’s words set in harmony.

Nice karma. The rain in Spain falls mainly on the plains…

War of the Words.

What do these terms still peddled these days by those who call themselves social justice crusaders, mean? These are very abstract terms that will need linguistic, if not philosophical scrutiny. I read about these representations a lot these days, especially in the BLM-ALM issue.  How “Black” must one be in order for one’s life to only matter? How “White” must one be in order to be hated by the “colored”?  I don’t understand these “constructs”. So confusing. Do you?

After the Capitol Hill “Insurrection”

America is not going to be the same again after the incident at Capitol Hill. Because America is an everchanging concept, and in the language of Complexity or Chaos Theory, is a social system based on “organized chaos”, fractal geometry of the complexities of a mature democracy. It is a system in which the base-superstructure, (borrowing the term used by V.I. Lenin in his famous essay,) is in constant flux with the interplay between technology, culture, and identity politics.

It is easy to condemn the assault on Capitol Hill and the weeks of BLM-Antifa nationwide mayhem as work of thugs and bigots and supremacists and all, but that is just a picture of an ugly head rearing itself. It is easy, understandably, to blame Donald Trump as an enabler of these violent acts of the Post-industrial-informational Age as the instigator of these violent and “un-American acts.”. Easy to say these — if one’s consciousness for a long period of time is glued to the TV and now the Internet. These two machines of perception shapers and distorters par excellence of our time. They are us.

How do we then read the incident at Capitol Hill with fresh new eyes and brand-new analysis, beyond what the anti-Trump corporate media is telling us as well, and beyond what the “Progressive-Liberal” media and its ideological apparatuses are trying to make us believe?

So– what is the central issue in America today?

What is she, then?

Those are the notes I am sharing, as sat thinking of what America is essentially and whether anthropologically it is possible to characterize America.

Is it a salad bowl?

Is it a melting pot?

Is it a baking pan of tandoori?

Or – is she now guns and roses?

(poem written while away from the land of the free)

AMERIKA
how have you been lately?
Like McD … thank you for supersizing me
Like a Dunkin Donut … you run on it
Like Coke, you teach the world to sing, in perfect harmony
Like Nike …  you tell me to just do it!

written in transit in Istanbul, Turkey