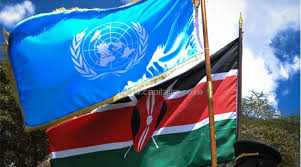 The disempowered others received 10 rotational slots, based on regions, every two years to contribute to global policy-making at the Security Council. The competition for regional chances can be stiff. And Kenya, despite African Union endorsement, faced stiff opposition from Djibouti.

There were accusations and counter-accusations of bad faith as each country campaigned hard for the UNSC seat. The campaigns brought out needed diplomatic skills, letting the world know that Kenya was eager for the seat. First, Kenya convinced the African Union that it was capable of upholding pan-African interests at the Security Council by garnering 37 votes to Djibouti’s 13.

Initially, Djibouti accepted defeat only to turn around days later, seemingly at the behest of forces outside the African continent. The Djibouti about-face forced Kenya to work extra hard to reach out to as many ‘small countries’ as possible, to hold lobbying conferences in New York and in Mombasa and for President Uhuru Kenyatta to tout his pan-Africanist credentials. Kenya mobilized some of its closest allies and convinced enough countries to switch sides and support its position.

Close to the voting day, there appeared to have been concerted efforts at the top to ensure that the seat did not slip. Kenya could not relax in part due to the realization that some hostile extra-continental forces were using Djibouti as a proxy to undermine its interests. Besides mounting intensified diplomatic media campaigns, President Kenyatta showed up to push the international button.

Djibouti and her allies should be commended for making Kenya to wake up and not take things for granted. Although the AU had taken a collective position, Djibouti showed that the said agreement was not necessarily binding to member states. Maintaining the sense of African togetherness at the UNSC will be challenging for Kenya which was elected on the assumption that it represents collective African interests. Having taken two rounds of secret voting to clinch the seat, Kenya is internationally in the same situation as its domestic voting where a substantial minority is enough to make the winner uncomfortable.

Three times in Kenya’s voting pattern, in 2007 and twice in 2017, the loser had significant following that destabilized the winner into inactivity. Since the Djibouti vote was not small, it cannot be ignored in the corridors of the UNSC and it is in Kenya’s interest to ensure the country has little reason to be a nuisance. Kenya and Djibouti have started on the right footing, exchanging pleasantries and African comraderies and the expectation is that it will remain so.

While self-congratulations on the part of Kenya are in order mainly because of the hard work that had gone into the campaign, it would be foolhardy to relax and rest. The Kenyan diplomatic brilliance shown in this campaign is similar to the one in the 1970s that brought the UN environmental campaign to Nairobi.

Keeping the UN headquarters has had its challenges, some externally manufactured and others internally induced. With forces trying to divide Kenya and other African countries, vigilance at the UNSC is required. This implies putting the best foot forward in terms of consistency, diplomatic skill and intellectual prowess in order to be an effective player in global agenda setting.

Kenya has roughly six months to prepare its agenda for UNSC, before taking its seat. The challenge for preparing that agenda, however, rests with Uhuru and his Foreign Affairs team.

Kenya has a reputation for taking principled positions on tricky international issues. It should not go to the UNSC to rubber-stamp policies generated elsewhere or to have its nose counted when it comes to contentious world issues. Kenya’s and Africa’s interests must come first.