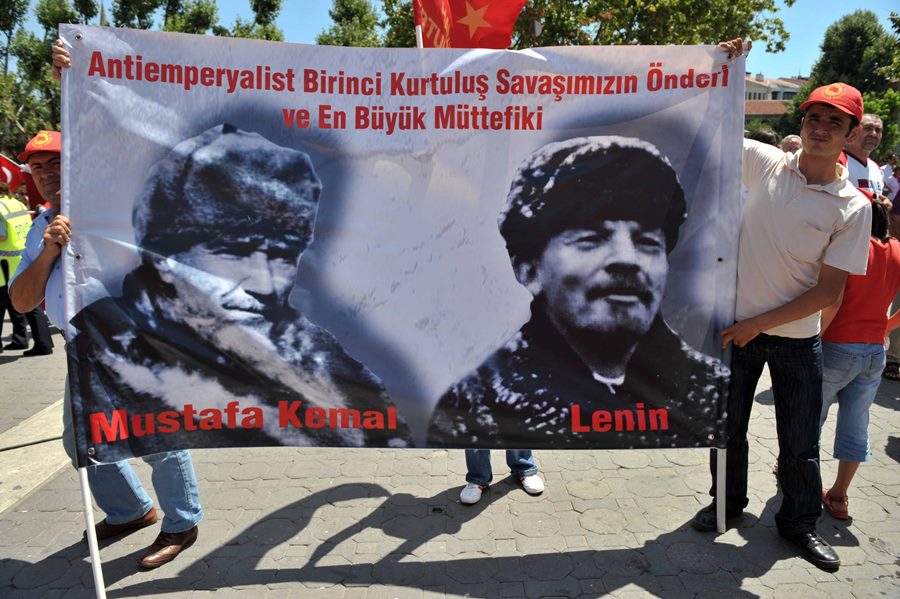 Leftism is a very inclusive yet confusing category. Although modern leftism does not categorically reject Marxism, many tones of leftism still influence political structures and societies.

The basic assumptions that constitute the ideological nucleus of leftism are: 1) Humans are social beings in nature. 2) The capitalist system conflicts with the human nature of cooperation which is also socio-centric. 3) The capitalist system creates social inequalities in a loop again and again. Leftists believe that this structure is pathological. And they have the vision to create a world that people have the same or similar socio-economical means.

Leftists are human-rights centric which is a product of a universal and rational mind and they are not interested in traditional or religious ethics. But this does not necessarily mean that ethics and law based on religion are rejected. But they think that some of these rules cause inequalities and injustice and they defend enlightenment and egalitarian values against these norms. Rightists want to maintain the current social norms and institutions. They adopt traditional structures like the custom and religion. That means they are on opposite sides with leftists. Having said that, rightists do not always want to maintain the current political system while leftists do not always try to change it. This can change according to the socio-economic circumstances.

Leftism and liberalism are products of enlightenment and modernity. But we should differentiate between libertarianism and the approach of the laissez-faire economy. Libertarianism is center-left. It has many common points with Western democratic socialism and social democracy. For example, the European left adopts libertarian policies about fundamental human rights and the rule of law. But this is not the case for the Marxist/Leninist revolutionist leftists.

The Soviet-type Leninist state practice created significant divisions within the leftists in the world after the October Revolution in 1917. The main fault line was between revolutionists and libertarians. To make it simpler, revolutionists defend proletarian dictatorship. They are totalitarian and they want to stamp out other political opinions and ideologies. They think that bourgeoisie and other social classes should be neutralized to abolish class differences.

On the other hand, libertarians think that social change should be ensured by evolution rather than revolution and they have a reconciliatory approach. This ideology is evolved into social democracy or democratic socialism in Western Europe. They do not reject the concept of a pluralistic society and they believe in a social struggle within a multi-party and cosmopolitan environment. Both of the main fractions have the vision to ensure economic equality within the society. Marxist/Leninist revolutionist leftists aim to materialize this vision via a totalitarian state ruled by the proletariat. On the other hand, libertarians follow a strategy to come into power by democratic means and ensure social equality through reconciliation with other political groups and gradually.

The Frankfurt School, which developed the critical theory, rejects the orthodox revolutionist proletariat. Max Horkheimer, Herbert Marcuse, Theodor Adorno, and other scholars of this group think that leftism and Marxism are on different tracks and they defend the liberalization and progress of humans. Enlightenment (Aufklärung) and related values form the basis of the European leftist ideology. Emancipation (Emanzipation) of individuals is a primary objective among these. According to the Critical Theory, progressivism means the emancipation of the individual. To emancipate, traditional structures like religions, fascist states, authoritarianism, patriarchal family, vulture capitalism, etc. should be sorted out and neutralized. Because these structures prevent the emancipation of the individual and the society. The key point in the fight against authoritarian structures is to allow enslaved humans (without even realizing it) to return to their selves.

The theorists of the Frankfurt School had to flee Nazi Germany in the 1930s and went to the USA. So, we can understand why they are against authoritarianism in the contexts of sociology and state politics. Therefore, although it has Marxist roots, the Critical Theory has a clear stance against the revolutionist and Leninist-type Soviet state because of its totalitarian approach. They think that religion is an obstacle on the way to emancipation, but they defend religious freedom because of their strong belief in fundamental human rights. The European left also showcased practical implementation of this approach.

Political liberalism has contributed a lot to supporting individual rights and freedom and balancing the power of centralized governments that tend to become despotic. But they had a vision of a self-balancing economy. Leftists helped them to develop the concept of a more structured and controlled market economy. As a result, the Marxist criticism of capitalism enabled the market economy to be tamed. For example, the struggle of workers for decent work has won. Reforms like job security, unemployment allowance, retirement, health security, and free education were possible because of these criticisms. As the Frankfurt School says, the existence of humans based on labor-production is liberalized. The phenomena like gender equality, racism and religious discrimination are restricted and weakened thanks to the secular state as well.

Liberal progressivism could not seep into the Middle East. As a Middle Eastern country, Turkey is full of political currents that adopt all authoritarian characteristics of the left. The nucleus of the Turkish left consists of downward authoritarian approaches. Kemalist-fascists and Soviet-type Leninist-Stalinists are two main fractions of the Turkish left. The first fraction is more than the second one among the grassroots of the Republican People’s Party (CHP). These fractions do not adopt liberal values and they do not pave the way for freedom. Of course, we cannot claim that they only have a negative influence. But modernization strategies based on social engineering will not achieve their aim just like was the case in the Soviet Union and other oppressive regimes.

The project of building a secular state and society of the Turkish leftists was the most promising one but it also failed. Both Kemalist and Marxist Turks rejected the liberal democracy, and the Turkish state became a Leviathan fighting against freedom. Just like Soviet counterparts, Turkish leftists are against freedoms, they are statists and they do not focus on human rights. The most typical example is the assimilation and ethnic-nationalist policies applied to Kurdish freedom claims. Neither the Turkish left nor the global left is progressive when they cut their ties with libertarianism. And there is a significant gap between this mentality and the European left.

I decided to write on this topic after I criticized Turkish rightists with a Twitter post for their unprincipled behavior. As a leftist, I should know our faults before blaming them for theirs. So, I wrote this piece. We should continue to analyze the left and the right political approaches in Turkey. I would like to take this opportunity to pay my respects to Ahmet Altan and Selahattin Demirtas who have contributed to bringing the Turkish left closer to the universal values.