Libya: Separating the witch from mourners 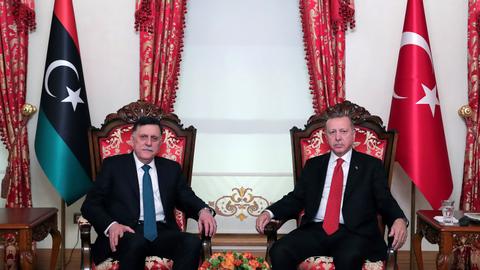 It is a worthy stop-press news item. Berlin is back in the global news. It is to play host to a conference on the Libya conflict after the failure of Moscow to deliver the goods. From the African perspective, indigenous knowledge has it that he who has had a snake bite beware even a single grass straw blowing in the wind.

It is the Berlin Conference that partitioned Africa in the 19th Century. Could the Berlin Conference on Libya end up being a replay, dividing the north-African country in the Mediterranean region? Could we end up with Libya of the UN-backed Government of National Accord (GNA) under Fayez Al-Sarraj and Libya of General Khalifa Haftar?

With or without the Berlin Conference on the Libya conflict, it pays for the world to look beyond what is happening on the ground.  That is what tells the real story. Why is the Libyan conflict status where it is today?

To get to grips with the story, there are several major questions that beg answers. These are, to mention a few: “What makes Moscow and Ankara play an active role there? Have they turned Libya into another Syria? And, if so why? What fell short in their Syria mission that they now want to achieve in Libya?”

In Africa, there is also a saying that: “It is the witch who yells (more than the bereaved) at the funeral.” The Libya conflict has two internal opposing sides. That is natural. Otherwise, there would be no fight. But, Moscow gives support to Khalifa Haftar, the military commander on one side, while Ankara props up the other, under Fayez Al-Sarraj, who also enjoys the backing of the UN and international community.

With a tongue in the cheek and strangely enough, Moscow (Putin) and Ankara (Erdogan) agree that “lasting peace and stability in the country can only be achieved by a Libyan-led and Libyan-owned political process based on sincere and inclusive dialogue among Libyans.”

Both hold that “seeking a military solution to the ongoing conflict in Libya only causes further suffering and deepens the divisions among the Libyans.”

So, what do they do? It’s time for a funny and dangerous game. It runs as follows:

The bottom line is a general agreement on a ceasefire and sharing of concerns that regional tensions are likely to deteriorate with potential spill-over across borders. It is against this background that Moscow ceasefire talks are planned and held.

What takes place in Moscow is another interesting story. Reading between the lines, Sarraj is said to have signed the agreement. Haftar wants to have a look at it first. He leaves Moscow without signing it.

Could that really have been an agreement? Who drafted it? Which meeting was held, where and by whom? Could it have been a Moscow-Ankara craft without the knowledge of Sarraj and Haftar? At what point in the negotiations – if there were any—did Sarraj sign the ceasefire agreement in the absence of the other party?

Could this provide a clue? Every criminal leaves a lead behind. Otherwise nobody would take trouble to create investigations departments. A Russian Foreign Ministry reveals: “In line with the agreements reached in Istanbul between the Russian and Turkish presidents, the Russian and Turkish meeting held at the level of heads of the foreign and defense ministries, devoted to the Libyan settlement, began today in the Foreign Ministry’s Reception House. The representatives of the Libyan sides have arrived and will soon join the talks.”

In media world, we hold that a picture is worth a thousand words. Another thing that escapes media practitioners is that, other things remaining equal, the picture also tells more truth than any number of words. The posted picture about the event shows Russian and Turkish delegations sitting in front of each other and empty seats with a ‘Libya’ sign placed on one of them without indicating who would occupy them.

No wonder the UN proposal for a “ceasefire monitor” was something overtaken by events. For come midnight on January 12, there was practically nothing to monitor about the much-orchestrated ceasefire between conflicting sides in Libya as part of the initiative of Russian President Putin and Turkish President Erdogan at their Istanbul summit four days earlier.

It is in the aftermath of this Moscow mess, so to say, that Germany offered to rescue the situation on behalf of the world. Moscow, the Haftar supporter, was quick to fill in the gaps by saying the meeting was not final but rather part of a Libya peace process due for further address in Berlin at the invitation of German Chancellor Angela Merkel.

The problem now became how to interest the general in the Berlin leg in which the United States Secretary of State Mike Pompeo is expected to take part. Haftar is a real field marshal. He visits Athens. Greece is somehow an aggrieved party in the sideline of what is happening in Libya.

It is not happy with the maritime and military cooperation deal signed with their regional rival Turkey. This is a potential ally in the Mediterranean region. It also has a voice in the European Union – the voice which could effectively frustrate any Libya peace efforts.

The general is very likely to attend the Berlin Conference on Libya, even if he is not interested in the ceasefire because he is winning on the ground. But the world has questions to put to Moscow and Ankara. What are they doing in Libya?

What we can see is something like a systematic dishonesty. Moscow has mercenaries in Libya. Turkey is sending troops there. Terrorists who were engaged in Syria are slowly moving into Libya. What should the EU see coming? How difficult is it for them to cross into Europe? And would that not be one up for Moscow – to see a destabilized NATO ally region?

As of now, the Libya conflict is on record for the lives of about 300 civilians and 2,000 fighters on top of thousands of displaced persons. Isn’t that enough? Russia and Turkey should stop acting the witch in the Libya conflict. What the world had in Syria from them is enough. Libya is now in need of real mourners. Not the witch mourners of the Moscow and Ankara models.